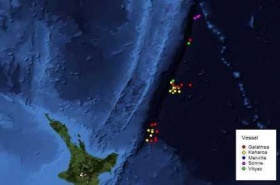 Map of the area, showing the sampling locations of previous expeditions

Sampling in the Trench dates back to two global expeditions of discovery: the Danish research vessel Galathea II in 1952, and the Russian Vityaz in 1958. These vessels carried out 13 shots, trawling as deep as 9900m. There followed a period of several decades where the world’s trenches were almost “out of sight, out of mind.” However, this started to change in the 1990s, as scientific interest in the biological role of trenches increased – to discover what animals lived in the deepest parts of our oceans, and how they were adapted to cope with the extreme depths.

In 2001, there was renewed sampling in the northern part of the Kermadec Trench with a U.S. expedition by scientists on the Melville, which was followed in 2007 by the German research vessel Sonne. These surveys deployed free-fall benthic landers, similar to the ones we will use on this voyage, to photograph and sample animals attracted by the bait. The results showed a diverse and abundant amphipod fauna, and photographed a species of snailfish (Notoliparis kermadecensis) that lives only in the Kermadec Trench.

This work set the scene for a more extensive research programme, termed HADEEP, of which the current voyage is the fourth in a collaborative venture between the University of Aberdeen and the National Institute of Water and Atmospheric Research (NIWA), and using NIWA’s research vessel Kaharoa. These surveys have to date sampled 33 locations along a gradient of depths to describe the fauna and to determine how the species composition changes within the trench.

Life in the Trench was almost unknown a decade ago, but is now one of the best-sampled trenches in the world. However, while our knowledge has improved, there is still a lot to learn about the structure and function of hadal communities.