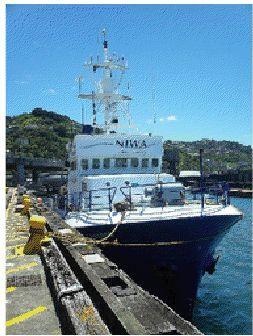 Greetings from the RV Kaharoa, voyage KAH 1301. There is not much to report scientifically today as we are still transiting to the first station.  We left Wellington Harbour yesterday and sailed through the Cook Straits and up the east coast of New Zealand’s North Island. We expect to get to the Trench soon.

Most of the daylight hours today were spent somewhere in the vicinity of Cape Turnagain and Cape Kidnappers.  By late tonight we should be turned upsides down by weather off the East Cape before a day of plain sailing out to the Kermadec Trench.

This whole area has of course quite a nautical history with the Capes Turnagain and Kidnappers and the straits being of the Captain James Cook legacy; it’s all a bit ‘Cooky’ as I like to say.

Similarly, the trench indirectly gets its name from swashbuckling adventures on boats. It is named after the adjacent Islands, which are named after an 18th century Breton navigator-fellow called Jean-Michel Huon de Kermadec (1748-1792), who went there in the 1790s on the Bruni d’Entrecasteaux expedition on the premise of doing something important but decided instead to go gallivanting and name every plant, animal and island he found after himself, only to find out later that this did not increase his h-index.

The trench is ~1200 km long with a maximum depth of over 10,000m, making it the fifth deepest trench in the world – an impressive crack in the Earth!

It is nice to be cruising in such a nautically historic part of the world, with the beauty of it all only temporarily shaded by the fact the RV Kaharoa handles the sea like an inflatable pig; officially described as ‘lively seaway’.  But we love the old girl, happy days.

About the Author: Dr. Alan Jamieson is a lecturer at the University of Aberdeen, U.K. His research focuses primarily on the use of novel deep-submergence technology for deep-sea biological research, particularly at hadal depths (6,000 to 11,000 meters deep). Dr. Jamieson is the leader of this expedition, which is his tenth one to hadal trenches.