This year, schools all across the country will have access to healthier school meals in their cafeteria. We chatted with Libertad Mendivil, a student chef from Denver, about healthy school meals and eating. The teen is a finalist from Cooking Up Change, a competition in which high school students compete to make healthy school meals that are tasty for students and affordable for school districts. 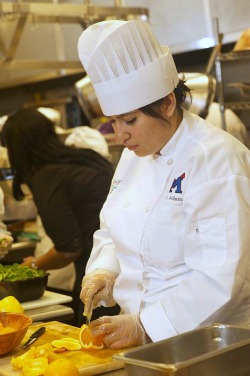 Kids' Safe and Healthful Foods (KSHF): How did you get involved in the Cooking Up Change Competition?

Libertad Mendivil: Cooking is something I've always been interested in, so it was a program that I wanted to get involved in. At first I thought it would be just a one-time opportunity to cook, but it turned out to be this awesome competition, a great trip to DC, and a way to meet other awesome kids.

KSHF: So had you thought about eating healthy before the competition?

Libertad Mendivil: I had considered it; I'd say I need to eat healthier, but never went through with anything. I didn't have resources or recipes until I joined the competition. I then learned that eating healthy was a bigger part of who I am than I thought.

KSHF: What did you learn?

Libertad Mendivil: That we kids really aren't that different. Many of us look for something healthy in our lunches and something that's not just frozen then heated up. We all want the same thing and now, we have a voice because we got involved.

KSHF: If you had any message to give to a policy maker or President Obama, what would it be?

Libertad Mendivil: To put stoves in our kitchens.  Without proper equipment, it makes sense why we have frozen food over real cooked food.