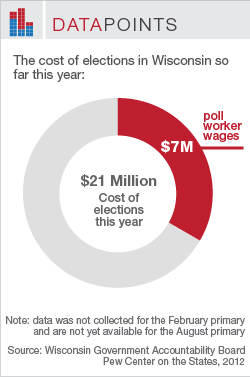 Democracy does have a price tag—at least for the costs of running elections. In Wisconsin, the Government Accountability Board (GAB), the state’s election agency, has made a concerted effort to collect cost data. Why? The GAB provides several reasons:

State law requires the GAB to collect a certain amount of elections data, which they now do electronically, from Wisconsin’s 72 counties and 1,851 municipalities, and in April of this year they started to collect cost data as well.

Officials note these data may not be perfect – jurisdictions may interpret reporting instructions differently and may not provide the most up to date information. Nevertheless, Wisconsin’s effort to collect and share elections data is, to date, by far the most extensive in the country.

And what have elections cost in 2012? The state has data for three elections (data was not collected for the February primary and are not yet available for the August primary) so far this year – the April presidential primary, the May recall primary, and the June recall elections. Price tag for each - $7.6 million, $6.3 million, and $7.2 million respectively, for a total of more than $21 million. Of this $21 million, one-third, or $7 million, was spent on poll worker wages, $5.5 million on staff salaries, and nearly $2.7 million on ballots.