Like many fishermen, I've used menhaden, or “bunker,” as bait. It's hard to believe, but when you're holding one of these small, oily fish, you're holding a big piece of history. Menhaden have had a major impact on the economy and ecology of our Atlantic coast for centuries, supporting a multimillion-dollar fishery, enriching crops on the land, and feeding nearly every creature in the ocean, from striped bass to humpback whales.

Now this historic fish faces its own pivotal moment. Menhaden numbers have plunged nearly 90 percent over the past 25 years, and the regulators responsible for their management will soon make a critical decision. In December, the Atlantic States Marine Fisheries Commission (ASMFC) could finally help the depleted population recover by setting a coastwide, science- based annual catch limit.

This moment is eerily similar to an episode from the history books.

By the late 1800s, menhaden were already important to farmers and controversial among fishermen. The fish had long been used to fertilize fields and dozens of processing plants from North Carolina to Maine churned boatloads of menhaden into plant food and oil. 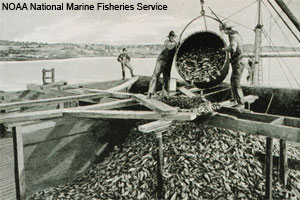 This industrialized fishery scooped up the fish in unprecedented numbers, angering other fishermen who said their catches were being depleted. The U.S. Fish Commission convened in 1895 to sort out the menhaden mess and the commission‘s report set the scene:

Probably no fishery on the Atlantic coast has attracted more attention, occasioned more discussion, and been the object of such marked opposition.

Parts of the century-old commission report read as if they were written today. Then, as now, the menhaden industry denied they were causing any harm:

“The fishery has encountered great opposition on account of its supposed injurious influence on the abundance of other fishes...The menhaden fishermen contend that there is no proof.”

Faced with contradicting claims, the commissioners did what commissioners have long done. They called for further study, explaining:

“It appears probable that the menhaden fishery will for some years at least be the object of…controversy.”

They sure got that part right. The controversy persists 117 years later, and the menhaden's decline reverberates through the ecosystem.

Today, menhaden still make up the largest fishery on the East Coast by weight, even though only one processing plant remains along the Atlantic. Boats supplying that factory take about 80 percent of the total Atlantic menhaden catch, which is ground into feed for pets, livestock, and fish farms. Menhaden oil goes into Omega-3 nutritional supplements. But the menhaden's ability to feed other marine creatures is still at risk.

As early as the late 19th century, scientists realized that menhaden matter most in the ocean food chain.  In his 1880 book, “A History of the Menhaden,” naturalist G. Brown Goode observed fish and birds feasting on menhaden schools and wrote that “their mission is unmistakably to be eaten.”

Whales and dolphins, terns and ospreys, bluefish, cod, and tuna—all depend on these filter feeders to consume plankton and convert the energy into fat and protein. Diet analyses show that many of these predators can no longer find as many menhaden to eat. Yet this crucial component of the ecosystem is still not managed with modern best practices.

That could change come December, when the ASMFC can set strong catch limits and require adequate monitoring and accountability. 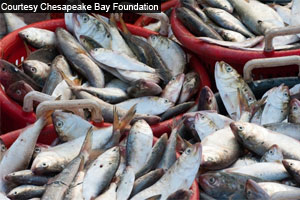 At their last meeting, the commissioners were tempted to repeat the mistakes of the past and postpone action. But the ASMFC instead agreed to consider a very important idea: a coastwide limit on the total menhaden catch. The broad outline of wise management is taking shape, in part because of many of you.

Last year, more than 90,000 people called for stronger protection, and the ASMFC responded, setting a management goal that would put menhaden on the path to recovery.

This is the long-awaited moment for menhaden when the commissioners can write a hopeful new chapter for this historic little fish. Far too much is at stake to allow further delay.