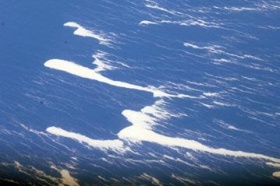 An aerial view of the pumice “raft.” Photo Nicole Munro

I was on the bridge of the HMNZS Canterbury, chatting to marine geologist Helen Bostock about the line of underwater volcanoes tracking 130 nautical miles to the east of us, when we heard Commander Sean Stewart give the order to change course. We were about 25 hours’ sailing north of Auckland, en route to Raoul Island, an active volcano in a line of mostly underwater volcanoes known as the Kermadec Arc.

The GNS Science volcanologist who was to join the voyage had been recalled to respond to the Mt Tongariro and White Island eruptions. Bostock, who works at Niwa in Wellington, became the ship’s de facto volcano expert. Stewart briefed us. A maritime patrol aircraft flying from Samoa to New Zealand had taken an aerial photograph showing what looked like a vast expanse of white sediment floating just south of the Kermadec Islands. Bostock suggested it was a deposit from an underwater eruption.

Later that day, after we spotted the first streams of pumice, the crew collected samples using plastic buckets dropped over the side of the ship. We thought the main pumice deposit had dispersed, but about midnight the 9000 tonne ship ploughed straight into a raft of pumice. It stretched as far either side of the ship as the watchkeepers could see with the ship’s spotlights and lasted about half a nautical mile. I blogged about it and the Navy sent out a press release. Soon, reports were travelling the globe about a floating slab of pumice the size of Belgium.

Contrary to some reports, which described a solid island of floating pumice, the “raft” we sailed through was a dense agglomeration of pumice pieces, most ranging in size from golf ball to soccer ball. Unlike the rounded pieces of pumice from the Taupo eruption, which are found on beaches all over New Zealand, these young rocks were rough around the edges and irregular shapes. The pumice caused a lot of excitement, but this sort of thing has been seen before, says Richard Wysoczanski, a Niwa marine volcanologist who has been studying the Kermadec Arc volcanoes for 15 years. “It’s a very active sea floor,” he says. “Since 2006, there’s been at least one known eruption a year.”

Further north, pumice from a 2006 eruption at Home Reef, on the Tongan Arc, formed a 440sq km floating mass that travelled more than 5000km in eight months. Wysoczanski encountered the “raft” on a voyage from Fiji to New Zealand. He describes it as “surreal … beautiful … like sailing through a bathtub full of floating bits of pumice”. We saw the first pumice streams on August 9, but Nasa satellite images and geophysical evidence suggest the pumice encountered by the Canterbury came from a July eruption of Havre Volcano, whose summit is 1000m below the sea and more than 200km south of Raoul Island. Final confirmation is a few weeks away.

By comparing the chemistry of the pumice with the known chemical signatures of Havre and other volcanoes in the Kermadec Arc, Melissa Rotella, a PhD student at Victoria University of Wellington, will work with Wysoczanski to try to confirm the Harve origin. “If it doesn’t match, we’ll find another volcano that does,” he says. In the meantime, the pumice raft is likely to continue following the prevailing currents until the pieces are dispersed across the ocean, become waterlogged and sink or wash up on a beach near you. 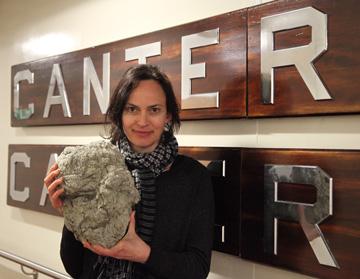 Rebecca with a piece of retrieved pumice. Photo Helen Bostock