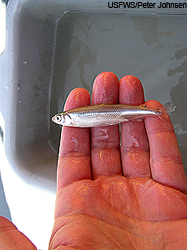 Small fish such as sardines and anchovies don't get much love. But these little fish provide essential food for all the marine life that we like to catch, eat or watch. Unfortunately, most fisheries managers haven't thought too much about these prey fish, either—until now, that is.

On the West Coast, the Pacific Fishery Management Council will meet in June and consider new management options it could develop to safeguard prey species that aren't currently protected, even though they occupy a crucial position in the marine food web. The public is also starting to pay more attention. The council received more than 14,000 comments from people around the country who want stronger protections for the little fish that sustain bigger fish, seabirds, and marine mammals. The council now has a chance to demonstrate its leadership to fellow fishery managers around the world.

Forage fish, which also include species such as saury, smelt, and sand lance, eat tiny plants and animals drifting near the surface and turn them into protein that is consumed by everything else higher on the food web, including recreationally and commercially important big fish such as tuna, halibut and salmon.

The Pacific council's consideration of this issue follows the release of new science demonstrating the vital importance of small fish to marine ecosystems. The report, issued in April by the Lenfest Forage Fish Task Force, noted that forage fish account for 37 percent of the total global catch of wild marine fish and are mostly used to feed livestock, poultry, and farmed fish. (The Lenfest Ocean Program, established in 2004 by the Lenfest Foundation, is managed by The Pew Charitable Trusts.) The scientists noted that, in general, current management measures are not sufficient to protect these important species as demand continues to grow. They also calculated that forage fish are worth twice as much in the water as they are in a net because of the importance of the commercially valuable fish they sustain, such as salmon, albacore tuna, and cod. Moreover, this is a conservative estimate, because it does not account for the value of recreational fishing or other activities supported by forage species, such as birding or whale watching.

The panel also said fishing should not begin on forage species that we know little or nothing about. Surprisingly, that common-sense approach has not caught on with fisheries management.

The Pacific council has an opportunity during its June meeting to make forage fish management a priority and to promote a healthy marine food web. Protection of these species is an essential step toward sustaining a rich and productive ocean ecosystem for generations to come. After all, little fish do matter.