In March 2010, Interior Secretary Ken Salazar directed the U.S. Geological Survey (USGS) to assess the state of Arctic marine science. Described as part of a comprehensive, science-based approach to offshore energy development, the evaluation was to help guide decision making on oil and gas activities in the Beaufort and Chukchi seas off northern Alaska. 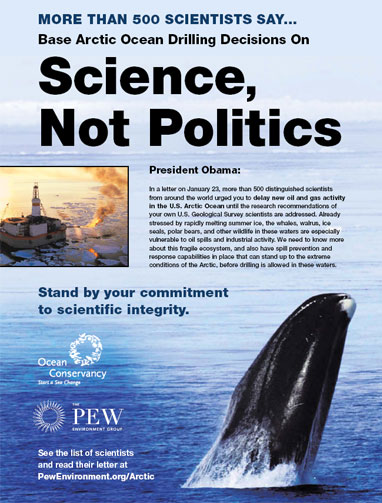 Now, more than 500 distinguished U.S. and international scientists—including renowned oceanographers Sylvia Earle, Paul Dayton, and Alan Springer—have signed an open letter (PDF) urging the Obama Administration to follow through on its stated commitment to science by acting on the USGS recommendations.

“Doing so prior to authorizing new oil and gas activity in the Arctic Ocean will respect the national significance of the environment and cultures of U.S. Arctic waters and demonstrate the value that your Administration places on having a sound scientific basis for managing industrial development of the Outer Continental Shelf,” the letter says.

The letter featured in ads in the New York Times and Politico (PDF), calls for a precautionary, science-based approach to offshore planning that better assesses the consequences of energy development in a rapidly changing marine ecosystem.

The USGS report addressed four basic topics: climate change, oil spills, effects of noise on marine mammals, and cumulative impacts. The USGS found that, while there is a great deal of scientific information on many aspects of these topics, this growing body of knowledge “is not synthesized and is not integrated.” In other words, no one has yet put all the pieces together in order to understand how things really work in Arctic Ocean waters.

Adding to the uncertainties is the daunting challenge of predicting how a changing climate will alter the ecosystem.

“Instead of continuing to charge into the unknown, the Administration should follow the lead of the USGS in developing a thorough, comprehensive, science-based approach that determines when, where, how, and whether offshore drilling should take place,” said Henry Huntington, science director for the Pew Environment Group's U.S. Arctic Program and one of the 573 scientists to sign the letter. “Such a plan should identify areas of ecological and cultural significance to be avoided or otherwise protected. It should also require Arctic-specific oil spill response standards to be in place. And it should look hard at scenarios of development and their cumulative impacts to determine how much is too much for the Arctic to bear.”