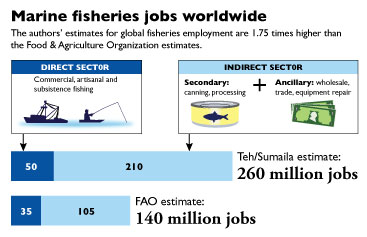 There are approximately 260 million marine fisheries jobs worldwide, according to a new article in the journal Fish and Fisheries. The comprehensive estimates of employment generated from fishing are 1.75 times greater than previous approximations by the U.N. Food and Agriculture Organization (FAO).

The authors found that of fifty million people employed in direct fishing—either in small-scale, artisanal operations or in the larger commercial sector—22 million are considered small scale, a 40 percent increase from previous estimates by the FAO. These new figures help to provide a better sense of the magnitude of small, unlicensed operations.

Fishery managers often estimate populations based on the amount of effort exerted to catch the fish. Yet uncertainty about employment in the small-scale fisheries sector can lead to underestimates of that effort. The findings from this article can help managers make more accurate estimates of the amount of fishing that takes place globally.

To reach their estimates, the authors compiled a database on fisheries employment in 144 coastal nations. The information was collected from technical reports published by institutions such as the FAO and the International Labour Organization. The researchers separated the countries by location and development status, and in areas with gaps in data, they used information about a country's population and region to approximate the number of fishermen.