Anglers like me are often impressed with size. We seek out the largest fish, revel in stories about the “big one” that got away, and proudly display photos of our most impressive catches. But it's a small, unassuming fish, the Atlantic menhaden, which forms the backbone of ecosystems and economies along the East Coast of the United States. Unfortunately, after decades of poorly regulated fishing, menhaden are in serious trouble.

The good news is that the Atlantic States Marine Fisheries Commission (ASMFC), which manages the fishery, is poised to take historic steps to restore this valuable species. When the ASMFC meets next week in Boston from November 7-10, it will consider the many ways menhaden are used: for commercial products such as omega 3 fatty acid pills and factory farm feed; as bait for commercial and recreational fishermen, who target larger fish; and, most importantly, as a pillar of the East Coast marine food web.

Menhaden were once abundant along the Atlantic seaboard, forming schools up to 40 miles long. These giant “pods” made up a central link in ocean ecosystems along the East Coast, providing a primary nutrition source for larger fish, seabirds, and marine mammals.

Americans rely on many of the predators that eat menhaden. We consume tuna, cod, and striped bass. Entire communities depend on income derived from recreational fishing, as well as wildlife and bird watching. There are plenty of ecological and financial reasons why this small animal is often called “the most important fish in the sea.”

By weight, more menhaden are caught than any other fish on the East Coast, and about three-quarters of this catch comes from the Chesapeake Bay and surrounding ocean waters. A single factory in Reedville, Va., takes in and grinds up this haul, reducing it to fish meal and oil destined for dietary supplements, fertilizer, farm animal feed, and pet food.

Because menhaden are mainly caught in state waters (less than three miles from the beach), they are managed by the ASMFC and are not governed by the requirements of the federal Magnuson-Stevens Fishery Conservation and Management Act, which I've described in earlier posts. There is no catch limit for Atlantic menhaden, only an unenforceable cap, with no accountability measures in place.

Commercial fishing should not jeopardize the health of marine ecosystems, recreational fishing opportunities, or public resources.

The ASMFC has defined safe fishing targets for menhaden, but surprisingly, no action plan is in place that requires fishing boats to meet them. Consequently, menhaden populations have plunged to less than 10 percent of historic levels, but there is still some confusion over whether the species is actually overfished. That's because the ASMFC's definitions of “overfishing” and “overfished” are different from those of the regional councils that manage fisheries in federal waters.

Here's the bottom line: Although the ASMFC has set safe fishing targets for menhaden, it has never required fishing to stop when those levels were reached. This benchmark has been exceeded every year since 1960; the fish hasn't caught a break since Eisenhower was president. 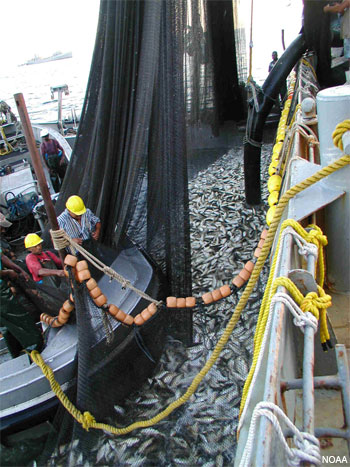 It is time for the ASMFC to step up and take responsibility, set sustainable and enforceable fishing limits, and allow menhaden to rebound. The disappearance of this critically important fish is affecting the entire ecosystem. Studies show declining amounts of this species in the diets of birds and other fish. Some of these animals are already showing signs of malnutrition, signaling a threat to the entire Atlantic marine food web. For example, you can't talk about striped bass anymore without noting the impact of menhaden's decline.

The Public Asked for More Fish in the Water

This fall, the ASMFC held 13 public hearings along the East Coast and listened to more than a hundred fishermen, scientists, local stakeholders, and those with commercial interests who provided presentations and testimony explaining why depleted menhaden stocks need to be rebuilt.

To answer this public outcry and save this small but important fish, the commission should embrace the strongest rebuilding goal on the table: a fourfold increase in the population. By doing so, the ASMFC would follow the best scientific advice for managing key prey species such as menhaden. Delaying decisions or maintaining the status quo—another option still on the table—is not scientifically or ecologically defensible.

Commercial fishing should not jeopardize the health of marine ecosystems, recreational fishing opportunities, or public resources. As with other fisheries, we need to focus on sustainability and provide everyone on the Atlantic coast with ample fish, both big and small.