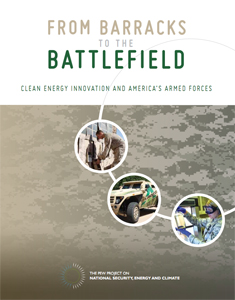 From Barracks to the Battlefield: Clean Energy Innovation and America's Armed Forces (PDF), a new Pew report, finds that Department of Defense (DoD) clean energy investments increased 200 percent between 2006 and 2009, from $400 million to $1.2 billion, and that they are projected to eclipse $10 billion annually by 2030. Using more than 300,000 barrels of oil a day in 2009, DoD is one of the largest institutional energy consumers in the world. As such, the military has set an ambitious overall target of obtaining 25 percent of its energy from renewable sources by 2025. This report documents how DoD is helping to accelerate the development and deployment of clean energy technologies in three key areas: vehicle efficiency, advanced biofuels and energy efficiency and renewable energy at bases.