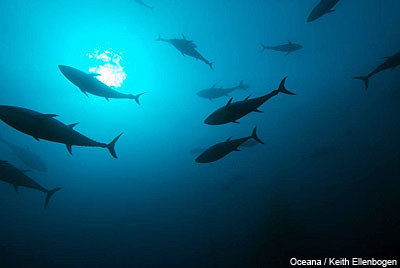 Atlantic bluefin tuna are one of the most popular fish in the world. Anglers fight for them, and love to tell tales of their epic battles. Scientists are enthralled by them, making this species one of the most studied in the ocean. And sushi lovers crave bluefin for the tastiness of their flesh served as sashimi.

But anything in such high commercial demand—be it fish, mammal or plant—can be threatened by the very traits that make it such a prize. Indeed, Atlantic bluefin have been over-exploited for years, with governments often dragging their feet when it comes to implementing measures that would help protect this valued species. As my friend, noted marine ecologist Carl Safina, recently said, “The right thing never happens for bluefin tuna.”

But despite many current problems related to bluefin tuna management, some existing technology can help protect this fish.

Let's start with the numbers. Catches of these tuna in the western Atlantic once reached 19,000 metric tonnes (20,943 U.S. tons) a year. This level of fishing could not be sustained, and the population crashed; we now take around 1,800 tonnes (1,984 U.S.) a year. In the Mediterranean, bluefin were caught by traditional methods for centuries. But the rise of industrial fishing and a lack of oversight by regulators allowed catches (illegal and legal) to grow to nearly 60,000 tonnes (66,139 U.S.) a year, jeopardizing the tuna—and the fishermen and coastal communities that depend on them.

After years of campaigning by environmental groups, the total catch of bluefin tuna in the Mediterranean has been significantly reduced, and other conservation measures have been put in place, such as banning the use of drift nets. But, there's a long way to go before we fully and properly manage this tuna species—and before it recovers.

Fraud and illegal fishing are two of the biggest problems threatening bluefin in the Mediterranean today. Tuna can travel halfway around the world and, once caught, change hands multiple times before being sold to consumers. This complicated supply chain opens up opportunities for undersized, undocumented or illegally caught fish to be mixed in with legal seafood sold on the open market.

In 2008, the countries that jointly manage bluefin, via a body called the International Commission for the Conservation of Atlantic Tunas (ICCAT), put in place a system to better track these valuable fish. The Bluefin Catch Document (BCD) system involves assigning a unique number to each haul of tuna, which, in theory, should accompany it throughout the supply chain.

But while this was a good start, this paper-based system still has flaws. Records are often incomplete or inaccurate; for instance a 2010 report found that 75 percent of industrial catches from 2008 and 2009 are missing data from their BCD, information that is critical when trying to count and track the amount of bluefin caught each year. The paper documentation system is also slow and cumbersome, opening up opportunities for fraud.

The good news is that we can address these issues by adopting a technology that already exists. Switching to an all-electronic system would improve the speed and accuracy of data collection and reporting.

Electronic catch documentation is already in place for the long-lived Patagonian toothfish (also known by its more restaurant-friendly name, Chilean sea bass), and physical barcodes are used in one swordfish and tuna fishery off the coast of Florida. Applying these modern tools to the Mediterranean bluefin fishery will not only better separate out illegal product, but will also help authorities distinguish boats that follow the law from those that jeopardize the entire system by operating illegally.

Transitioning to an electronic documentation system won't just assist enforcement officials and fishermen who follow the rules; it will also support scientists who study bluefin. Catch records provide a significant portion of the information that scientists use to determine how many tuna are alive and how many should be caught each year.

More accurate data means that we'll have better recommendations from scientists on what management measures are most appropriate to support both healthy bluefin populations and fishermen who depend on them. It makes economic sense, too. Given the worth of each tuna, it's only logical to invest in an electronic documentation system today that could help keep these awe-inspiring fish around for fishermen, conservationists, seafood lovers and scientists for generations to come.

In future articles, as ICCAT's November meeting approaches, I'll explore in more depth some of the other key challenges to protecting bluefin—including a closer look at how science can help in compliance and important conservation steps the commission can take at its fall meeting in Istanbul.