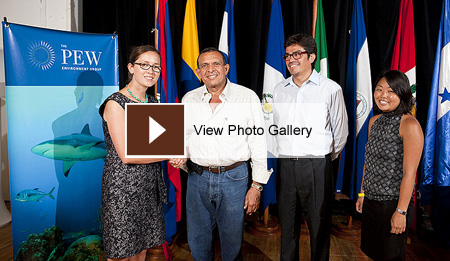 On Friday, June 24, 2011, Honduran President Porfirio Lobo Sosa announced a permanent shark sanctuary in his country's waters, building on its 2010 shark-fishing moratorium. The designation encompasses all 240,000 square kilometers (92,665 square miles) of the country's exclusive economic zone on its Pacific and Caribbean coasts and represents the first shark sanctuary in the Americas.

The announcement was made on the island of Roatan, a hot spot for shark tourism in Honduras. Pew's Global Shark Conservation campaign helped organize the bill signing event to illustrate how important and threatened sharks are today. In addition to a shark photo exhibit, presentations were made by:

After the presentations, the team headed to The Utila Center for Marine Ecology for a field trip to view shark tagging.

The team arranged for the tagging and release of two nurse sharks to give attendees a real-world positive experience with sharks. President Lobo Sosa, Vice President María Antonieta Guillén de Bogran, Minister of Tourism Nelly Jerez, Minister of Natural Resources and Environment Rigoberto Cuellar, Honduran Ambassador to the United Nations Lizzy Flores and Bay Islands Governor Shawn Hyde were on hand for the tagging and release. The event participants were able to see the sharks' release, witnessing it from glass-bottom boats. The event culminated in the signing ceremony and press conference, where President Lobo Sosa signed legislation that established the sanctuary.