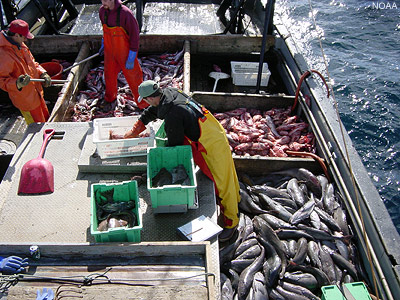 I touched on fisheries science in my last post, but here I would like to take a more detailed look at the use of research in setting policy and managing our marine resources.

Industry representatives frequently charge that federal fisheries managers use bad science to make decisions. Nothing could be farther from the truth.

Claim—The federal government sets annual catch limits on many species by guesswork because it doesn't have accurate population assessments or reliable information on overfishing for the majority of species it manages.

Limited data for popular species of reef fish in the Gulf of Mexico, for example, has been a known problem for decades. But deadlines in the Magnuson-Stevens Fishery Conservation and Management Act (MSA) to establish annual catch limits to end overfishing and rebuild depleted species finally focused attention on this issue. Now, progress is being made to gather more and better data.

However, some short-sighted interest groups are calling on Congress to weaken the law to exempt certain fish species from catch limits because of a lack of “full scientific information.” Ironically, if Congress removes the requirement to set catch limits for these so called “data poor species,” managers would likely shift their limited monitoring and research budgets away from these fish to other species where the legal requirement for catch limits still exists, further exacerbating data problems.

Claims that catch limits cannot be set for “data poor species” are simply false. Currently available information on basic biology, life history characteristics and catch numbers can be used to set quotas for every federally-managed fish, even those without complete assessments. For these populations, managers can base quotas on current catch levels until more complete scientific evidence indicates that the population can support additional fishing pressure. For example, in June of this year, science advisors in the South Atlantic recommended a quota for cobia, a popular sport fish that has not yet been fully assessed, at levels about 25 percent above median landings for the past 10 years. This sensible approach to setting catch limits is based on the stability of the stock, life history characteristics and other data; and gives anglers ample opportunity to target this fish without risking overfishing.

While fishery managers collect more information on individual species, they also could take advantage of a short-term solution by managing several data poor populations as a “complex” (grouping) with similar biological characteristics and vulnerabilities. Then managers can use one or more of the species in the complex that has been assessed as an “indicator species” for the entire group. That information could be combined with other science and catch reports to set annual catch limits for all the species in the affected complex. Fisheries managers then could use those various sources of biology and data to monitor and set annual catch limits for the whole group of species.

The claim that existing science is inadequate wrongly leads some to conclude that managers should allow unchecked fishing unless or until scientific information can show that limits are necessary. That approach has created disastrous consequences in many parts of the country. For example, managers unwittingly allowed overfishing of South Atlantic red snapper for 50 years, reducing the breeding population to 11-14 percent of what scientists consider a healthy level. Allowing fishing without any limits because of doubts about the data is like embarking on a shopping spree without knowing what is in your checking account.

The failure to conserve the fish populations that sustain the fishing economy is a losing long-term proposition. But implementing firm catch limits, based on science, that prevent overfishing will benefit anglers and conservationists alike for generations.

The bottom line: we have the legal and scientific tools in place to restore our ocean fish to healthy levels. We are seeing progress around the country. We now need to finish the job of ending overfishing and rebuilding our nation's valuable fish populations.

Next time I'll explore some success stories and policies that will move our fisheries forward in ways that are good for the environment and for communities.