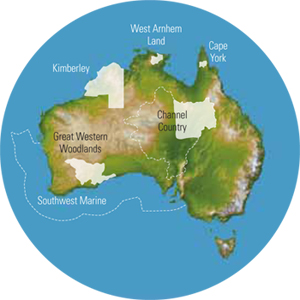 Every so often, Australia's Channel Country–deep in the Outback–sheds its title as one of the driest places on the planet.

Following periodic heavy rainful, the natural-flowing rivers that make up the region overfill with water and travel thousands of miles inland to the lowest part of the continent, Lake Eyre basin. What happens next is a marvel of nature.

The basin–covering one-sixth of the continent–collects water flowing from these rivers, particular the three largest—Cooper Creek, Diamantina and Georgina rivers. The water in turn awakens dormant wildlife and attracts water birds from across the country to breed and feed. This year's flood levels are unusually high.

Maintaining the natural river flows of the Cooper Creek, Diamantina and Georgina rivers is essential for ensuring that the Channel Country habitat, and the wildlife that depend on it, is protected for the long-term.

Due to the destruction and drying of wetlands in adjacent river systems, the Lake Eyre Basin wetlands are now critically important. Compared to similar river systems in arid areas of Africa and Asia, which are threatened by pollution and encroaching development that destroys whole ecosystems, the rivers of the Lake Eyre Basin are in a much better condition. However, poorly controlled irrigation and mining threaten its health. 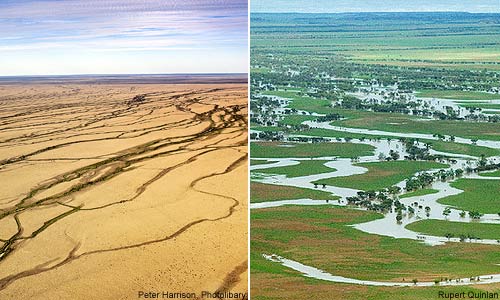 The Pew Environment Group's Wild Australia program is working to protect the natural water flows of the three rivers. The water that collects from these rivers (in areas known as catchments) is enormous, covering more than 135 million acres.

To protect this natural phenomenon, we are part of the Western Rivers Alliance, a partnership of conservation groups and local people. In December 2010, the first of the three rivers—Cooper Creek—and its surrounding catchment was officially proposed for protection under Australia's Queensland state government's Wild Rivers Act. Once in place, this protection will ensure the long-term protection of the three rivers and stop destructive irrigation and mining on 12.8 million acres of floodplains and wetlands.