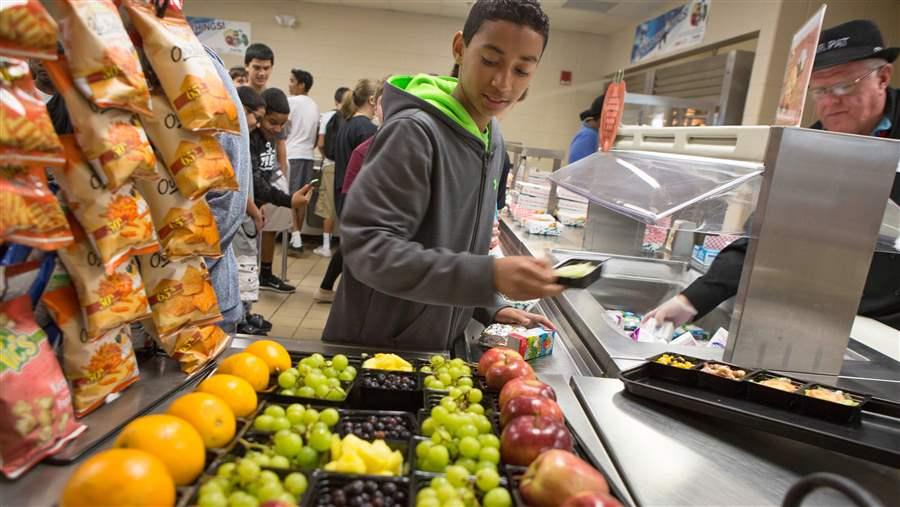 Students in lunch line are offered foods and drinks that meet strong nutrition standards. Studies have found that the location of fruits and vegetables in school lunch lines can significantly increase consumption of those healthier foods.

WASHINGTON—Almost half (48 percent) of Ohio voters with children in K-12 public schools think that students do not have enough time to eat lunch at school, according to a statewide survey released today by the Robert Wood Johnson Foundation and The Pew Charitable Trusts. Ninety-five percent of Ohio voters believe it is important to allow kids adequate time to eat, with more than 6 in 10 calling it “very important.”

Polling was conducted among a representative sample of registered voters in Ohio that included an oversampling of parents with children in public schools. Nearly all voters and public school parents—96 percent and 95 percent, respectively—think that serving nutritious foods in schools is important “to ensure that children are prepared to learn and do their best.”

“Giving kids enough time to eat can help ensure they get the nutrients and energy offered in today’s school meals,” said Jessica Donze Black, director of the Kids’ Safe and Healthful Foods Project, a collaboration of the Robert Wood Johnson Foundation and The Pew Charitable Trusts. “Schools are serving more fruits and vegetables under current nutrition standards, and research demonstrates that kids are taking and eating more of these healthy foods.”

The poll also shows that large majorities in Ohio favor the following standards in the national school food guidelines:

“We are thrilled to see widespread support for the changes schools have made to promote better nutrition,” said Krista Bistline, Ohio senior government relations director at the American Heart Association. “By offering students more nutritious foods and drinks, schools are setting children up for healthier lives.”

The Kids' Safe and Healthful Foods Project provides nonpartisan analysis and evidence-based recommendations on policies that affect the safety and healthfulness of school foods. The project is a collaboration between the Robert Wood Johnson Foundation and The Pew Charitable Trusts. Learn more at healthyschoolfoodsnow.org.