A new Arctic fisheries management plan announced by Environment Minister Leona Aglukkaq that will protect more than 800,000 square kilometres in Canada’s Beaufort Sea from large-scale commercial fishing and ensure a sustainable resource for local communities was praised today by The Pew Charitable Trusts.

The Beaufort Sea Integrated Fisheries Management Framework, which applies to an area of the western Arctic Ocean that is larger than Hudson Bay, requires that future commercial fisheries have the support of the Inuvialuit who live in the region, do not harm local harvests, and provide meaningful economic benefits to local communities.

“This is a major step toward protecting Arctic fisheries, and we commend Canada’s leadership on this issue,” said Louie Porta, policy director for Pew’s Oceans North Canada project, which commissioned research for the plan. “The Inuvialuit depend on a healthy ecosystem to support abundant populations of marine mammals and fish that for them represent food security and cultural continuity.” 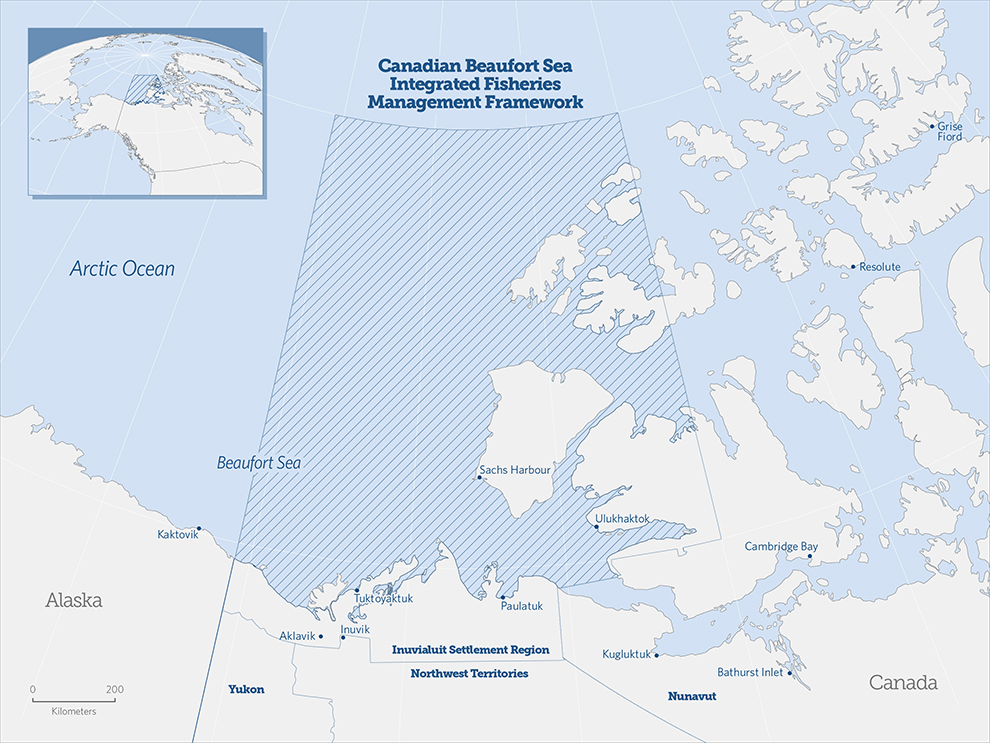 Canada’s Beaufort Sea, one of the last places on Earth that has not been overfished, supports one of the largest populations of beluga whales in the world. The Arctic is warming twice as fast as the rest of the planet, and melting sea ice and a northward movement of fish populations have increased the likelihood that commercial fishing will expand to this region. Such activities could harm vital habitats for marine mammals, fish, and birds and deplete natural resources that local communities rely on for their survival.

Under the plan, any decisions about large offshore commercial fishing operations will require additional scientific investigation. Since 2002, there have been eight applications for exploratory fishing licenses in the Canadian Beaufort.

The United States signed a precautionary fisheries management plan in 2009 that prohibited commercial fishing in more than 500,000 square kilometres of its waters north of Alaska until scientific research and management measures can ensure a sustainable catch.

A similar effort is under way by the five Arctic countries—Canada, the United States, Russia, Greenland, and Norway—that border the international waters of the Central Arctic Ocean. In February, those countries agreed to work on an international fisheries accord that would protect almost 3 million square kilometres from commercial fishing. The agreement would prevent industrial fishing while experts assess the impact of melting ice on the ecosystem and determine what oversight is needed.

Oceans North Canada is a project led by The Pew Charitable Trusts in partnership with Ducks Unlimited Canada. Pew is driven by the power of knowledge to solve today's most challenging problems. Pew applies a rigorous, analytical approach to improve public policy, inform the public, and stimulate civic life.