Located near the intersection of the marine coastline, the warm semiarid desert of Southern California, and the cooler, wetter central regions of the state, California's central coast hosts two of the richest ecosystems in the world: the Los Padres National Forest and the adjoining Carrizo Plain National Monument. Visitors from around the world come to these coastal mountains and grasslands to hike, backpack, camp, bird-watch, ride horses, hunt, fish, kayak, and mountain bike. 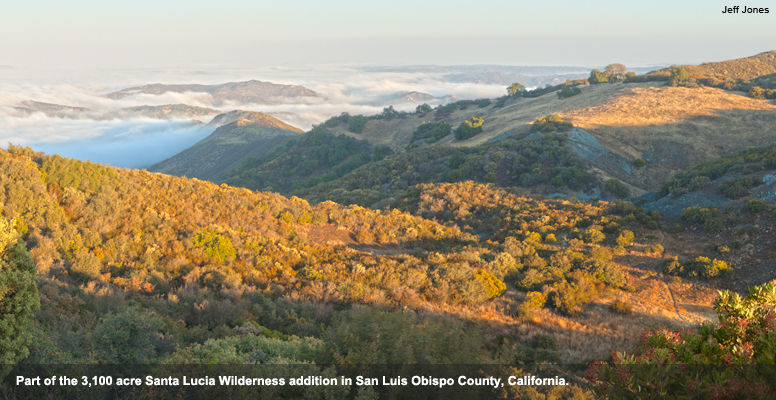 The unique blend of northern and southern climates in the Los Padres National Forest provides habitat for more than 450 species of wildlife and 1,200 plant species. More than 90 of these species are at risk of extinction, including the San Joaquin kit fox, steelhead trout, arroyo toad, California jewelflower, spotted owl, and California condor.

Today, The Pew Charitable Trusts, as part of Central Coast Wild Heritage's campaign, is working to expand wilderness and wild and scenic river protections within the forest and to include additional protection for parts of the Carrizo Plain.

With a wingspan of up to 9.5 feet, the California condor is the largest bird in North America. Despite efforts to establish sanctuaries, the population of this bird declined perilously in the 1980s, with only 27 left in the world by 1987. Although still seriously endangered, rigorous conservation efforts have increased the population to about 232 condors in the wild and about 182 in captivity.1 The Sisquoc Condor Sanctuary in the San Rafael Wilderness and the Sespe Condor Sanctuary in Ventura County provide the birds with the inaccessible, high rocky cliffs they need to roost, nest, and hunt.

Public access to the sanctuaries is restricted, but condors can be viewed at a number of places, including the observation site at the summit of nearby Mount Pinos. A short hike leads to this lookout, from which condors are visible from June to October. to the Mount Pinos Condor Observation Site.)

Condors also frequent the nearby Carrizo Plain. This habitat has the largest concentration of endangered species in California, including the blunt-nosed leopard lizard, the San Joaquin antelope squirrel, and the giant kangaroo rat. Rare plant species include the California jewel-flower, Hoover's woolly-star, and San Joaquin woolly-threads. Birders come to the plain to view the sandhill cranes and long-billed curlews that inhabit the alkali wetlands of Soda Lake.

Hunters are drawn to the Temblor and Caliente mountain ranges on the Carrizo Plain for upland game, especially California quail and chukar. The area provides the largest contiguous habitat for pronghorn antelope and tule elk, which were reintroduced after being overhunted in the 1800s. Today, elk hunting is managed through an annual lottery, but the hunting of pronghorns has been suspended because of a decrease in their population.

Los Padres' distinctive environment, diverse wildlife habitat, and outstanding recreational opportunities face increasing pressure from development. Oil drilling occurs on 15,000 acres of the forest near some of its most sensitive areas, such as Sespe Condor Sanctuary, and active proposals for more commercial development are under consideration. Other threats to water, wildlife, and wild lands include livestock overgrazing, off-road-vehicle use, and mining.

Californians from across the state have joined with local residents to work for the protection of the Los Padres National Forest and the Carrizo Plain—and their recreational opportunities, clean water, and habitat for hundreds of plant and wildlife species—for the benefit and enjoyment of future generations.