Just before midnight March 24, 1989, the oil tanker Exxon Valdez struck Bligh Reef in Alaska, causing the largest oil spill in U.S. history to that point. In the weeks that followed, a shocked world watched as the tanker spewed approximately 11 million gallons of oil into the formerly pristine and delicate Prince William Sound.

Marilyn Heiman, then working for the Alaska Legislature and now director of Pew's U.S. Arctic program, remembers that she began developing legislation to prevent a spill of that magnitude from ever happening again. She recalls waiting days for containment vessels to arrive and watching helplessly as the oil spread to beaches and killed hundreds of thousands of fish, birds, and other wildlife.

“The Exxon Valdez spill was truly devastating to the environment, the fishing industry, and the communities,” she says. “Prince William Sound is God's country, so full of life and so rich. What was happening was heart-wrenching.” 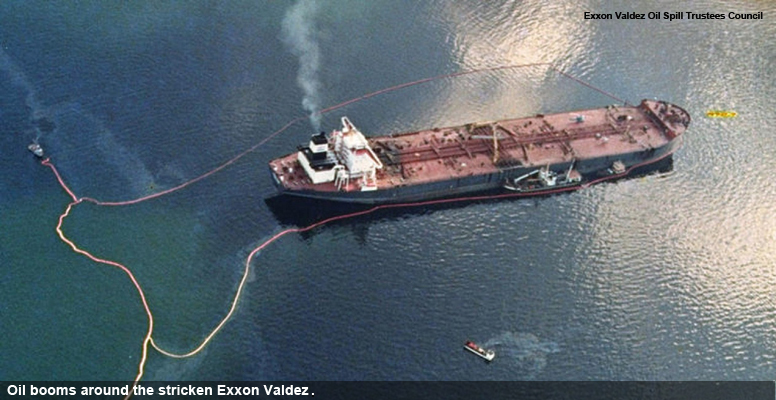 The effects of the Exxon Valdez spill on the more than 1,300 miles of shoreline in the northernmost part of the Gulf of Alaska were horrendous. It:

In the months and years after this disaster, Congress, the George H.W. Bush administration, and the state of Alaska jumped into action. In August 1990, Congress passed the Oil Pollution Act, which, in combination with Alaska state laws passed after the spill, improved the nation's ability to prevent and respond to oil spills. This landmark legislation required many improvements in how the United States ships oil, such as requiring double-hull tankers, the best spill-response capability in the world, regional citizens' advisory councils, increased liability, and a “vessel of opportunity” program that trains and pays fishermen to respond to a spill in Prince William Sound.

In addition to these reforms, an executive order by the governor of Alaska required that two vessels escort every loaded tanker from Valdez out through Prince William Sound to Hinchinbrook Entrance. As the process evolved during the 1990s, the tugboats were replaced with a 210-foot escort response vessel and high-powered tractor tugs.

Today two major challenges facing the Arctic must be addressed.

Increased vessel traffic
Melting sea ice in the Bering Strait is opening a new passageway for ship traffic, a trend that is expected to accelerate. Although shipping activity is light compared with other regions of the world, the capacity to provide aid and support for vessels in the strait is extremely limited, and responding to an oil spill in these remote and seasonally challenging waters is nearly impossible. Given the cultural, ecological, and economic importance of the region, the likely consequences of an accident are considerable.

The increasing activity makes this a critical moment for the United States to develop appropriate standards of care for vessel traffic in the Arctic. There are no regulations for vessel traffic in these waters, and setting “rules of the road” will ensure safer transport. Local communities should play a leadership role with other stakeholders in this effort.

Standards of care may include:

Increased energy exploration
Today there is an increased push to drill offshore into ever deeper and riskier frontier waters of the Arctic. Those waters are ice-covered for eight to nine months of the year and in almost complete darkness for nearly three of those months. Even during the summer, when the ice pack has mostly receded, the Arctic experiences high seas, wind, freezing temperatures, dense fog, and floating ice hazards. Even more challenging, the major highways, airports, and ports that most Americans take for granted do not exist in the Arctic. The nearest Coast Guard base is more than 950 air miles away, and the closest major port is over 1,000 miles away. 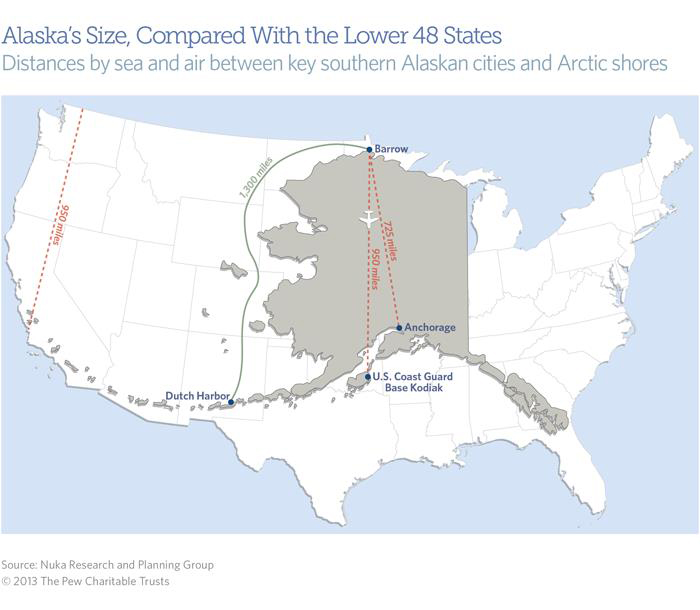 Technology for extraction has far outstripped the quality of oil spill prevention and response capabilities. As we saw with the 2010 BP Deepwater Horizon spill, the response technology of skimmers, booms, dispersants, and burning has improved little in the 25 years since the Exxon Valdez disaster.

To protect the unique Arctic environment, the United States should adopt specific Artic standards to guide energy exploration, including:

Pew is not opposed to offshore drilling, but a balance must be achieved between responsible energy development and protection of the environment. It is essential that appropriate standards be in place for safety and for oil spill prevention and response in the Arctic.

“There should be world-leading standards for any company operating in the remote, extreme, and vulnerable Arctic Ocean. This will provide regulatory certainty for the industry and ensure protection of the marine ecosystem,” Heiman says. “It will also reduce the chance of another catastrophic event like the Valdez spill.”