A new analysis by the Australian Institute of Marine Science and the University of Western Australia concluded that in 2010, shark-related diving contributed $42.2 million ($73 million Fijian) to the economy of Fiji. Shark-diving operations generated $4 million that year for Fijian communities through salaries and local levies. “This study clearly shows the role sharks and tourism play in the economy of Fiji,” said Jill Hepp, manager of global shark conservation at the Pew Environment Group. “Fiji has a significant financial incentive to declare a shark sanctuary and solidify its reputation as one of the top diving destinations in the world.”

The study, “The Socio-Economic Value of the Shark-Diving Industry in Fiji,” found that overall tourism activities in 2010 generated $558 million, approximately 18 percent of the country's gross domestic product (GDP), and that one in 10 tourists engaged in diving activities. In particular, diving with sharks has become more popular over the past several years; one dive operator in Pacific Harbour, on the island of Viti Levu, reported the number of divers at his business alone increased more than 300 percent, from 700 in 2004 to 3,000 in 2010.

Shark diving is popular throughout Fiji, not just in Pacific Harbor. In Viti Levu, the country's largest island, profits totaled approximately $10.2 million; and to the northwest, the island groups of Mamanuca and Yasawa generated $3.2 million. 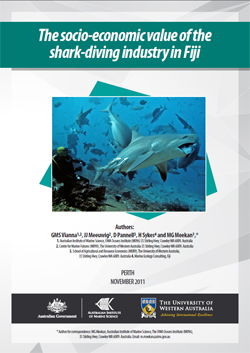 “Our survey found that sharks are one of the most significant creatures tourists wish to see when scuba diving,” said Dr. Mark Meekan of the Australian Institute of Marine Science and co-author of the study. “These animals are also an indicator of healthy coral reef ecosystems.”

Diving with sharks is a growing business worldwide, with established operations found in at least 83 locations in 29 countries. Although places such as South Africa, the United States, and Australia have typically dominated this industry, shark diving is becoming an economic driver across the Indo-Pacific. In Palau, a recent study found that $18 million a year (or 8 percent of its GDP) is generated by this activity. In French Polynesia, diving with lemon sharks off Moorea Island brings in about $5.4 million annually.

"This study quantifies what we already knew but could only guess up until now,” said Michael Wong, chief executive officer of the Fiji Hotel and Tourism Association. “Living sharks add real value to our economy, so it makes sense to do everything we can to protect Fiji's sharks. A Fiji shark sanctuary is the strongest means possible."

“Protecting sharks is a win-win opportunity,” said Rick MacPherson, Director of Conservation Programs for the Coral Reef Alliance. “Living sharks provide a direct—and renewable—economic benefit for the people of Fiji. They also contribute to a healthy marine environment, which is paramount to Fiji's long-term social, cultural, and financial well-being.”

At least 75 shark and ray species inhabit the waters of the Fiji islands. According to the International Union for Conservation of Nature Red List of threatened species, 66 percent of these species are globally threatened or near threatened. Although Fiji has implemented strong measures to safeguard the marine environment, there are no specific protections for sharks.

Up to 73 million of these animals are killed every year primarily for their fins, which are used to make shark fin soup, a popular dish in Asia. Over the last two years, several countries—including Palau, the Maldives, Honduras, the Bahamas, and the Marshall Islands—have created sanctuaries and prohibited commercial shark fishing to protect these species in their waters.