Declared Wild Rivers under the government's Wild Rivers Act, this designation will create confidence for graziers over water supplies and deliver long-term benefits for the region's natural environment, such as filling Lake Eyre.

Ten million acres in western Queensland will be protected as a result of this designation, along with the prohibition of coal seam gas development in the region's rivers and floodplains, the creation of ten new Indigenous conservation ranger jobs, and the delivery of a support package for local government and catchment groups to control weeds and feral animals.

“Protection of these rivers is ground-breaking and a great reassurance to graziers,” said Angus Emmott with the Australian Floodplain Association, and a third generation grazier from Noonbah Station in western Queensland.

“These systems are dry desert rivers, but when they flood, some of the best beef country anywhere in Australia is created. Living and working out here, our greatest fear is from mining. Protection under the Wild Rivers Act means new mining and coal seam gas is now prohibited from our waterways and vast floodplains,” said Mr Emmott. 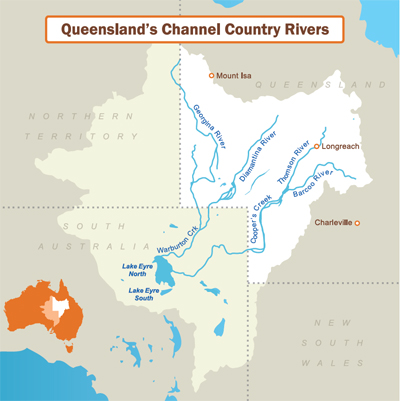 Cooper's Creek, Georgina, and Diamantina rivers are great Australian icons–immortalized by Bush poet Banjo Patterson, and the site of the tragic deaths of explorers Burke and Wills. They form one of the last near-natural desert river systems left in the world.

The area transforms during wet times from an arid environment to one bursting with fish, birds, wildflowers, and lush green grasses, as masses of water travel hundreds of kilometers from the western slopes of the Great Dividing Range in North Queensland to South Australia's Lake Eyre.

“In the 1990s, we as a community had to fight tremendously hard to keep cotton irrigators from killing Cooper's Creek. The main threat now is from mining and coal seam gas. Having our river protected under the Wild Rivers Act sends a signal to the mining industry to keep away from our rivers and floodplains, so we can manage them for future generations,” said Bob Morrish, chairman of the Cooper's Creek Protection Group.

The declaration follows almost three years of extensive, local negotiations, the majority of it driven and shaped by the leadership within western Queensland's local governments.

“What we have experienced with Cooper's Creek, Georgina, and Diamantina rivers in western Queensland is some of the most successful consensus-driven community policy development Australia has seen. Traditional Owners, catchment and natural resource management groups, mayors, and conservation and producer organisations came together in a spirit of cooperation.

The result has fulfilled the promise of the Wild Rivers Act and provided the protection needed for these globally significant rivers in the Channel Country,” said Barry Traill, director of the Pew Environment Group's Australia program.

“The Bligh Government has shown strong environmental leadership here, putting the long-term protection of this important river system ahead of short-term mining and irrigation interests. It is critical that LNP leader Campbell Newman now unreservedly supports this move, so we have genuine bipartisan commitment to the protection of this wonderful natural icon,” said Glenn Walker, Wild Rivers campaigner for The Wilderness Society.

To learn more about these Wild Rivers protections, read the Queensland Government's statement.