The Republic of the Marshall Islands is now home to the world's largest shark sanctuary. The Nitijela, the Marshallese parliament, unanimously passed legislation this week that ends commercial fishing of sharks in all 1,990,530 square kilometers (768,547 square miles) of the central Pacific country's waters, an ocean area four times the landmass of California.

“We salute the Republic of the Marshall Islands for enacting the strongest legislation to protect sharks that we have seen,” said Matt Rand, director of global shark conservation for the Pew Environment Group, which is spearheading efforts to establish shark sanctuaries, where targeted fishing for these species is prohibited. “As leaders recognize the importance of healthy shark populations to our oceans, the momentum for protecting these animals continues to spread across the globe.” 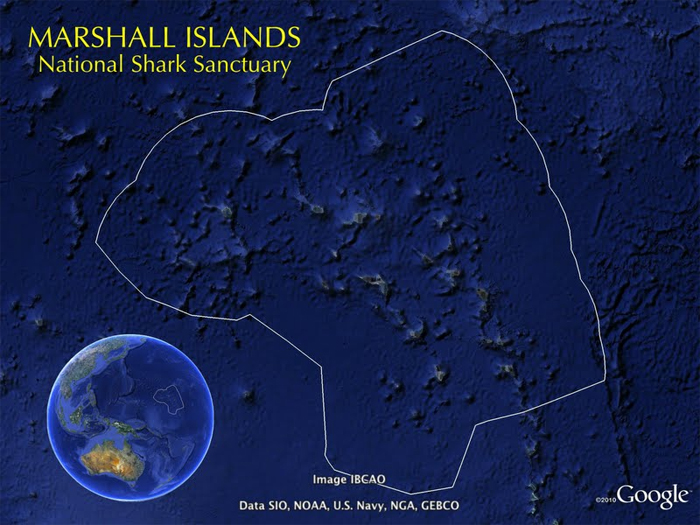 Key provisions of the comprehensive Marshall Islands' law include:

This week's action was initiated in March of this year when the Marshall Islands Marine Resources Authority issued a moratorium on the shark trade. It was furthered in June, when President Jurelang Zedkaia joined other central Pacific leaders in setting the stage for the creation of a Micronesia Regional Shark Sanctuary, the first regional shark conservation agreement of its kind. In July, the Marshall Islands Mayors Association moved to make this vision a reality by passing a resolution that called on the 24 inhabited atolls throughout the Marshalls, each with its own local government, to enact ordinances prohibiting the sale and trade of sharks or shark fins.

“In passing this bill, there is no greater statement we can make about the importance of sharks to our culture, environment and economy,” said Senator Tony deBrum, a representative from Kwajalein Atoll who is a bill cosponsor. “I thank President Jurelang Zedkaia for his vision and support for this effort. Ours may be a small island nation, but our waters are now the biggest place where sharks are protected. We hope other Micronesian leaders will join with us to make good on our collective promise of a regional sanctuary.”

“The Marshall Islands have joined Palau, the Maldives, Honduras, the Bahamas and Tokelau in delivering the gold standard of protection for ensuring shark survival,” Rand said. “We look forward to helping other countries enlist in this cause.”