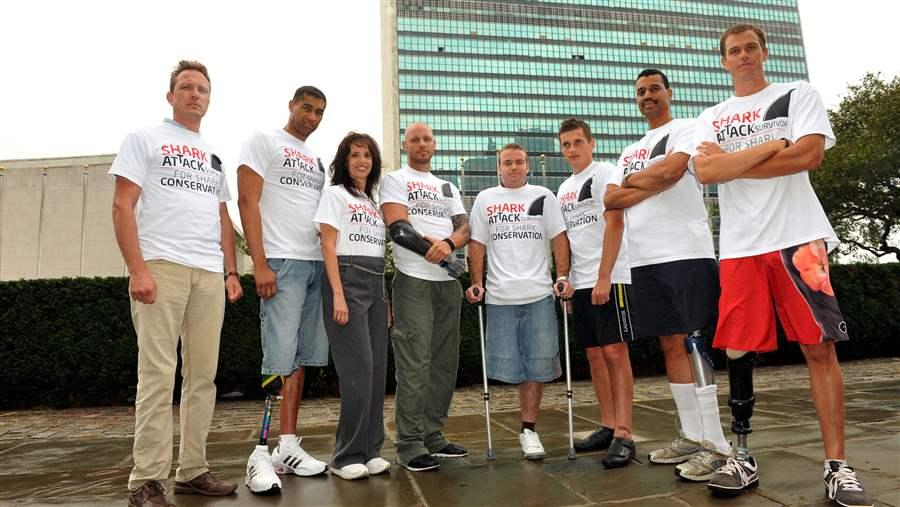 Shark attack survivors visit the United Nations in 2010 to ask countries to end fishing of vulnerable species and create sanctuaries where commercial shark fishing is banned.

I once planned to eat shark steak every August on the anniversary of being attacked by a shark off Florida’s east coast. This year, the 10th anniversary, might even have called for a special party with steaks for all my guests.

A lot has changed in a decade, however—for me and for sharks.

I never ate the first steak because my quest for revenge was short-lived. By the first anniversary, my severed Achilles tendon was healing and I was walking. I had searched for a reason why I was attacked. What I found was a renewed purpose, using my unique status and perspective as a survivor to pursue what had always been dear to me: ocean conservation.

I left a newspaper job in which I had focused on environmental stories and earned a master’s degree in environmental sciences and policy at Johns Hopkins University. I went to work for The Pew Charitable Trusts, where I recruited other attack survivors from around the world to help save sharks. We set about pushing for conservation measures in Congress and at the United Nations.

And in many ways today, sharks are better off.

For one, many more people are realizing that sharks have more to fear from humans than we do from them. Since my attack, scientists have quantified the tremendous loss: approximately 100 million sharks killed each year, mostly for their fins, which primarily are sold for the Asian delicacy shark fin soup. With such carnage, it’s not surprising that more than half of all shark species are headed for extinction.

These statistics have helped prompt officials in China and Hong Kong to ban shark fin soup from official banquets. Some hotels have stopped serving it, and certain airlines are no longer transporting the fins. Organizations have formed to educate consumers and potentially reduce demand. Around the globe there are more shark conservation groups, movies and television shows about the plight of sharks than ever.

...sharks have more to fear from humans...Debbie Salamone

Finning—slicing off a shark’s fins and dumping the animal overboard to drown or bleed to death—has been reduced in many areas of the world. The public has turned against finning, a practice that allows fishermen to fit more of the valuable fins on their boats, and many countries and regions, from the U.S. to Europe, have required that sharks be brought to port with fins attached.

Of course, we have a long way to go. The sheer number of sharks taken from the ocean is threatening the health of marine ecosystems; because sharks are slow-growing, late to mature, and bear few young, they cannot quickly replenish their populations and fulfill their vital role at the top of food webs. And while finning has been reduced, some fishermen are now skirting the requirement that sharks be brought to port with fins attached by “spining”: They leave fins attached to the spine but strip off all the meat and dump it overboard, still making room on board for more sharks.

Meanwhile in the United States, which took a leadership role in banning finning, 11 forward-thinking states and territories, including New York, Illinois, California, and Guam, have gone even further and banned the sale and trade of shark products. Yet these states and territories are fighting to keep their regulations, because the federal government says they interfere with U.S. fishing laws. That stance is a step backward for shark conservation.

Saving sharks is a battle that will last for many years. This Aug. 29, as I remember those bloody and terrifying moments on the beach, I will not look back with horror and sadness, but rather look forward with a sense of hope. As we continue to achieve better protections for sharks, those will be anniversaries worth celebrating.

This commentary was also published by Discovery News.