To provide the greatest ecological benefits to ocean ecosystems and the communities that rely on them, marine protected areas (MPAs) must include strict safeguards, according to a report that the International Union for Conservation of Nature’s French committee presented at the World Conservation Congress in Marseille last month.

The report also shows that partially protected areas are effective only when combined with highly protected ones. Experts from the IUCN Commission on Protected Areas as well as the organization’s overseas territories and coastal and marine working groups contributed to the report, which focused on the need to highly protect French waters,examined existing international standards, and outlined the IUCN’s recommendations. The Pew Bertarelli Ocean Legacy Project provided financial and technical assistance to the report as part of a two-year partnership with the French committee.

IUCN Resolution 50, which was adopted at the 2016 World Conservation Congress, recommends that to create a truly sustainable ocean, 30% of each marine habitat must be highly protected, with a complete ban on extractive activity.

As cited in the report, the European Court of Auditors has shown that the majority of Europe’s MPAs offer relatively weak protections. Indeed, the court notes that in 59% of European MPAs, trawl fishing is carried out at higher levels than outside the MPA. And so-called “paper parks”—areas whose protections effectively exist on paper alone—offer a false sense of security against the very real threats to the European marine environment, including fisheries.

At a global level, the figures are not much better; to date, only 2.7% of the global ocean is fully or highly protected. But some countries have successfully set ambitious marine protection policies: According to the Marine Protection Atlas, the U.K. has placed 27% of its waters under a strong protection regime; the U.S., 23%; Chile, 12%; and Palau, 78%.

One challenge is that definitions of “highly protected” vary throughout the world. For example, France’s definition, which takes a qualitative approach, is open to interpretation. To avoid confusion, IUCN experts recommend tying the French definition to international standards, such as the IUCN’s MPA categories 1-4 or the “fully protected” and “highly protected” designations used in Protected Planet’s MPA Guide.

The report also highlights a few key international standards for marine protection. For example, the IUCN notes that all industrial activities, including industrial fishing and mining, are incompatible with MPAs and should be banned in these areas. And according to IUCN Resolution 55, the term “industrial fishing” applies to all fishing activities carried out by vessels more than 12 meters (39 feet) long with a catch capacity of over 50 kilograms (110 pounds) per trip. Experts also recommend aligning national goals for MPAs with those of the European Union by committing to “strictly” protect 10% of marine areas by 2030, meaning that no extractive activities are allowed there.

The French government laid out an ambitious goal to protect 30% of ecosystems on land and at sea, with a third of that being highly protected by 2022. The report points out that France has already reached the 30% goal, as its MPA network currently covers 33.17% of its maritime area, or 3.4 million square kilometers (1.3 million square miles). However, the report notes that France’s MPAs are concentrated primarily in just two territories—the French Southern and Antarctic Lands, and New Caledonia—and that just 1.6% of French waters are highly protected, much less than the 10% that France has committed to strongly safeguarding by 2022.

In the report, IUCN experts recommend that France highly protect 10% of marine ecosystems along each of its coastlines, in each overseas basin, and in each Pacific territory so that the country’s network of highly protected areas will be ecologically representative and provide the greatest socioeconomic benefits. They also recommend conducting an annual review of the process of designating and implementing highly protected areas—as well as increasing staffing and funding for the management and monitoring of these areas—to better align with the goals that France outlined in its national strategy, for the good of the country’s, and the world’s, ocean health.

Jérôme Petit is based in France and leads the Pew Bertarelli Ocean Legacy Project’s work in French waters. 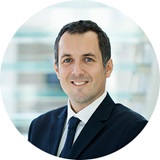