This infographic displays a breakdown of each state’s revenue by major categories. 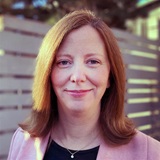