And the city, by many measures, is on the upswing, even as we continue to face complex challenges, such as a persistent poverty rate and a high number of drug deaths. According to The Pew Charitable Trusts’ most recent “State of the City” report, the population is growing, fueled primarily by Millennials and immigrants; home sales and the annual number of residential permits continue to rise; and job creation is now on pace with the national average after lagging for many years.

Others outside of our community continue to take notice. Last month, according to Visit Philadelphia, hotels in Center City marked 10 straight years of occupancy growth—a remarkable trend line consistent with data from the State of the City report. Visitors want to come here to spend time at our world-renowned arts and cultural institutions, and relish the outsized role Philadelphia played in the birth of our country, among other activities. This marked increase in tourism is good news in itself, made even better by its economic benefits for the city and the region.

In order to continue to nurture the city as a dynamic place for residents and visitors alike, Pew makes strategic investments to enhance Philadelphia’s vibrant arts and cultural sector and leverage the city’s civic treasures, including many of its renowned attractions and public spaces.

Together with other public and private partners, Pew has a history of in investing in many of Philadelphia’s institutions and iconic landscapes, from the Barnes Foundation, Free Library of Philadelphia, and Sister Cities Park—all located on the city’s grand boulevard, the Ben Franklin Parkway—to the Liberty Bell Pavilion, the National Constitution Center, and the Independence Visitor Center, all on Independence Mall.

The first is the forthcoming Park at Penn’s Landing. This transformational effort—a partnership between the Delaware River Waterfront Corporation, the state, the city, the William Penn Foundation, the Knight Foundation, Pew, and others—will create a long-awaited connection between Center City and the Delaware River waterfront, with a 4-acre overpass above I-95 and Columbus Boulevard. The public park will include amenities such as an ice skating rink, children’s play areas, a café, and performance space for the local community and tourists to enjoy. Scheduled to begin construction next year and open in 2024, the park has the potential to significantly enrich the civic, cultural, and economic vitality of the waterfront.

The second venture between the state, city, and philanthropy is being spearheaded by the Calder Foundation and Joe Neubauer and the Neubauer Family Foundation. It’s the newly announced gallery space and gardens dedicated to the art of Alexander Calder, one of the most innovative artists of the 20th century—and one whose family’s story is an important part of Philadelphia’s art history. The facility will present a rotating selection of master works from the Calder Foundation, including mobiles, stabiles, monumental sculptures, and paintings. The new facility will not be like a traditional museum; instead, visitors will engage with the work in the way the artist intended, by encountering the pieces as a personal experience. Construction is set to begin in 2021; once completed, the sanctuary will even further advance the city’s reputation as a world-class arts destination.

These two projects add to the reasons why Philadelphia is blossoming. The city still faces significant challenges, such as poverty, which Pew works to address by supporting area nonprofits that provide vital services to individuals and families in need. But we are also blessed with a unique history, culture, and location. Continuing to build on this rich foundation will help Philadelphia further prosper as the dynamic destination that we’re all proud to call our hometown.

Frazierita Klasen is vice president at The Pew Charitable Trusts, leading the organization’s work in Philadelphia. 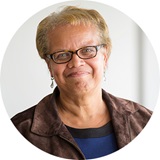