Holly Fearnbach of SR3 SeaLife Response, Rehabilitation, and Research, along with colleagues from the National Oceanic and Atmospheric Administration’s Southwest Fisheries Science Center and the Center for Whale Research, recently completed an assessment of the movements and population status of Type A killer whales around the Western Antarctic Peninsula. Three forms of killer whales are found around the Antarctic Peninsula, Types A, B1, and B2, each with differences in morphology, genetics, acoustics and preferences in prey.

Type A, the largest form, prefers open-water habitats and has been observed feeding primarily on elephant seals and minke whales around the peninsula. Previous research in Antarctica has focused on the ice-dependent Type B killer whales; this study helps fill a key data gap on the population status of Type A killer whales.

Numerous shifts in the environment, including warming ocean waters, related ice loss, and changes in prey abundance, are making it increasingly important to accumulate benchmark data on top predators such as killer whales. This research provides key information for monitoring changes in their population status and distribution over time. It will also help experts evaluate the overall health of the Western Antarctic Peninsula ecosystem because as top predators, killer whales tend to do well when ecosystems are healthy.

The researchers integrated satellite telemetry and photo-identification data collected during the austral summers from 2004-2005 to 2016-2017 to describe the cetaceans’ movement patterns and estimate their abundance.

The study authors placed 10 telemetry tags on whales and studied approximately 12,500 photos, which were collected from a variety of sources, including tourism expedition ships and research vessels. Images were used to identify as many individual whales as possible based on their long-lasting, natural markings.

Researchers identified 191 Type A killer whales from photographs. Average annual abundances in the region increased from 84 whales in 2009-2010 to 137 in 2016-2017. The tagged whales typically occurred around the peninsula in the austral summer, but also moved over long distances, including to areas off both the eastern and western coasts of South America. The waters where the study occurred are an important foraging area for Type A killer whales due to an increased availability of prey species such as elephant seals and minke whales. Increases in Type A killer whale abundance over time may be due to changing ice conditions that altered access to feeding areas or to changing local abundances of these prey species. Additional research is needed to fully evaluate the drivers of these changes.

Why the findings are important

“Studying the health and status of whale populations allows us to understand the health of the ecosystem that supports them,” says Fearnbach. “The Antarctic Peninsula is one of the most rapidly warming regions on the planet and we need to understand the impact of these changes on this important marine ecosystem to manage human activities sustainably and help conserve this pristine environment.”

The marine environment off the peninsula is changing rapidly, resulting in shifts in the abundance of several key species such as gentoo and Adélie penguins and Antarctic krill. Killer whales are important apex predators in Antarctica and their large size and high caloric requirements make them vulnerable to changes in food availability. Unfortunately, there is limited data on the abundances and trends of killer whales, particularly Type A whales. There is even less data on the health of individual whales—a topic Fearnbach and her colleagues are researching.

Data on top-predator abundance help experts assess both their effect on the food web and their responses to changes in prey availability. Future studies will look at the health of individual whales and trends for Type B killer whales and assess the body condition of both types. This information is important for fishery managers, especially as ocean conditions change.

This new research provides a decade-long dataset that can serve as a baseline against which the effects of climate change can be measured. These data should help the Commission for the Conservation of Antarctic Marine Living Resources (CCAMLR), the body charged with conserving biodiversity in Antarctica’s Southern Ocean, evaluate management proposals and measure the effects of decisions taken around the Antarctic peninsula.

Editor's note: On July 29, the title of the piece was updated for clarity. 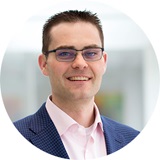