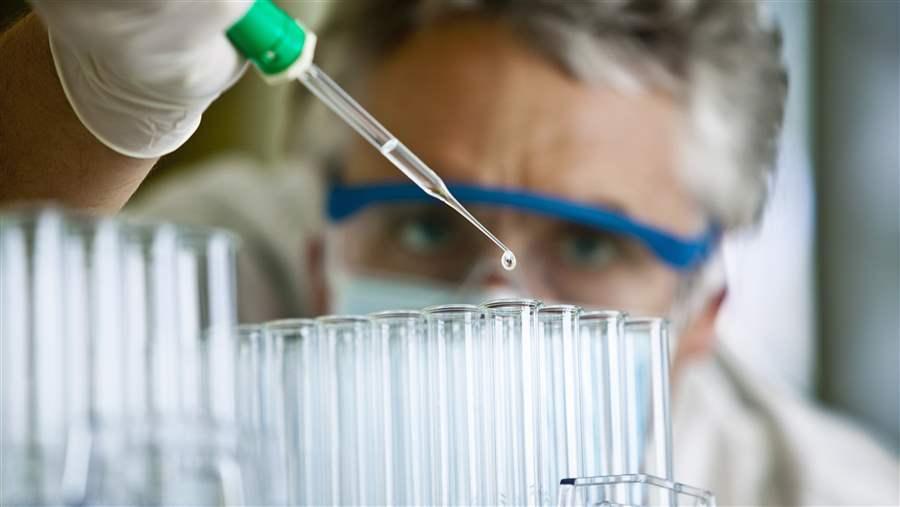 Revitalizing the drug pipeline will take a concerted effort to overcome some key scientific barriers that have impeded attempts to discover new types of antibiotics.

As news headlines repeatedly remind us, humanity is falling behind in its long battle with bacterial diseases. The more we use antibiotics, the less effective they become, and we are quickly running out of drugs that can treat increasingly resistant infections. Sooner or later, bacteria will evolve to resist every antibiotic we have.

The recent discovery of two genes—known as mcr-1 and mcr-2—are a stark reminder that this future may not be far off. These genes can make bacteria resistant to colistin, one of the few medications that doctors can still turn to in fighting serious and life-threatening infections that are resistant to other treatment options, and they can be passed easily among bacteria. As a result, experts believe that it is just a matter of time until these genes spread to already-hard-to-treat bacteria and create a new variety of superbug that will resist every antibiotic on the pharmacy shelf.

In June, 2016, The Pew Charitable Trusts, Wellcome, and the American Society for Microbiology brought together a group of leading experts to explore ways to spur the innovation of urgently needed antibiotics. The meeting yielded clear consensus: our dwindling antibiotic development pipeline is insufficient to meet current and future public health needs. There was also widespread agreement among the expert participants regarding the specific, scientific research gaps at the root of the problem, and on the steps that must be taken to address them.

The root of the problem: scientific challenges

Revitalizing the drug pipeline will take a concerted effort to overcome some key scientific barriers that have impeded attempts to discover new types of antibiotics.

One of those barriers is a major gap in the understanding of how to defeat some of the toughest and most complex pathogens out there: drug-resistant Gram-negative bacteria. Many of the most serious and deadly bacterial infections are caused by Gram-negative pathogens, and efforts to find new antibiotics to defeat them, and add to our limited arsenal of drugs, have been largely unsuccessful.

To make progress, scientists need a better understanding of how to design and tailor molecules that can get past these bacteria’s built-in defense mechanisms, including two protective membranes that repel antibiotics, and pumps that can eject antibiotics out of the cell before they have a chance to kill the bacterium. 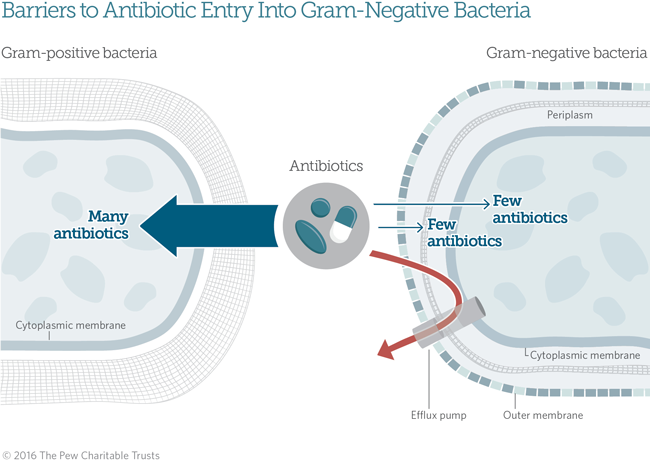 Gram-negative bacteria have a double membrane along with a variety of efflux pumps that expel drugs out of the cell, making it difficult to design new antibiotics that target Gram-negative pathogens.

There is also value in assessing whether the use of antibiotics in combination could circumvent resistance—as has successfully been done for other disease areas such as HIV and cancer. This should be an area of further exploration. Additionally, while research on traditional antibiotics is critically important, there is also a need to think about novel ways to attack bacteria, along with the possibility of employing alternative approaches—for example, exploring the prospect of using probiotics to prevent or defeat serious bacterial infections.

After more than 30 years of trying to find new types of antibiotics, it is clear that the status quo is not working.

There is an urgent need for a new research model that is targeted and coordinated —different from what is currently happening in both the pharmaceutical industry and academia. This initiative should build on existing efforts and engage researchers across the globe. Only then can we effectively tackle the foundational scientific barriers standing between us and the discovery of new types of antibiotics that are critical to fighting the most serious antimicrobial threats.

In May 2016, The Pew Charitable Trusts released a detailed plan for such an initiative – “A Scientific Roadmap for Antibiotic Discovery,” which identifies priority research goals and concrete steps to end the more than decades-long drought in the discovery of new types of antibiotics and pave the way for a sustained and diversified pipeline of novel therapies for generations to come. In July 2016, Wellcome in partnership with the Biomedical Advanced Research and Development Authority and other institutions, launched the Combating Antibiotic-Resistant Bacteria Biopharmaceutical Accelerator (CARB-X), which aims to support pre-clinical development of new antibiotics. Wellcome is also developing a strategic plan to maximize impact in the field.

There is clear consensus on the basic science challenges that are blocking antibiotic discovery and what needs to be done to overcome them; and that gives us hope. But there is no time to waste. It’s vital that these efforts begin now.

As rapidly evolving superbugs, such as mcr-1 and mcr-2 positive bacteria, continue to outpace our ability to innovate, inaction puts all of humanity at risk.

This piece is based upon discussions at a June 16, 2016 meeting of antibiotic research experts convened by the Pew Charitable Trusts, Wellcome and the American Society of Microbiology in Boston, MA. Findings from this discussion will be used to guide advocacy, and inform further action toward building the robust and sustainable antibiotic pipeline necessary to preserve public health.