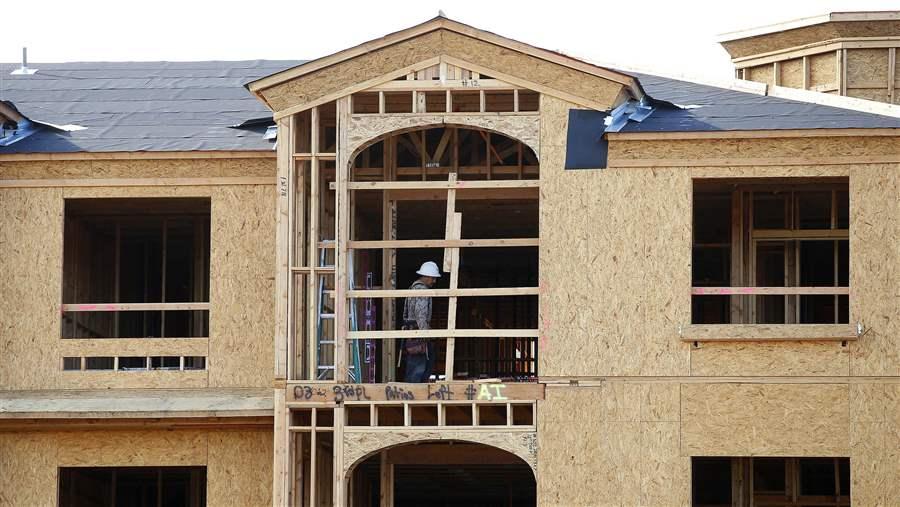 The growth of two recession-proof population magnets—North Dakota and the District of Columbia—slowed last year as more people headed to recovering housing markets in the South and West, which have attracted Americans on the move for decades.

All but six states (Alaska, Connecticut, Illinois, New Mexico, Vermont and West Virginia) grew in overall population last year, but 38 had smaller increases than the year before, according to a Stateline analysis of recently released census figures, which cover the period from the end of June 2013 to the beginning of July 2014. A smaller influx of immigrants was one reason for the more modest population growth.

Overall, population growth was concentrated in the South and West. States in those regions added more than 5,600 people a day between 2013 and 2014, compared to less than 900 per day in the Northeast and Midwest.

Despite a net loss in movers, most states in the Northeast and Midwest eked out modest population increases as a result of births and immigration, while the South and West both got big boosts from movers from other parts of the country.

Moves to the West doubled to 103,000, the largest number since 2008, which helped increase the population of the West by more than 800,000. Oregon and Washington had some of the largest increases in population from movers.

North Dakota had the largest percentage growth in population, growing by 2 percent, or 16,000. But that number was almost 30 percent less than last year’s 22,000 figure, and was the state’s smallest population jump since 2011. The state has experienced explosive population growth since oil was discovered in the Bakken region in 2006.

Another area that has grown rapidly in recent years, the District of Columbia, experienced a similar slowdown. It grew by only 10,000 residents between 2013 and 2014, down from more than 14,000 the year before.

Texas, where the population grew by more than 450,000 people between 2013 and 2014, has led the nation in population growth for a decade, since Florida last led in 2004. As a result, the state is in line to gain multiple seats in Congress for the second straight decade.

Election Data Services, a Virginia political consulting firm, estimated that if current trends continue through 2020, when Congress is reapportioned, Texas would gain three more seats, after gaining two based on the 2010 census.

Also gaining seats in 2020 based on the Election Data Services estimates would be Arizona, California, Colorado, Florida, North Carolina, Oregon and Virginia, which would gain one seat each.

Even without additional population growth, North Carolina and Texas each would get another seat in Congress after 2020, and Minnesota and Pennsylvania would each lose a seat, according to the estimates.

“Higher poverty populations impact state service demand and increase costs,” Murdock said. “Although closing the socioeconomic gaps for Texas minority populations will be difficult, it is clear that the state is better off if they become better off.”

States recovering from the collapse of the housing market came charging up in the population growth rankings: Nevada, which had one of the highest foreclosure rates in the country during the recession, moved from seventh to second by percentage increase, while Florida and Arizona also moved up in the top 10 list. Idaho and South Carolina joined the top 10, while South Dakota and Hawaii dropped off.

Brooking Institution demographer William Frey called the shifts a comeback for the Sun Belt areas of the South and West that grew rapidly in the mid-2000s only to see housing prices collapse and growth stop during the recession.

“Three of the Sun Belt’s biggest boom-then-bust states—Florida, Nevada and Arizona—appear to be especially rebounding in 2013-2014,” Frey wrote in a blog post last month.  He noted that Florida passing New York to become the third most populous state, after California and Texas, “symbolizes the completion of more than a half-century of Snow Belt to Sun Belt population shifts.”

Meanwhile Alaska, which last April projected adding almost 8,000 people to its oil-based economy, instead experienced a puzzling drop of 527 people. The state had not lost population since 1988.

“We weren’t expecting that,’’ said David Howell, a demographer for the Alaska Department of Labor and Workforce Development, adding that it appeared the expected number of people had not moved into the state to balance the number moving out.

“We have a very transient population. About 40,000 people move in and out on an annual basis,” Howell said. “It appears we got the normal number of people moving out, but we didn’t get as much in-migration as years past.”

The recent drop in oil prices does not explain the change, Howell said. Prices were still high, near $100 a barrel, in the middle of the year when the loss was recorded.

Immigration in all four regions, after rising briskly in previous years, showed almost no gains last year, at a time when at mid-year Mexican immigration was slowing, border security was being tightened and the surge of Central American children at the border was just starting to be addressed.

Some of the larger drops were in North Carolina and Hawaii, where immigration has decreased for two years straight, despite a large increase in the early part of the decade.

Immigration has slowed or reversed population losses in the nation’s heartland, and fueled growth in Sun Belt, Pacific Northwest, and Mountain states over the last 20 years, according to a report last month by the Pew Immigration and the States Project. Last year, the number of new immigrants remained steady at about a million, after increasing by about 40,000 a year earlier.

Some have seen a recent decline in Mexican immigration and even a possible shift toward returning home, because of soft demand for labor and tightened border security. A recent Pew Hispanic Center report found the population of unauthorized immigrants was down in 14 states where Mexican immigrants are concentrated.

But the census sees immigration continuing to rise in the long term, eventually becoming the primary driver of population growth, in projections published last year.

Future waves of immigration will be smaller, said Thomas Mesenbourg, an adviser to the Census Bureau, but they will have a greater effect as baby boomers start to die off.

“This projected milestone reflects the mix of our nation's declining fertility rates, the aging of the baby boomer population and continued immigration,” Mesenbourg wrote.

Murdock, the Texas demographer, said the growth of Hispanics will continue to dominate population changes even if immigration wanes, because so many are already here and having more children than other groups.

Minorities are approaching 85 percent of the children in the state’s major cities, and most of the births now driving population increases are Hispanic.