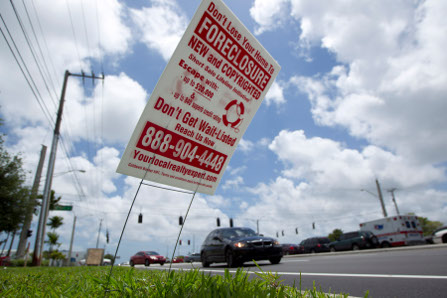 A sign offering help to homeowners in foreclosure proceedings stands by a street in Pembroke Pines, Fla. Florida has the nation's highest foreclosure rate, but it and many other states are underutilizing a federal fund designed to help homeowners. (AP)

Some of the states hit hardest by the foreclosure crisis aren't spending millions of dollars that the federal government has set aside to help struggling homeowners, a new report shows.

Of $7.6 billion the federal government has provided in the “Hardest Hit Fund” to help homeowners, states have disbursed only $3 billion, according to a report from the Congressional Research Service, a nonpartisan service that provides information to Congress.

The Hardest Hit Fund is one of several initiatives the federal government created in the aftermath of the recession to help families keep their homes. Eighteen states and the District of Columbia have 66 programs that use money from the Hardest Hit Fund, which is allocated to each state depending on various factors, including the impact of the housing crisis in the state and the percentage of residents who are unemployed or underemployed.

CRS found that states have disbursed widely varying percentages of their Hardest Hit money, from 21 percent in Alabama to 84 percent in Rhode Island. Some of the states hit hardest by the foreclosure crisis have distributed the lowest percentages, including Florida (26 percent), Michigan (29 percent), Arizona (34 percent) and California (36 percent).  As of October, Florida still had the nation's highest foreclosure rate. Nevada, which has distributed a little more than half of its Hardest Hit money, had the second highest rate.

In addition to Rhode Island, Oregon and the District of Columbia also disbursed a relatively high percentage of their Hardest Hit money, nearly 70 percent.

The first dollars from the Hardest Hit Fund flowed to California, Arizona, Florida, Nevada and Michigan in February 2010. Those states had the largest declines in home prices and high foreclosure rates. Later in 2010, the federal government expanded the program to 13 states and D.C., all of which had unemployment rates higher than the national average. States are required to submit plans to the Treasury, which administers the program, explaining how they would use the money.

Critics say the Treasury is at least partly to blame for states' low payout rates.  In a separate report in late October, the Office of the Special Inspector General criticized the Treasury for failing to specify how many homeowners states should help.

Last month, the Treasury approved changes to some of these states' Hardest Hit programs:

These changes were included in the latest monthly report that the Treasury provides to Congress on the Troubled Asset Relief Program, or TARP.

Information about the Hardest Hit initiatives in the 18 states and D.C., including state web sites, fact sheets and quarterly reports, can be found here.