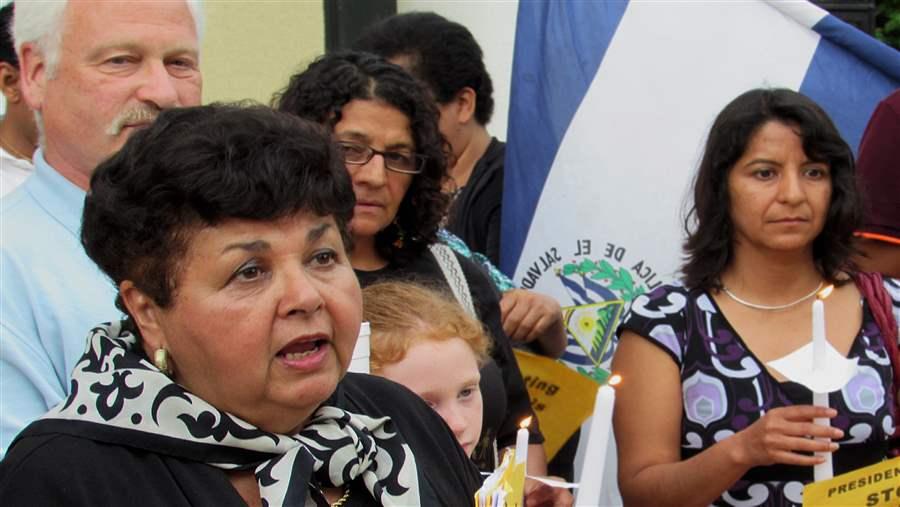 ARLINGTON, Virginia -- It was the girl’s first time in a court, her father said. She stared ahead mournfully, impervious to the judge’s attempts to make her smile. Instead, she bent her pony-tailed head in a barely detectable shrug.

Ten-year-old Jael Cifuentes fled El Salvador, where relatives were caring for her, because gangs had begun to target her, knowing her U.S.-based parents were sending her money. Now, like thousands of other Central American children, she was enmeshed in a daunting legal process, trying desperately to stay. “The gangsters want money and they want the kids to commit crimes, or they say they’re going to hurt the relatives,” said her father, Benjmin Cifuentes.

The number of Central American children crossing the Mexican border by themselves has skyrocketed from less than 4,000 in fiscal 2011 to almost 44,000 in fiscal 2014. The surge, prompted by growing violence in those countries, has overwhelmed border detention facilities and generated open hostility in many communities around the country.

But the children have gotten a warmer reception in places where Central Americans are the predominant immigrant group. Those places include Washington, D.C. and its suburbs in Virginia and Maryland. Long Island, New York, and parts of Louisiana also are home to large Central American communities, according to a Stateline analysis of American Community Survey data from 2012, the most recent available. 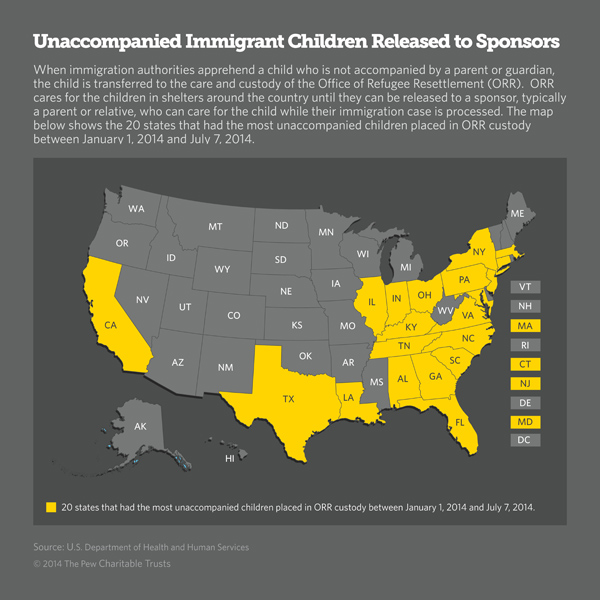 Congress remains in a partisan standoff over how to handle the surge in unaccompanied minors, but all sides are asking for speedier deportations to discourage any more children from crossing the border alone. One alternative, proposed recently by the White House, is to let children apply for refugee status in their home countries before they cross the border, which might give them a more direct route to legal status.

Ana Sol Gutierrez, a Salvadoran-born Maryland state delegate, has led prayer vigils near the White House to protest any changes to a 2008 anti-trafficking law that grants greater legal protections to unaccompanied children who enter the U.S. illegally from countries other than Mexico or Canada.

“They want to send them back over the border as soon as they come,” Gutierrez told a crowd in Spanish at a vigil earlier this month. “That would be sending them to their deaths.”

One of the oldest Central American immigrant communities is in Louisiana. Beginning in the 1930s, Honduran-dominated neighborhoods grew up in the New Orleans suburb of Jefferson Parish, where the local United Fruit Company brought many children of Honduran employees to attend school. Many Honduran-American families can trace their roots in New Orleans back generations.

More recently, Salvadorans arrived in large numbers in the Washington, D.C. area. By 1980, the Salvadoran population in the region had already surpassed that of most other immigrant groups.

“These were women who left their children behind and ironically came to take jobs caring for children and cleaning houses, for the middle-class women as they began to leave the home and have professional careers downtown,” said Sonia Nazario, a California author who wrote a 2002 book on child migration from Central America, “Enrique’s Journey.”

Violence and poverty were factors even in the earliest waves of immigration, said Enrique Pumar, who is studying Salvadoran history in Washington, D.C. at Catholic University. “They arrived in large numbers starting in 1978 in response to the devastating civil war and general violence in their society,” Pumar said.

In recent years, rising gang violence in Honduras and El Salvador has prompted even more people to seek safety in the U.S. Honduras has had the highest murder rate in the world since 2010, according to the U.S. State Department, and the most violent parts of Honduras are the largest sources of recent child immigration, according to an analysis of Border Patrol data by the Department of Homeland Security.

Children from El Salvador and Honduras, the report concludes, “come from extremely violent regions where they probably perceive the risk of traveling alone to the U.S. preferable to remaining at home.”

Generally, the harshest anti-immigrant rhetoric has been in places where there are few Central American immigrants. Nebraska Gov. Dave Heineman, a Republican, asked for the names of all children and sponsors in order to “ensure that any illegal individual is not getting federal and state benefits.” But Nebraska’s only Central American community is Wheeler County, which has a total of 36 immigrants.

In contrast, New York City, near some of the nation’s largest Central American-dominated counties on Long Island, has formed a task force to offer new services, including legal help with court cases.

Sometimes reaction varied even within friendly states, such as when Maryland Gov. Martin O’Malley, a Democrat, publicly protested against any federal plan to deport the children, but opposed use of a facility to house them in a largely white area of his state where most immigrants are Asian. O’Malley said he feared the children would not be welcomed there.

In California, where Democratic Gov. Jerry Brown said he would support more shelters, saw some of the most disruptive anti-immigrants protests in the nation when demonstrators blocked buses carrying immigrant children in Murrieta on July 7, forcing the buses to detour through San Diego.

Nationwide, few schools have expressed concern over the number of new immigrant children expected to enroll this fall. In Los Angeles, for example, school officials caution that they will not know exactly how many Central American students are coming until school opens on August 12. Nevertheless, they say they have the “capacity, expertise, and knowledge of working with immigrant families” to contend with any influx. “We welcome all students with open arms,” a district spokesperson said.

An exception is Miami, which has one of the largest school districts in the country. Officials there are asking the federal government for $1,959 per student to provide extra services such as language help.

One social service that does seem to be in short supply is legal help. Many in the Arlington courtroom said they had called a list of potential legal providers, but had gotten only refusals or busy signals. Rebecca Walters, an attorney at Ayuda, a non-profit that offers legal services to immigrants in Virginia, said her group opened the phone lines for one hour in July and closed them again after 300 calls.

“Our group is just completely overwhelmed by the need,” Walters said. “Some of these children would benefit from counsel but it’s going to be very difficult for them to get it.”