In 1983, The Pew Charitable Trusts was already 35 years old, and, while largely focused on responding to incoming requests for funding, successfully making a positive difference with its philanthropy. Much as it does today, the organization based its decisions and actions with a respect for its founders’ values of stewardship, service, and innovation.

In September of that year, Pew made its first hire of a staff member with specific expertise: Rebecca W. Rimel, the first nurse to hold a faculty position at the University of Virginia’s medical school, serving as an assistant professor of neurosurgery. Rimel would initially oversee health care projects and would go on to become executive director of Pew in 1988 and then president and CEO six years later, a position she held until June 30.

“Over the course of Rebecca’s tenure, Pew has had tremendous impact, improving communities and the daily lives of countless individuals,” says her successor, Susan K. Urahn, who joined Pew 25 years ago, also serving in a variety of roles, including executive vice president and chief program officer. “She has been a wise steward of the organization’s reputation and values, and I can’t thank her enough for her leadership and example.”

Rimel’s arrival at Pew came as the Trusts’ board of directors deliberated how best to use the organization’s substantial resources to address new and emerging challenges. Pew’s grant-making had been anonymous, and largely addressed local issues. But Rimel proposed establishing a program to support the research of young, promising biomedical scholars. One of the first of its kind in the field, it would be called the Pew Scholars Program in the Biomedical Sciences, making it among the organization’s first national initiatives—and the first to have the Pew name attached.

It was not an easy sell for the new assistant vice president. J.N. Pew III, the son of founder Joseph N. Pew Jr., had served on the board since its inception and was an authoritative voice on the evolution of the organization. He believed that maintaining the founders’ values included honoring their desire to avoid recognition for their generosity and their belief that good works were their own reward. Yet the board accepted Rimel’s promise to carefully steward the Pew name in keeping with those intentions and approved the biomedical scholars program. To date, it has produced three Nobel laureates—with an ironclad commitment to the organization’s reputation an equally lasting achievement.

One of the laureates, Craig Mello, says, “What Rebecca has done that’s so important is she has given these young scholars a sense of purpose beyond our research, integrating us back to the whole mission of Pew—which is, of course, to better our whole community.”

In that same period, Pew also began work to improve access to health care for the homeless. In cooperation with the United States Conference of Mayors and the Robert Wood Johnson Foundation, Pew funded programs in 19 U.S. cities, creating a model for the McKinney-Vento Act of 1987, one of the first pieces of federal legislation to address homelessness.

By 1989, a year after Rimel became executive director, Pew was the nation’s second-largest foundation as measured by giving and focused on six program areas: culture, education, the environment, health and human services, public policy, and religion. That would soon include support of renowned documentary filmmaker Ken Burns. After his 1990 film on the Civil War broke viewership records on public television, Rimel invited him to visit Pew’s Philadelphia offices to see what else he had planned, especially if it involved Benjamin Franklin or the Constitution—subjects close to Pew’s hometown roots. “I do the Constitution in every film I do,” Burns told Rimel, inviting her to his New Hampshire studio to see early cuts of his upcoming film on baseball. He recalls a spirited conversation about America’s national pastime, civil rights, and democracy, which prompted Rimel to leave the screening saying, “I get it.”  Pew would go on to support many of Burns’ documentaries—including a forthcoming film on, yes, Franklin.

“We need the transformative power of art, wherever it can reveal itself, because it is a kind of glue that makes the most complex stuff happen,” Burns says. “And it has always been impressive to me that Rebecca and The Pew Charitable Trusts have understood this in their bones.”

Pew had begun funding environmental projects in 1974, with one of the first being Woods Hole Oceanographic Institution, and over the following years has dramatically expanded its portfolio. Key successes have included support for the creation of vast marine protected areas. The first—Papahānaumokuākea Marine National Monument in the northern Pacific Ocean—was created by President George W. Bush in 2006. A decade later it was expanded by President Barack Obama, making it the largest protected area, on sea or on land, in the world.

In 1995, Pew began funding the Center for the People and the Press after the Times Mirror Co. ended its support for the prestigious public polling operation. The first Pew-supported poll was in January 1996, focused on that year’s presidential primary. The center formed the foundation of the eventual consolidation of several other Pew-sponsored projects into the Pew Research Center. Don Kimelman, the former deputy editorial page editor of The Philadelphia Inquirer who had become a managing director at Pew overseeing information initiatives, was tasked by Rimel with creating the center.

“Rebecca was its main champion,” Kimelman says. “Even though Pew’s primary mission is to effect change in the world, and does that through a lot of policy advocacy, Rebecca was also a champion of nonpartisan research that didn’t have an advocacy agenda.”

While the research center has a national and increasingly international focus with its surveys, The Pew Charitable Trusts retains a strong sense of commitment to Philadelphia, where it is based. It helped create what is now Visit Philadelphia, which promotes tourism, and supported renovations to Independence Mall, a three-block section of Independence National Historical Park that includes the Liberty Bell Center, the Independence Visitor Center, and the National Constitution Center. Pew also has provided grants to a host of social service agencies and arts organizations, including the Barnes Foundation when it relocated its historic collection to a new home on the Benjamin Franklin Parkway.

As the 20th century came to a close, Pew readied itself for a change in how it would do business. Rimel and the board wanted to begin running programs and seek policy improvements directly, which as a foundation it was limited in doing. In 2002, Pew became a public charity and began to build a staff of subject experts, expand offices in Washington, D.C., and open new ones abroad to more effectively collaborate with other foundations and partners to meet societal challenges.

“That’s something nobody else has done,” Joel L. Fleishman, who directs the Center for Strategic Philanthropy and Civil Society at Duke University, has said. “It is an almost unprecedented story in American philanthropy.”

In the ensuing years, Pew has embarked on a range of projects, always based on research and data and always in a nonpartisan fashion. The organization helped spur the first update of the nation’s food safety laws since the Great Depression, the enactment of new consumer protections in credit cards and other financial tools, and the expansion of dental care to young children. Pew also promoted the reform of many vastly underfunded pension funds for government workers around the country, creation of new rules that ensure the votes of military members stationed overseas are counted, and the conservation of Canada’s boreal forest, helping to secure some form of protection for close to a billion acres.

Those accomplishments have been possible in great part because of the credibility and trust the Pew name has come to engender—something Rimel would steward from her first proposal for the biomedical scholars program to the institution’s latest work in conserving the environment as far away as the Australian Outback.

“Pew’s founders entrusted us with great resources and inspired us with their entrepreneurial spirit in seeking to improve the world. It has been an honor to uphold that trust and to be encouraged by their inspiration,” Rimel says. “Over the past three and a half decades, we have spoken truth to power and righted many wrongs. That is at the heart of Pew’s mission, and I am certain my colleagues will meet with much continued success in their commitment to best serve the public interest.”

A New President and CEO for Pew

Susan K. Urahn will become the president and CEO of The Pew Charitable Trusts on July 1, taking the reins from Rebecca W. Rimel, who is retiring after leading the organization for 32 years. 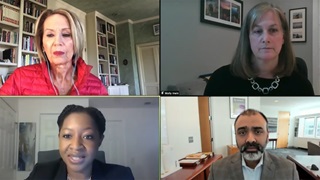