When I first came to Patagonia in the summer of 1995, the roads were small and unpaved and it all felt very adventurous and remote. As a biologist, you dream of exploring new regions and discovering new species, and I knew I had come to the right place. Chilean Patagonia is the most beautiful, least known, and most exciting place to explore natural history. Since 2002, I have made it my home.

Patagonia has some 50,000 miles of coastline—if you could stretch it all out, it would wrap around the planet twice. It also has the largest fjord region in the world—greater than Norway’s—created when huge ice fields from long ago retreated and the remaining basins filled with water.  I think one of the biggest tasks in science today is to understand this region, because only if we understand it will we love it, and only if we love it will people want to protect it and use it sustainably. But it is a huge and difficult job.

Several factors have made Patagonia hard to explore. Researchers here generally worked close to their universities—there was little known about the areas close to them, so they had little incentive to travel farther, where conditions were more challenging.  As expeditions were launched in the fjords in the 18th and 19th century, the big boats often stayed in the deep waters because of fears that the vessels would be damaged by the rocky shorelines, and they missed the rich biodiversity along the steep fjord walls.

The technology of that era also didn’t allow for deep-water exploration—the fjords have a freshwater layer, with little diversity on the top. Most of the fascinating and colorful marine life and cold-water corals are deeper than 50 feet. That requires sophisticated diving gear and robots.

Today, we have those tools, but the research is very slow and time-consuming because we are virtually starting from scratch in an unexplored area, and there is so much to inventory and study just to give us a baseline of what’s there.

Further delays come from the weather. We get extreme rainfalls and storms. And the farther south we go, the wilder it gets. In many regions, the coastlines we seek to explore can only be accessed a couple of days a year because of strong storms. And we sometimes find the most unexpected things.

In 2015, we found more than 350 dead sei whales—big baleen whales—on some remote shores many weeks after they had died. Where in the world can this happen that you have hundreds of dead whales for weeks, and nobody sees them? There were so many that we had to get satellite pictures instead of researching it on the ground—it was actually easier to take pictures from space.

But as difficult as the conditions can be, I continue to be fascinated by the fjords. They have a few species from the deep sea living in shallow water, which allows us to study them without a submarine. That’s why the Huinay Scientific Field Station, on Comau Fjord, about 60 miles southeast of the city of Puerto Montt, is an attraction for scientists studying cold-water corals. It’s also an attraction for scientists studying ocean acidification. It’s been calculated that conditions in the fjords match how acidic the oceans will be by 2100. So, we basically have a laboratory for studying what will happen in the future, and how corals and other calcified animals deal with it.

The freshwater fish in Patagonia are yet another attraction for researchers. There are salmon all over this region that are not native to the Southern Hemisphere, and we don’t know the area’s original fish fauna. It’s likely that many species have already gone extinct, and that others are among the most threatened fish species in the world because of the competition with the salmonids.

And as remote as this region is, I am seeing changes occurring just in the relatively short time that I’ve been here. When I began diving here 20 years ago, there was a lot of diverse, colorful sea life. Today, diversity has been greatly reduced, and the abundance of sea life has been reduced by up to 75 percent. There are many species we can hardly find anymore in Comau Fjord.

So, the very baseline of what we are here to study is shifting. But the shift is silent and slow. People who visit say, “Oh, it’s so beautiful. It’s incredible.” And although it is still incredible, it was much, much more diverse and abundant two decades ago.

The most reasonable explanation is that a mixture of human activities and climate change are causing these differences. But the problem is that we have many things going on at once in Chilean Patagonia: We now have small-scale fisheries, shellfish harvesting, lots of salmonid farming. And we also have some natural environmental cycles and climate change. So, for us as scientists, it’s very tricky to say exactly what activity is behind certain changes, and to understand what is happening and why.

If we had the baseline data that we would in other more studied areas, we would see which regions had changed. We need reference areas without human impact, and we hardly find these anymore.

And Chilean Patagonia is not one place, but many: It’s extremely diverse—it includes three biogeographic provinces and at least 13 to 15 different eco-regions. We may learn a bit and have a small reference area in central or southern Patagonia, but that adds little to our knowledge of what’s happening in northern Patagonia. Basically, every fjord is different and contains different life. We really cannot even predict what we will see if we go diving a couple of hundred meters next to a place we know, because each place can look completely different.

My work here has convinced me that we need marine protected areas throughout the eco-regions of Chilean Patagonia. As long as we don’t understand what is going on in a region and what effects human activities have on a place, we must be cautious. Until we understand how we can sustainably use these areas, we should safeguard enough regions from human exploitation until we understand its impact.

The heritage of this part of the world is not only for Chileans but for everybody on the planet, because Chilean Patagonia is a unique place on Earth. And even if you live far away, you should want to preserve it for the next generations. To me, it’s the most beautiful place on Earth.

Vreni Häussermann, a 2011 Pew marine fellow, is the scientific director of the Huinay Scientific Field Station in Chilean Patagonia. As part of her Pew fellowship, she worked to increase awareness and appreciation of fjord biodiversity and the importance of sustainable management, conservation, and marine protected areas. 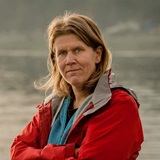