Much of the world began to learn about the beauty in the ocean from the films and television programs by Philippe’s grandfather, Jacques Cousteau, more than a half-century ago. He revealed underwater pictures of teeming fish and spectacular corals at a time when people thought the ocean was mysterious—but also bountiful. At that time, we seemed to think the water was a place that could absorb all we dumped into it and would allow us to extract all the fish and whatever else we wanted.

As a young man in the 1930s, Jacques was drawn to the depths of the ocean and motivated by a desire to share what he saw. He helped invent the Aqua-Lung—the first scuba equipment—which forever changed humans’ ability to explore underwater.

Jacques' own exploring allowed him an early perspective that we all need today. The ocean is not the bountiful and invulnerable place we once thought. He saw this for himself early on. As his film and television work reached global audiences in the 1960s, he was observing the declining health of the Mediterranean Sea and knew his focus needed to change. As he began production of the “The Undersea World of Jacques Cousteau” television series, he told our family that our work was to be not about exploration—but conservation.

It is a mission we continue to pursue because the needs of the ocean have never been greater.

Today, society still lacks a basic literacy about the ocean and the issues challenging it, from overfishing to pollution to a changing climate. We must develop the care and concern among the broader public that can bring about the political, economic, and social changes necessary to protect the ocean on which the very health of the planet—and all of us—depend.

Unfortunately, as a conservation community, we’ve done a pretty poor job of communicating the ocean’s challenges. We’ve also done a bad job of explaining its potential—that it is a source of hope and opportunity and is our biggest key to combating climate change.

That’s because for too long we have been preaching an irrelevant message to the ocean literate, which is a too-narrow sector of the population. (Yes, dying polar bears have come to symbolize climate change for many people—yet has that shifted behavior?) We must do a better job of expanding our audience, and we must reach out to people of color and those in historically neglected communities who, tragically, also tend to be on the front lines of environmental collapse.

Those who live closest to the water, including many Indigenous communities, know firsthand the effects of overfishing, pollution, and climate change on the ocean. We have an opportunity for change—and can take hope—when we listen to their voices.

We also have hope in young people. The big ocean literacy gap we see is mainly with older audiences. Young people understand better than their elders that climate change is a looming catastrophe and that we need to protect our seas. We’ve never once walked into a classroom and had a student say, “Climate change? Meh.” By enlisting and energizing this new generation of conservationists, we can save the ocean and the planet.

Although many activists approach climate change with a focus on land-based solutions, the ocean is the Earth’s biggest and best resource. Ocean ecosystems such as mangroves and seagrass grow quickly and sequester a lot of carbon. One square acre of mangroves absorbs four to five times more carbon than a square acre of rainforest. And while a tree takes years to grow tall, kelp can grow a foot a day.

The sea, now overfished and polluted with plastics, can also restore itself—if we just leave it alone.

In Bikini Atoll, where the United States conducted nuclear testing during the Cold War—wiping some small islands off the face of the planet—the yield was 1,000 times stronger than the bombs dropped on Hiroshima and Nagasaki. Everything from coral to fish died. We went back 60 years later, and although the crater of the blast is still a desert, just a couple of feet over the rim of the blast site is a spectacular and flourishing underwater ecosystem.

Humanity threw its worst fire and brimstone at this place, but by letting this ecosystem do its own thing for 60 years, it hasn’t just recovered, it is thriving. This is what happens in marine protected areas when we step back and let nature work—waters cleanse, fish return, and underwater forests grow.

And so that is why we are excited—and hopeful. We know we have tools to help restore our planet. And we have a growing, fired-up new generation. Young people are connected, switched on, and informed in ways unprecedented in history. This new community of conservationists can help communicate to the rest of the world that we must tend to and care for the ocean before it’s too late.

They know, as Jacques Cousteau did, that we’re all in the same boat.

Philippe Cousteau Jr. and Ashlan Cousteau are ocean conservationists and filmmakers. The couple helps lead EarthEcho International, an environmental education nonprofit that works with youth around the globe, and are board members of Antarctica 2020, an international organization advocating for marine protected areas. 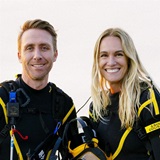 In this episode, we speak with Ashlan Cousteau and Philippe Cousteau Jr., who, inspired by the legacy of Philippe’s grandfather, undersea explorer Jacques Cousteau, have dedicated their careers to ocean conservation.