These 3 Steps Could Save the Australian Outback 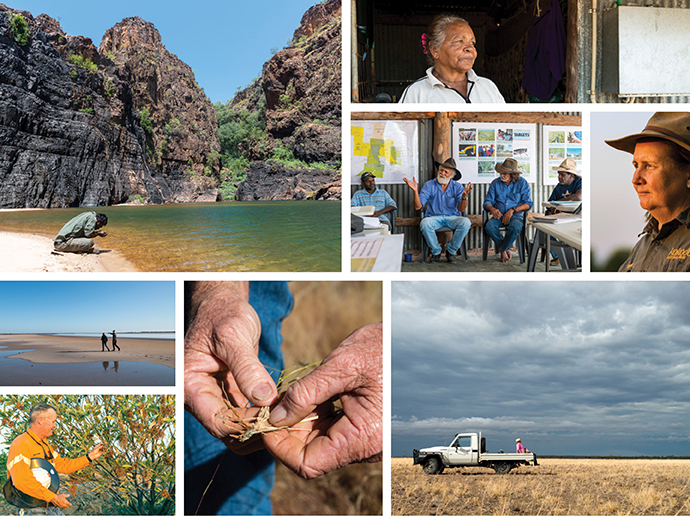 Although the Outback has been continuously inhabited for close to 50,000 years, rivers still flow freely here, uninterrupted by industry, and wildlife still migrates across the landscape as it did centuries ago. Research for “The Modern Outback,” the first Outback paper published by The Pew Charitable Trusts, identified a counterintuitive fact: in many parts of the Outback, native animals such as the Bilby became locally extinct when people left the land and no longer managed it.

However, while the Outback is an unforgiving environment, it is also fragile and its health is at risk. Feral animals and noxious weeds have spread across the landscape, devastating native flora and fauna. Massive uncontrolled wildfires have scarred parts of the landscape, often causing long-term damage and local extinctions. Pew’s latest research found that these impacts are heightened in areas of the Outback where people no longer live.

Pew’s new study "My Country, Our Outback: Voices From the Land on Hope and Change in Australia’s Heartland," features a dozen case studies of land managers working to shape a modern Outback that sustains both people and nature.

The second in the Outback paper series, “My Country, Our Outback” also includes recommendations for legal and policy changes to create more diverse opportunities for sustainable enterprises to attract more land managers to the region and prevent the further decline of the Outback’s natural heritage. The study can be downloaded here. There are three key steps to achieving a healthy Outback and safeguard the heart of Australia.

Many areas of the Outback have fewer people caring for the land than at any time in the past 50,000 years. Scientists have found that the greatest loss of biodiversity is occurring in areas where people no longer actively manage either the land or the threats to it.

With the feral animal, weed and fire threats almost pervasive across the Outback and their detrimental impacts increasing, “More so than ever before, the country needs people to care for it,” said Professor John Woinarski, one of the report’s authors.

Almost 90 percent of Australians now live in cities and towns within 50km of the coast. This makes Australia the most urbanised continent in the world, and while many Australians have a nostalgic sense of the Outback, few know anything else about it or why it is important.

Still, the Outback is the backstory of Australia. Indigenous Australians, with knowledge honed over tens of thousands of years, shaped the landscape, while European settlers created economic opportunity for the fledgling nation in the 1800s. Now, however, many laws governing the Outback are outdated and inflexible to the needs and opportunities of a modern country. The resulting loss of both native species and people to manage the land has accelerated that decline.

For example, around 40 per cent of Australia is held under leases that allow landholders to graze only sheep, cattle or goats. This has put the brakes on diversifying how people manage the land. State governments should reform the leasehold policy to encourage practices such as carbon farming, ecotourism and stewardship programs that also help to restore and revive the landscape.

By recognising the value of sustainable management on Indigenous and non-Indigenous owned land, and infusing it into thoughtful, long-term policy, a rapid expansion of the positive work showcased in “My Country, Our Outback” is possible across the Outback.

Pew is working with a broad range of stakeholders in the Outback, including Indigenous people, scientists, conservation organisations, industry, and government agencies, to conserve these critical landscapes and habitats. The Pew study &lsquo;My Country, Our Outback&rsquo;, set for release June 20, explores both that work and the strong connection Australians have to the Outback.

Recent years have brought striking growth in the number and extent of Indigenous Protected Area and Indigenous Rangers across the Outback, with 800 full-time rangers and 75 Indigenous Protected Areas covering 67 million hectares (an area 10 times the size of Tasmania) now in place. These programs are a source of great pride to local communities and are creating not only environmental benefits, but social and economic improvements as well.

These programs have nurtured land, communities and culture, and contributed to far better management across large areas. A significant part of this success is the broader dissemination of Indigenous expertise—for example, in managing fire, which has helped reduce uncontrolled wildfires and, in some areas, increase wildlife populations.

“Our elders had the vision of making sure that this land they once lived off would stay exactly the same for us as it was for them, and we also want that for our kids and the next generations,” said Melanie Herdman, chair of Dhimurru Indigenous Protected Area’s board.

“There are two systems that we use. One system is the Yolngu system—our kinship system to land and how we look after our country. And then, on the other side, we use the tools from the balanda world—the Western world.”

This “both ways” philosophy combines ancient and modern knowledge to honor tradition and ensure the best future possible for people and nature in the Outback.

For more than a decade, the Indigenous Ranger and Indigenous Protected Area programs have produced consistent success far surpassing that of any similar initiatives. These extraordinary programs deserve additional support to further protect the Outback and transform many more Indigenous lives.