The Pew Charitable Trusts' Oceans North Canada led an Arctic science expedition off Greenland's west coast with the goal of reaching Lancaster Sound in June 2011 to study one of the greatest whale migrations in the world. From the deck of a 45-foot, ice-reinforced trawler, expedition members observed bowhead whales and recorded whale and seal vocalizations – the first time on record that a boat this size has attempted this journey so early in the spring. During the month-long voyage, two scientists and an Inuk hunter were part of a team collecting important new data about Arctic whales.

Lancaster Sound, at the eastern entrance to the Northwest Passage, is one of the most biologically rich areas of the circumpolar Arctic. Eighty-five percent of the planet’s narwhal travel through the Sound each spring. They are joined by one-seventh of the world’s beluga whales, thousands of bowhead whales, seals and millions of seabirds.

The Inuktitut name for Lancaster Sound is Tallurutiup Imanga, likely a reference to the Sound's dramatic limestone cliffs near Dundas Harbour that look like the tattooed chin of a woman – or “Talluruti.” Tallurutiup Imanga can be translated as "the ocean area of Talluruti." The English explorer William Baffin named these waters Lancaster Sound in 1616 after the financier of his expedition, Sir James Lancaster.

The Inuit communities of Pond Inlet, Arctic Bay, Grise Fiord and Resolute Bay in Nunavut hunt and fish in these waters, depending on Lancaster Sound’s natural wealth for their economic and cultural wellbeing. They have been at the forefront of protecting this vital place from proposed oil and gas development and other threats. 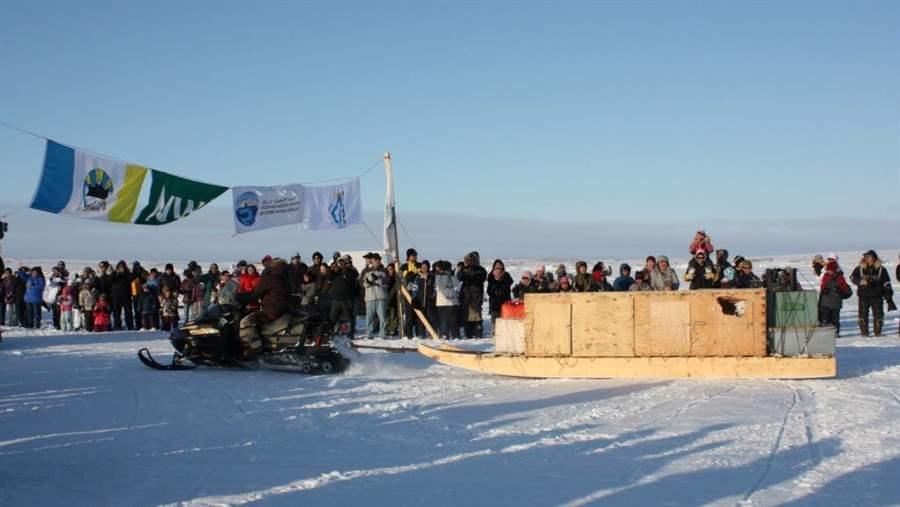 Although ice conditions prevented the ship from reaching Lancaster sound, this expedition highlighted the strong connections between marine regions in Greenland and Canada. Scientists monitored marine mammal acoustics and did conductivity, temperature, depth profiling. Their findings are expected to help document the biological productivity of this region, increase scientific knowledge, and raise awareness about why the Canadian government needs to move quickly to protect the Sound by designating it a national marine conservation area.