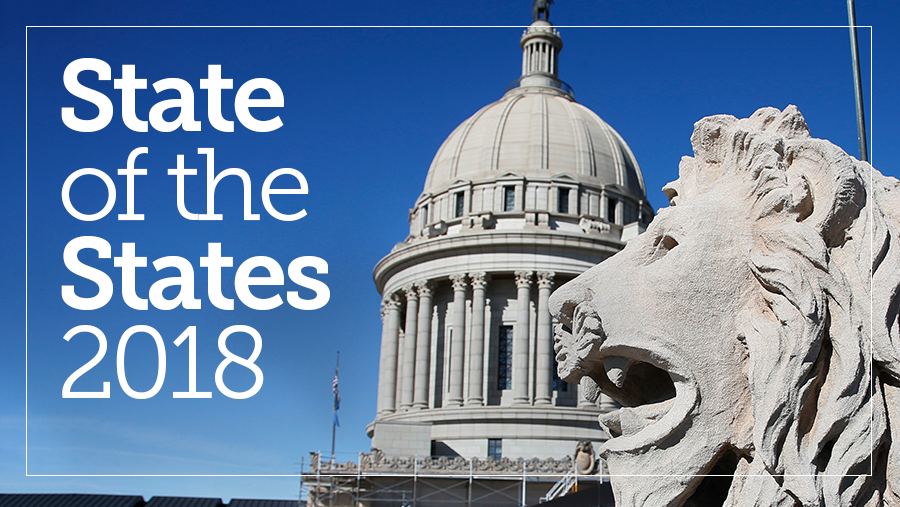 As the federal government has pushed for more oil and gas drilling and rolled back certain environmental regulations, some states have fought back with lawsuits and new pollution standards of their own. Those fights are set to continue in 2018, as lawmakers in several states float plans for new carbon taxes or cap-and-trade systems.

Amid heightened awareness of the issue in Hollywood, the media and politics, legislators in multiple states will re-evaluate laws dealing with sexual harassment and assault. Lawmakers in at least a dozen states have introduced bills that would extend the statute of limitations on prosecution of sexual assault and associated civil suits, expand rights for victims of sexual assault, and adopt a “yes means yes” standard for consent.

As the Trump administration pushes for major cuts to federal welfare programs, many governors and legislatures are taking advantage of the changed political climate to restrict food stamps, Medicaid and housing assistance in their own states. Enrollment in the programs is expected to fall as states tighten eligibility and require recipients to work, receive drug testing, or consistently document their need.

The elimination of the Affordable Care Act’s “individual mandate” (as part of the recently enacted tax law) is prompting some states to act on their own to preserve the federal health law’s requirement that nearly everyone sign up for health insurance or pay a tax penalty. Several other states are trying to shore up insurance exchange markets with state reinsurance plans, and a few states are poised to expand Medicaid, as a way of increasing the number of residents with health insurance and stabilizing insurance premiums.