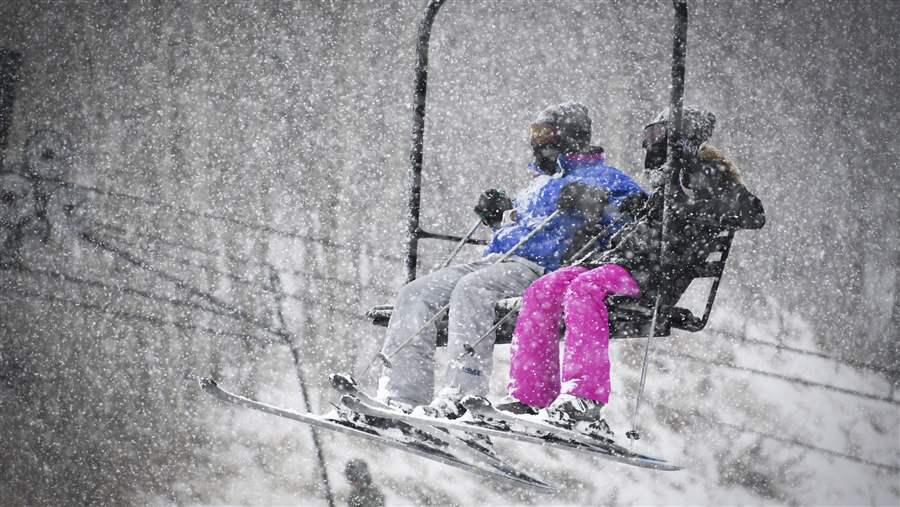 Skiers ride the chairlift at Sunlight Mountain Resort in Glenwood Springs, Colorado. Water scarcity and new research are spurring ski resorts, water districts and states across the West to invest in “cloud seeding,” a technology that aims to increase natural snowfall.

CHEYENNE, Wyo. — Machines that prod clouds to make snow may sound like something out of an old science fiction movie. But worsening water scarcity, combined with new proof that “cloud seeding” actually works, is spurring more states, counties, water districts and power companies across the thirsty West to use the strategy.

Last month, a study funded by the National Science Foundation proved for the first time that the technology works in nature. That study, combined with other recent research, has helped make cloud seeding an attractive option for officials and companies desperate to increase the amount of water in rivers and reservoirs.

In Colorado alone, more than a hundred cloud seeding machines are set up in mountainside backyards, fields and meadows. Some older versions of the contraptions look like a large tin can perched on top of a propane tank. New ones are large metal boxes festooned with solar panels, weather sensors and a slim tower.

Their goal is the same: to “seed” clouds with particles of silver iodide, a compound that freezing water vapor easily attaches to. That makes ice crystals, which eventually become snowflakes.

Colorado’s $1 million a year program has been around since the 1970s and is paid for not just by the state, ski resorts, and local water users but also water districts as far away as Los Angeles that want to increase snowmelt into the Colorado River, which sustains over 30 million people across the Southwest. Currently, most of the river basin is experiencing a drought.

“Everyone starts to get nervous when there’s no snow in Colorado,” said Joe Busto, the scientist who oversees Colorado’s cloud seeding program.

Major urban water districts in Arizona, California and Nevada have funded cloud seeding in the Rocky Mountains for over 10 years and are now close to signing an agreement with officials in Colorado, New Mexico, Utah and Wyoming to split the cost of nine more years of seeding.

Cloud seeding is a relatively cheap tool for bulking up the water supply in Lake Mead and other reservoirs, said Mohammed Mahmoud, a senior policy analyst for the Central Arizona Water Conservation District. The up to $500,000 annual commitment the district is making to the regional agreement comprises a tiny fraction of its budget, he said.

“The whole thing is propaganda,” said Jamie Kouba, 32, a farmer from Regent, North Dakota, who argues that cloud seeding is decreasing rainfall in his area, rather than increasing it. He’s organizing local farmers in a campaign against the practice.

Scientists discovered in the 1940s that certain molecules make a good foundation for snow. In one famous experiment, a chemist made it snow by dumping six pounds of dry ice out of an airplane over western Massachusetts. 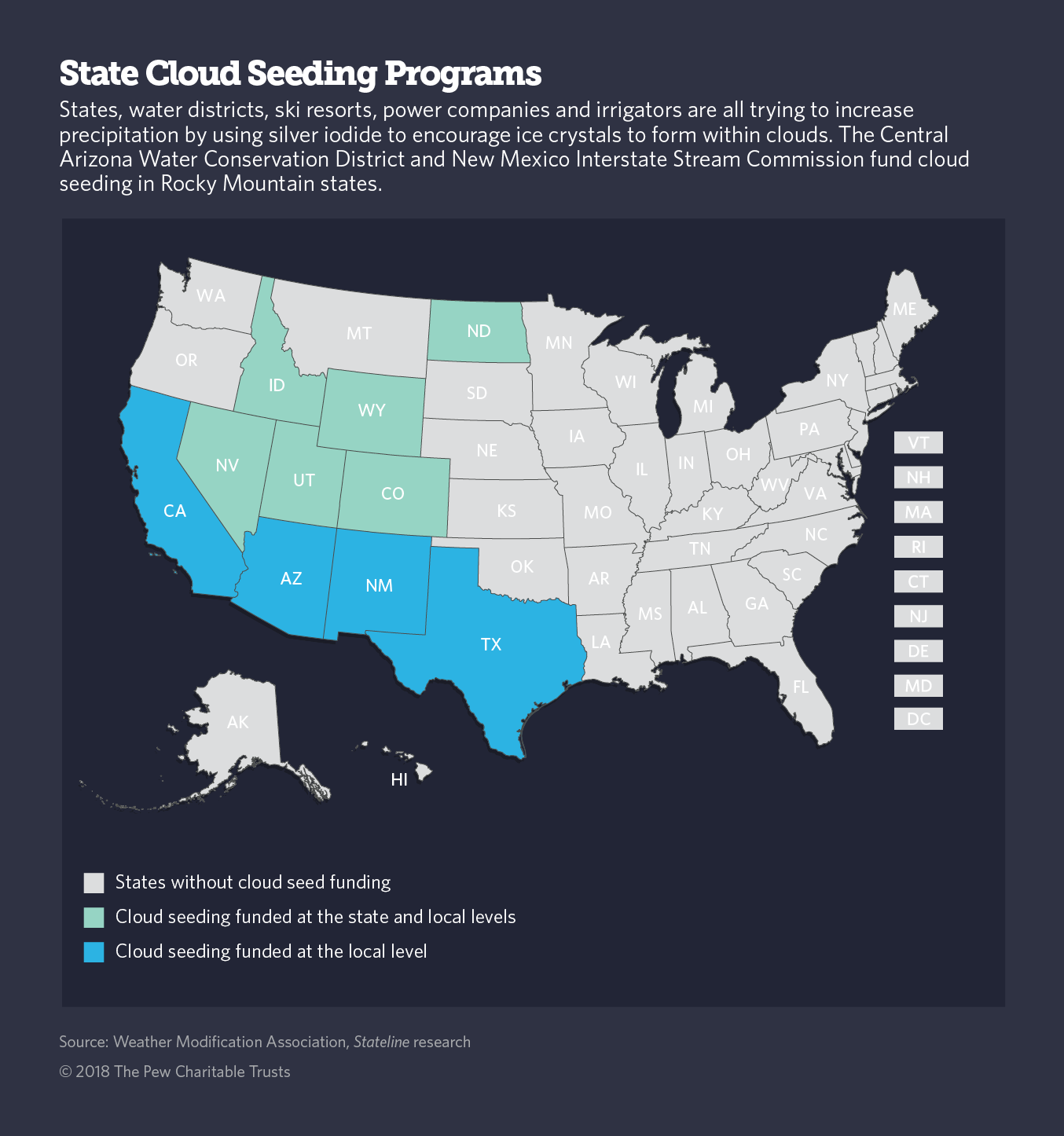 Cloud seeding machines are nothing like the “snow guns” used to blast water over ski slopes. Instead, when they’re turned on they generate smoke that floats into the air like incense. Some state programs rely on ground-based machines. Others use airplanes to drop flares that generate silver iodide smoke into clouds, or to fly into a storm with flares strapped to their wings.

The January National Science Foundation-funded study, which was conducted in Idaho, was the first to show real-world observations of silver iodide forming ice crystals inside clouds and falling out as precipitation.

Such research has increased interest in cloud seeding, particularly among private companies and utilities, said Neil Brackin, president of Weather Modification Inc., a North Dakota company that does cloud seeding. “We’re able to now really demonstrate the technology, and they can see it’s not something conceptual that works in a lab — it’s measurable.”

Other recent studies have used computer modeling to estimate the increase in snowfall from cloud seeding. A 2014 study across two Wyoming mountain ranges found that cloud seeding could increase snowfall by 5 to 15 percent — but only when the right conditions for seeding were met, or during 30 percent of snow events.

Relatively small increases still matter. “People in the western United States — we’re always water-stressed out here,” said Frank McDonough, an atmospheric scientist in Nevada who oversees the cloud seeding program at the Desert Research Institute, part of the state university system. Along the Colorado River, more water is promised to people than is available.

Nevada’s cloud seeding program can increase the snowpack by up to 10 percent, McDonough said.

Still, he said, cloud seeding programs are difficult to evaluate. “Ten percent of additional snowfall is within the natural variation of storms.”

Although it’s hard for scientists to gauge the effectiveness of cloud seeding, many water districts are willing to take a chance on the technology because cloud seeding is relatively cheap. 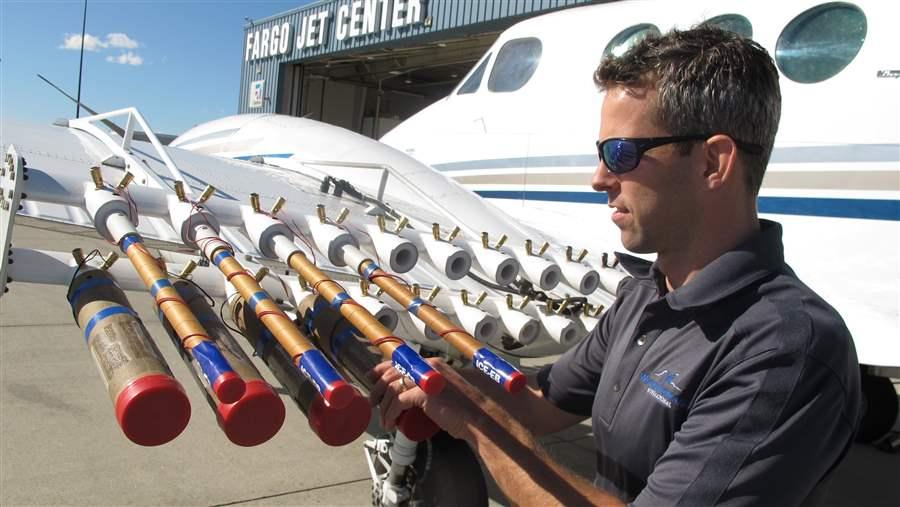 Jody Fischer, director of flight operations for Weather Modification Inc., adjusts flares for seeding on a plane outside the company headquarters in Fargo, North Dakota. Some farmers believe cloud seeding in the state is making drought conditions worse.

Idaho Power, which serves customers in Idaho and Oregon, has been using cloud seeding to boost the volume of water moving through its hydroelectric dams since 2003. The company’s representatives say the $3 million seeding program they oversee — which is partly funded by the state and other water users — generates billions of gallons of additional water for much less than 1 percent of the company’s operational budget.

“When you do the math, it turns out to be about $3.50 per acre-foot,” said Shaun Parkinson, water resources leader at Idaho Power. Renting water through a water supply bank — another way for irrigators to access more water — costs $17-21 an acre-foot, he said.

As the technology advances, cloud seeding could get even better results. In Colorado, Busto is adding more remote-controlled generators that can be driven high on a mountain, closer to clouds, and left there all winter. Currently, most cloud seeding machines in the state are installed on private property and manually operated by homeowners and farmers who are paid to turn them on when a storm comes.

Still, Busto warns that cloud seeding isn’t a cure for drought. Take this winter, which has been too warm and too dry for seeding. “We have not been able to run our cloud seeding machines because there’s been no storms coming through,” he said; the machines have only run a handful of times so far.

At a recent meeting at the Wyoming Water Development Office in Cheyenne, state engineer Patrick Tyrrell told cloud seeding company representatives and state and local officials from around the region that his team hasn’t yet found local funders, such as ski resorts, to step in to help pay for the program.

Kansas’ cloud seeding program has dwindled almost to nothing since the 1970s because of budget cuts. Nevada’s Legislature eliminated funding for cloud seeding during the 2008 budget shortfall, McDonough said. Lawmakers voted last year to resume funding.

Cloud seeding can also face public opposition. State officials who manage the programs are used to explaining the science to lawmakers, their governing boards, reporters and concerned citizens.

“Most people don’t understand the science very well, and they don’t understand who’s doing what and where,” Busto said. It’s easy to find websites and online videos dedicated to conspiracy theories, such as that cloud seeding caused last year’s hurricane and flooding in Houston, or that cloud seeding is part of a government plot that will inevitably poison all life on Earth. 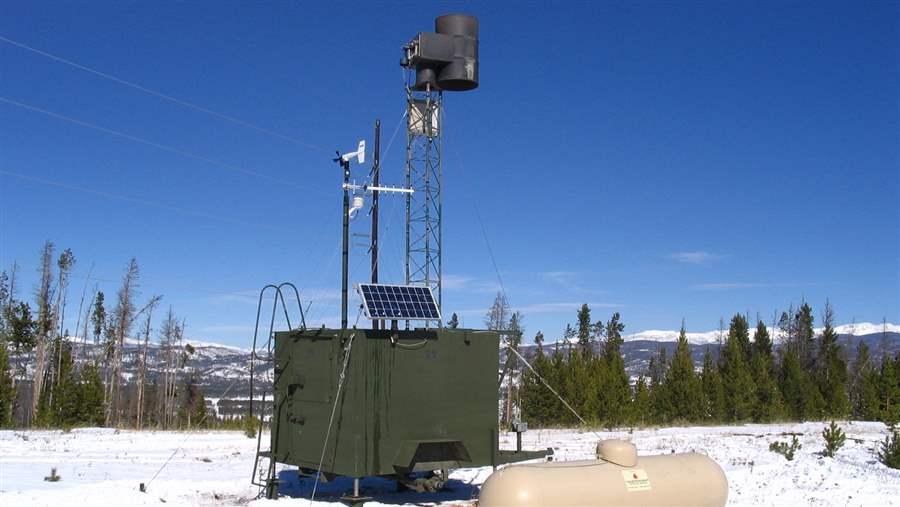 An ice nucleus generator operated by the Desert Research Institute on land owned by Denver Water, north of the Winter Park Resort. Colorado and other states use such machines to boost snowpack.

Busto said he has been confronted by people who are worried that exposure to silver iodide will make them sick. But silver is a naturally occurring element that is not inherently harmful, he said. In the 2014 Wyoming study, scientists found that seeding added some silver iodide to the surrounding water and soil but far too little to pose a known threat to human health.

North Dakota’s Kouba is one of the skeptics. He has compiled state rainfall data going back to the 1970s and concluded that cloud seeding has decreased rainfall, particularly in counties that are downwind of seeding operations. “I’m in a downwind county, and we have lost considerably,” he said.

Last summer, when a drought seized western North Dakota, Kouba circulated a petition asking the Hettinger County Commission to file an injunction against a nearby county to stop cloud seeding there. He managed to get about half the county to sign on, he said. Recently, he presented his rainfall data to the state water commission.

Busto said actual science fiction — such as “Geostorm,” a 2017 movie about malfunctioning climate control satellites — fuels misperceptions about what states are really trying to do.

“Every time something like that comes out it feeds more conspiracy theories,” he said. “I’m just trying to make more snowflakes at a ski resort.”