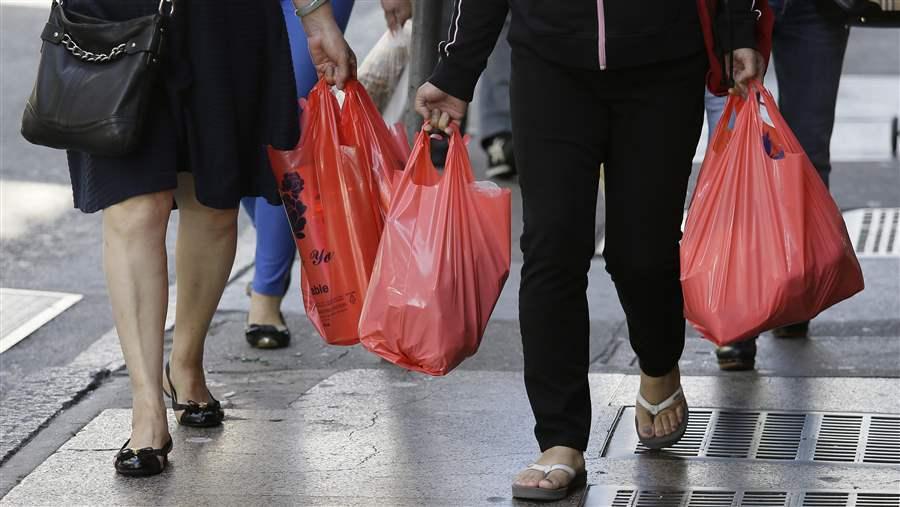 Bisbee, a city of 5,200 tucked into the mountains of southeastern Arizona, has been a haven for artists and left-leaning types since the 1970s. The old mining town has art galleries, live music venues, and stories — many of them revolving around the supposedly haunted Copper Queen Hotel — in abundance.

Until a few years ago, Bisbee also had plenty of something it didn’t want: plastic bags. They sullied the streets, helicoptered through the air and draped the cactuses, according to Mayor David M. Smith. The problem grew so dire that in 2012, the town barred retailers from providing plastic bags to customers.

Some local businesses opposed the ban, but most residents were thrilled, according to Smith. “It made a huge difference,” said the mayor, who voted for the ordinance as a member of the city council. “After, they were all gone.”

But that was just the beginning of Bisbee’s bag battle. The Arizona Food Marketing Alliance, which represents the state’s grocers and food suppliers, lobbied the Legislature for legislation that would quash Bisbee’s ban and prevent other cities and towns in Arizona from following its lead. In 2015, they succeeded.

Republican lawmakers typically tout the benefits of local control. But in states across the country, they have taken action to rein in cities that want to enact progressive measures such as gun control laws and minimum wage hikes. Now plastic bags have become an unlikely flashpoint in the conflict between blue cities and their red state legislatures.

In recent years a handful of states — Arizona and Missouri in 2015, Idaho, Michigan and Wisconsin in 2016, Minnesota in 2017 — have enacted “bans on bans,” joining a group that already included Florida, Indiana and Iowa.

State Sen. Warren Petersen, the Republican who led the push for Arizona’s law, said it is intended to protect individual rights. In addition to prohibiting plastic bag bans, the measure prohibits local governments from regulating the use of boxes, bottles and containers “used for transporting merchandise to or from a business.”

“It’s not the government’s job to tell you whether or not you should use a plastic bag,” Petersen said. “Are we going to micromanage every decision of every consumer?”

The issue also has attracted national players. The American Progressive Bag Alliance, an offshoot of the Plastics Industry Association, has spent millions of dollars to defeat the local bans and support legislation that preempts local governments from implementing them. And the American City County Exchange, an offshoot of the conservative advocacy group the American Legislative Exchange Council — better known as ALEC — has drafted model legislative language for prohibitions on bag bans.

“A patchwork of bag laws is never good for the consumer and never good for businesses,” said Matt Seaholm, executive director of the American Progressive Bag Alliance. “It should be done at the state level if it’s that important of an issue.”

In Arizona, Bisbee refused to repeal its bag ban — until last fall, when the threat of losing nearly $2 million in state aid finally forced it to relent.

“The state was basically extorting us, saying that we either had to repeal this ordinance or lose our state sharing revenues,” Smith said. “That would have literally bankrupted the city.”

San Francisco in 2007 became the first city in the United States to impose a ban on single-use plastic bags. Roughly 150 municipalities in California, including San Jose, Malibu and Santa Monica, eventually followed suit.

After a series of battles in the lower state courts, the California Supreme Court in 2011 upheld the rights of cities to ban single-use plastic bags and ruled they did not have to complete an environmental impact analysis before adopting such bans.

Buoyed by victory, supporters pushed for a statewide ban, which Democratic Gov. Jerry Brown signed into law in 2014.

But bag proponents weren’t through. In the last three months of 2014, the Progressive Bag Alliance spent over $3 million to collect enough signatures to put a reversal of the ban on the 2016 ballot. (Hilex Poly, a leading plastic bag manufacturer, contributed $1.7 million, Superbag Corporation gave $500,000, and Formosa Plastics contributed $400,000 in the successful effort.)

Then, to attract voter support for the ballot measure, the alliance spent another $2.6 million.

Still, Californians upheld the statewide ban, with 53 percent voting in favor. The ban allows stores to offer paper or reusable plastic bags for a 10 cent minimum fee, and certain businesses — like restaurants and department stores — are exempt.

Environmentalists say discarded plastic bags, in addition to being unsightly, are often eaten by animals such as fish and eventually end up in human food, which can make people sick. Citing data collected by the California Coastal Commission, a state agency, environmentalists say bag bans can go a long way toward minimizing those risks.

In 2010, volunteers picked up about 65,000 plastic bags littered along state beaches and rivers during the Coastal Commission’s annual cleanup day. Plastic bags accounted for 7.4 percent of all the items of trash collected throughout the day — the third most common item after cigarette butts and food wrappers.

“This is a big win for the coast of California and the state in general,” said Mark Vargas, a commissioner on the Coastal Commission. “And it is proof that [these bans] work.” 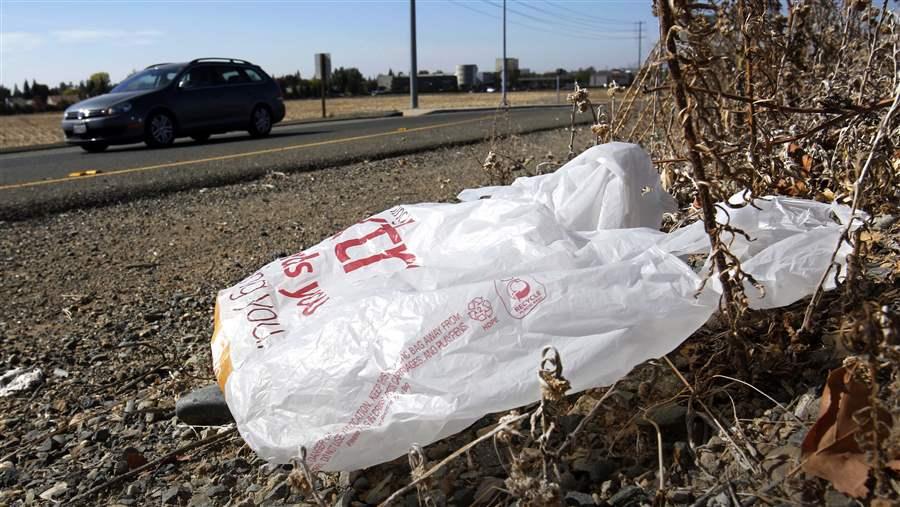 A plastic bag sits along a roadside in California, where the first statewide ban on plastic bags in the U.S. was enacted.

But opponents of plastic bag bans maintain that they do little to protect the environment — and may even harm humans.

Other bag-ban opponents argue that reusable bags pose sanitary risks. Many cite a 2013 study that found that reusable grocery bags, a common substitute for plastic bags, contain potentially harmful bacteria. The researchers found that emergency room admissions related to these bacteria spiked in San Francisco after it adopted its ban in 2007.

In Minnesota, state lawmakers acted quickly to preempt a bag ban that Minneapolis approved in spring 2016. Days before the city’s ban was slated to go into effect, state lawmakers in 2017 enacted a statewide prohibition on cities imposing bans on any type of bag in stores.

City councilman Cam Gordon, a member of the Green Party who introduced the Minneapolis ordinance, said he and other proponents of the measure met with business groups and adjusted the ban to address retailers’ concerns. He said state lawmakers were trampling on the will of the City Council and residents of Minneapolis.

“I felt disrespected by the Legislature,” Gordon said. “It was not very good democracy.”