Nestled between Amundsen Gulf and the mouth of the Hornaday River, Darnley Bay is one of the most important ecological and cultural regions in Canada’s western Arctic. Every summer, as the sea ice recedes, the bay transforms into a summer feeding ground for beluga and bowhead whales, ringed seals, and dozens of fish species, including the recently discovered blue char. During these critical spring and summer months, the coastal cliffs at Cape Parry, a headland on the northwestern side of the bay, host the only known nesting colony of thick-billed murres in Canada’s western Arctic, as well as up to 20,000 king and common eiders and long-tailed ducks.

Darnley Bay is also the traditional harvest area for the nearby community of Paulatuk, home to more than 300 Inuvialuit who rely heavily on the abundance of wildlife in its waters. The health of the community is closely tied to that of the marine environment, and protection of the bay’s beluga habitat is a top priority.

In November 2016, Canada designated part of Darnley Bay as the Anguniaqvia Niqiqyuam Marine Protected Area (MPA). (See Map 1.) Together with the existing Tarium Niryutait MPA in the Mackenzie River estuary, this new protected area will create a regional network that safeguards key summer habitat for about 28 percent, or as many as 40,000, of the world’s belugas. This is the first new MPA announced by the federal government in six years and represents another step toward fulfilling the country’s commitment to protect 5 percent of its oceans by 2017 and 10 percent by 2020. The MPA regulations will help ensure that emerging development activities—such as oil and gas exploration and commercial fishing—do not adversely affect this important marine habitat. 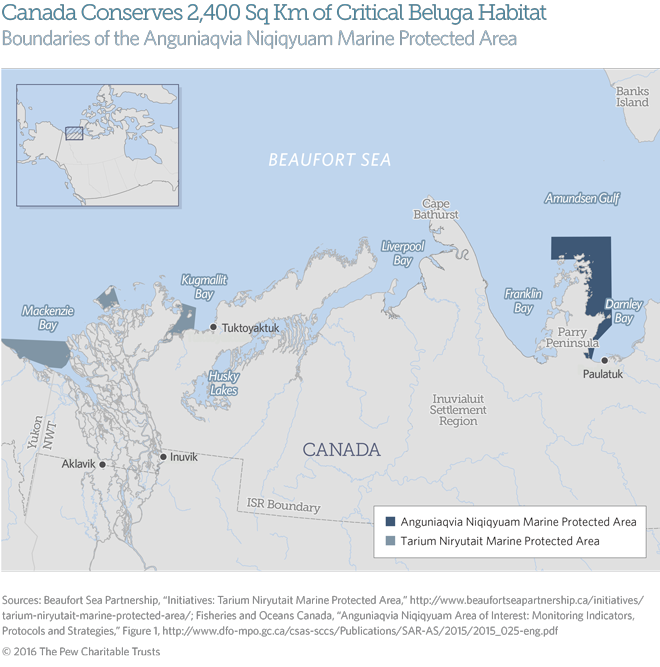 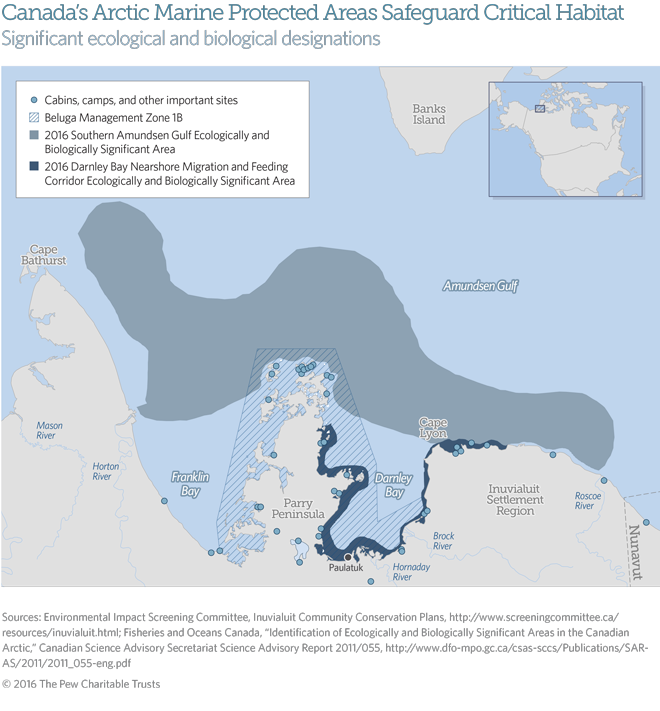 Oceans North Canada applauds the designation of this new MPA and supports future conservation efforts in this region. Map 2 shows three additional, overlapping areas the federal government and Inuvialuit organizations consider to be important for the conservation of biological abundance, diversity, and productivity. An expanded monitoring and management zone would incorporate these vital ecological areas and ensure that nearby development activities do not undermine conservation efforts. A larger MPA could also lead to additional research funds and employment for local monitors.

Inuvialuit co-management of the MPA

Effective marine conservation in the western Arctic should contribute to regional prosperity and provide meaningful benefits to local residents. The Anguniaqvia Niqiqyuam MPA provides an opportunity to implement a community-based model for managing and monitoring sensitive areas in the Arctic. Under the co-management system created by the Inuvialuit Final Agreement, Inuvialuit are well-positioned to lead in the administration, management, and monitoring of Canada’s newest MPA.

Inuvialuit traditional knowledge long ago identified Darnley Bay as an important beluga harvesting area. Since 2013, Oceans North Canada has collaborated with the Paulatuk Hunters and Trappers Committee and the Fisheries Joint Management Committee to conduct research in Darnley Bay on the presence and habitat use of beluga whales and other marine mammals. The studies use passive investigative methods, including hydrophones, remote video, and recording of local observations.

This approach has effectively combined both Inuvialuit and scientific methods, and it has provided a chance to gain additional insights into how and when belugas use the area. The research has underscored the importance of an expanded monitoring zone that includes essential habitat throughout the region and considers broader ocean uses and impacts. 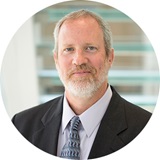