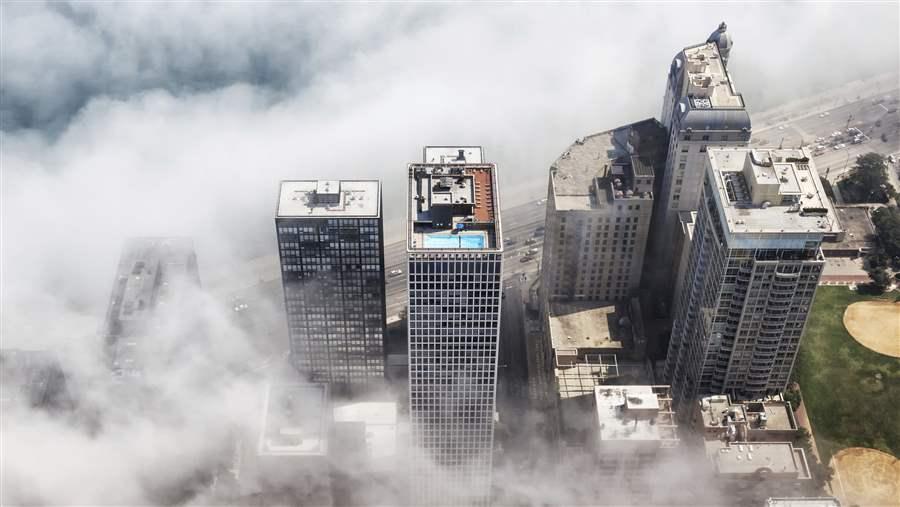 In June 2014, Illinois policymakers began laying the foundation for responsible fiscal practices with the ratification of the Illinois Revenue Volatility Study Act (S.B. 274). The law requires the state’s Commission on Government Forecasting and Accounting to perform a tax revenue volatility study that will inform development of an evidence-based rainy day fund policy for the state.

Broadly speaking, the statute requires the commission to:

Illinois faces pressing structural fiscal challenges that must be addressed before the state can begin building reserves, but policymakers recognize the need to understand volatility and develop approaches to address it. Illinois is only the third state to statutorily require a volatility study specifically intended to inform rainy day fund policy. The other two states, Utah and Minnesota, recently legislated changes to their rainy day funds reflecting lessons learned from such studies. In Utah, the size of the state’s two main reserve funds has been twice adjusted upward to reflect growing tax volatility and resulting budget uncertainty. In Minnesota, the required rainy day fund amount is set annually to reflect a measure of budget risk posed by the volatility of the state’s tax base.

Rainy day planning can begin before other fiscal challenges are addressed

Illinois continues to face substantial fiscal challenges. It has the most underfunded pension plan among the 50 states and a multibillion-dollar backlog of unpaid bills, and it lacks a true rainy day fund to smooth over the ups and downs of the economic cycle.1 As a result, Illinois has the lowest credit rating of any U.S. state, a circumstance that has driven up its borrowing costs.2

Although these problems are formidable, policymakers are thinking in the long term by considering evidence- based policies for a rainy day fund that can take effect when the state is once again in a position to save. Illinois is one of just four states that do not have rainy day funds.3  The state maintains a working cash fund to address cash flow shortages in a single fiscal year, but it does not have a fund with balances that can be accessed over multiple years to lessen the pressure associated with economic and fiscal fluctuations.

The Revenue Volatility Study Act is intended to correct this deficiency. Under the law, Illinois’ Commission on Government Forecasting and Accounting must conduct a tax volatility study, to be completed and presented to the Illinois General Assembly by the end of 2014, and provide recommendations for when, how, and how much Illinois should save during times of growth for use in leaner years.

Designing a rainy day fund for Illinois with volatility in mind

Although 46 states have rainy day funds in place, few have designed those funds with underlying economic or revenue changes in mind. The Illinois study will provide policymakers with answers to the following questions to help them better understand and manage volatility:

With this information, Illinois lawmakers can make informed decisions about how best to lessen the impact of tax revenue volatility on annual budgets and build a financial cushion that is adequate to offset future revenue declines.

Over the past 20 years, Illinois’ revenue volatility has ranked in the top half of states.4  Before the Great Recession, Illinois’ tax collections rose almost 11 percent from 2005 to 2006 and another 6 percent from 2006 to 2007,  after adjusting for changes in tax policy. But revenue dropped more than 8 percent from 2008 to 2009 and again by almost 4 percent from 2009 to 2010.5   Revenue fell in the vast majority of states during the recession, but Illinois suffered more than most because it lacked a rainy day fund to offset some of those losses.  (See Figure 1.) 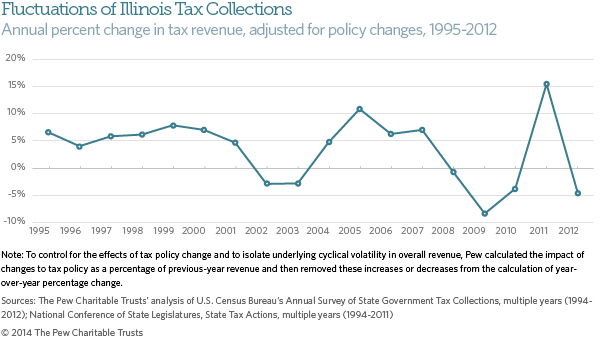 In April 2014, Standard & Poor’s noted that Illinois’ “financial flexibility will continue to be constrained without a meaningful budget stabilization or rainy-day fund.”6 The report does not define a “meaningful” fund, but S&P’s recent commentary on another state, California, where voters will consider rainy day fund changes in November, provides some insight into how rainy day fund policies are viewed in terms of states’ overall creditworthiness.

Like Illinois, California has a large population, diverse economy, and significant structural budget challenges. Both states’ revenue portfolios contain a similar mix of sources, with three-quarters or more of total revenue coming from taxes on personal income, sales, and corporate income.7  By contrast, their tax structures, which influence the volatility of each source, differ significantly. For this reason, the best rainy day fund policy for each state may be substantially different. (See Figure 2.) 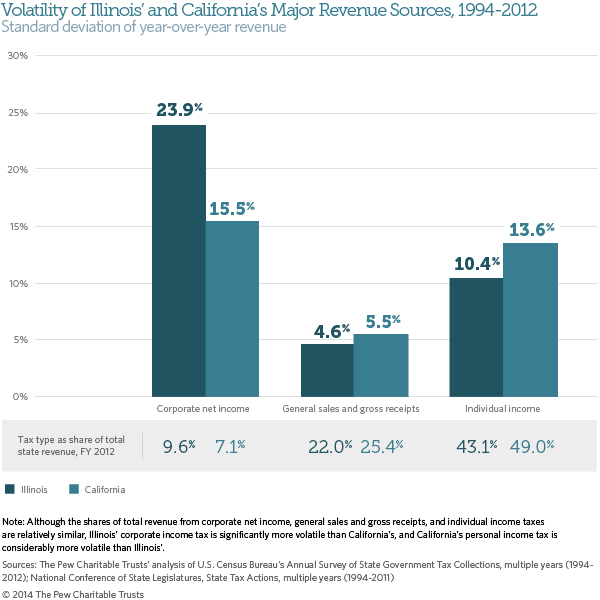 S&P recently expressed support for California’s proposal to connect fund deposit rules to revenue volatility, stating: “For state governments that are subject to balanced-budget requirements, harnessing periods of relatively stronger revenue growth to build up a reserve makes intuitive sense. In S&P’s view, states that are capable of consistently doing this are better positioned when the next revenue downturn strikes.” S&P further noted that states that have achievable savings policies score higher under its ratings criteria.8

Similarly, Kroll Bond Rating Agency notes that it verifies the degree to which states consistently fund and maintain budget reserve levels in accordance with stated policy. For Kroll, it is important that states understand their revenue sensitivities as they relate to the economy and that they fund reserve levels to account for observed volatility.9

The most effective rainy day fund policies are informed by a periodic examination of the economic and policy factors that drive state revenue volatility. By initiating their state’s rainy day fund policy discussion with a data- driven study aimed at answering critical questions that can inform policy design, Illinois policymakers are putting in place the tools needed to manage future budget uncertainty and are laying the foundation for greater financial flexibility in the future. (See Figure 3.) 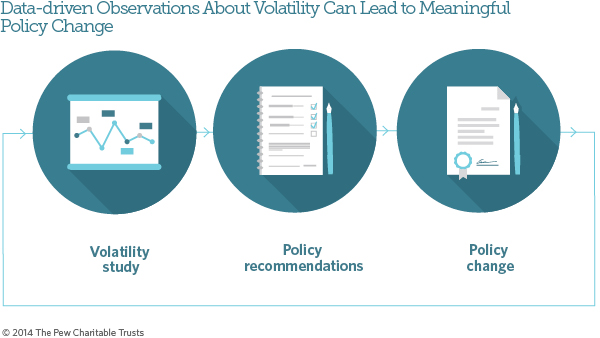