A Map of the Future of Water

Global changes are altering where and how we get fresh water, sparking the need for worldwide cooperation.

The availability of fresh water is rapidly changing all over the world, creating a tenuous future that requires attention from policymakers and the public.

We know this thanks to 14 years’ worth of satellite data collected by a unique NASA Earth-observing mission called the Gravity Recovery and Climate Experiment—which has the gratifying acronym GRACE. Unlike some satellite missions that rely on images, GRACE, which was launched in 2002 and decommissioned at the end of 2017, was more a “scale in the sky.” It measured the very tiny space-time variations in Earth’s gravity field, effectively weighing changes in water mass over large river basins and groundwater aquifers—those porous, subterranean rock and soil layers that store water that must be pumped to the surface.

As complex as that sounds, the results are actually quite simple to understand. The data quantified the rates at which all regions on Earth are gaining or losing water, allowing my colleagues and me to produce the accompanying map. And what the map shows is also simple to understand but deeply troubling: Water security—a phrase that simply means having access to sufficient quantities of safe water for our daily lives—is at a greater risk than most people realize.

We spent more than a decade studying the data and published our map and report in 2018. Perhaps the most concerning feature throughout the years of the map’s development has been persistent, distinct patterns that define emerging classes of water “haves” and “have-nots” around the world. These patterns aren’t seen in previous water maps, most of which were built from ground-based data.

For example, we found that the world’s high-latitude regions, including the northern half of the United States, as well as the global tropics, the low latitudes, are getting wetter. Simultaneously, the mid-latitudes—the arid to semiarid belt sandwiched in between—are getting drier. This pattern of wet getting wetter, dry getting drier, has long been predicted in a series of Intergovernmental Panel on Climate Change (IPCC) reports. However, IPCC-predicted changes extend through the end of the 21st century. Our latest study, and an earlier report from our team, show that it is happening now.

Ending in 2017, it measured the tiny space-time variations in Earth’s gravity field and showed that wet areas are getting wetter and dry areas are becoming drier.

2025: The projected year in which over half of the world’s population will reside in water-stressed areas. TWEET

Hot spots in which drought extremes have been intensifying at dangerously high rates are also apparent on the map. TWEET

With less than two decades of data from the GRACE mission, we cannot say conclusively that these patterns are driven by climate change. But their similarity to the patterns predicted by the IPCC is striking and should be cause for great concern.

Against this broad backdrop of high- and low-latitude wetting and mid-latitude drying, the map is dotted with numerous “hot spots”—places where rapidly increasing (deeper blue spots) or rapidly decreasing (deeper red spots) amounts of water pose major threats to human and environmental well-being in a variety of ways.

Some of the hottest of the red hot spots are located where the world’s ice sheets and mountain glaciers are steadily melting in response to rising temperatures. The Greenland and Antarctic ice sheets and the Alaskan, Patagonian, and other mountain glacier systems are disintegrating at alarming rates, pouring billions of tons of fresh water into the oceans each year, driving sea levels to dangerous new heights.

At the same time, one of the more startling findings of our work with the GRACE data concerned the water we cannot see but increasingly rely upon: groundwater. Over half of the world’s major aquifers are past sustainability tipping points, meaning that the rates at which groundwater is being withdrawn are far greater than the rates at which it is being replenished.

These aquifers appear as bright-red hot spots on the map, and they are found on every continent except Antarctica. The Central Valley and Ogallala aquifers in the U.S.; the Northwest Sahara aquifer system; across the Middle East, northwestern India, and northern Bangladesh; the North China Plain aquifer in Beijing; the Pilbara basin in northwestern Australia; and the Guarani aquifer in southern South America are all being overly exploited. These great aquifer systems are being mined, primarily for irrigation in the overlying, mega-food-producing regions of the world. This disappearance of groundwater places regional and global water and food security at increasing risk.

The changing climate is also leading to changing extremes in flooding and drought. Our map identifies where these shifts have been the most severe, and other work from our team shows that we can also quantify the rates at which these extremes are being altered. Key regions where increases in flooding have been most severe include the U.S. Upper Midwest and southern Alberta, Canada, where major flooding occurred in the Missouri River basin (2011) and Calgary (2005 and 2013); the Amazon and Orinoco River basins in South America; and the Okavango Delta in southern Africa.

Hot spots in which drought extremes have been intensifying at dangerously high rates are also apparent on the map. Key regions include California (with the 2006-10 and 2011-15 droughts) and Texas (the 2005-06, 2007-08, and 2010-15 droughts), and the 2014-17 drought in southeastern Brazil when Sao Paulo—with more than 12 million people, one of the world’s most populous cities—nearly ran out of water. There have been chronic droughts in Eastern Europe, while in the Caspian-Aral Sea region in Asia, long-term drought is drying out once great inland seas. The hardships, damage, and loss of life caused by increases to both flooding and drought can be expected to continue in these or other future hot spots if changing extremes become “the new normal” under climate change.

The shifting patterns of water availability, along with falling groundwater levels, will further limit access to drinking water and water for irrigation, presenting new socio-economic and political implications. Over 2 billion people already lack access to safe drinking water at home, and by 2025 over half of the world’s population will reside in water-stressed areas. These numbers will increase significantly if climate change and population growth follow or exceed predicted trajectories.

The disappearance of water from several hot spots on the map raises important questions: Is the world prepared for potential waves of displaced people, like those from Syria, where drought plays an important role in the conflict and the refugee crisis? How will the billions of residents across South Asia respond when disappearing glaciers and groundwater begin severely limiting the availability of fresh water and disrupting livelihoods? Will they become water refugees, and will migration be haphazard, event-driven, or managed? Are neighboring countries willing and prepared to accept potentially displaced populations?

The hardships, damage, and loss of life caused by increases to both flooding and drought can be expected to continue.

Several of the hot spots for groundwater depletion cross state or international borders, and many such regions are already prone to conflict. Will the history of water-driven conflict continue or worsen in the Middle East or along the Tunisia-Libya or India-Pakistan borders? Will China’s great thirst spark new conflict beyond its boundaries as it takes water from the Mekong River, which flows through five other nations?

Water scarcity may ultimately also limit food production. The food industry is the largest user of water worldwide, consuming far more than is available on an annual renewable basis. In fact, most of the world’s food-producing regions are in a state of chronic water scarcity, with no end in sight given current rates of production and levels of agricultural efficiency.

If most food production remains in its current, drying mid-latitude locations, it will require water imported from wetter areas. States such as California and nations such as China, India, and Argentina are already doing this or considering it. But in many places, proposals to move water from one region to produce food in another meet great resistance. In the U.S., for example, discussions to build freshwater pipelines from water-rich regions like Alaska, the Great Lakes, or the Mississippi River to food-producing regions like the Central Valley or the southern High Plains—to grow food for Americans—have always been politically charged. However, given the reality of disappearing groundwater, the next questions we face could be: Will more long-distance water transport be required to support food production in its current locations in the U.S.? Or will food production migrate to where more water is available?

The ultimate goal of sound water management is to provide a reliable supply of water of the appropriate quality for a range of needs: drinking and sanitation, food and energy production, industrial and municipal, economic growth, and environmental biodiversity. Can water managers continue to ensure reliability as the amount of water entering a region as precipitation, snowmelt, or stream flow becomes much more variable and uncertain?

Technological innovations alone will not meet the coming global water challenges. But there are areas in which we can make progress. Agriculture has great potential for water saving by improving efficiency through more precise and focused irrigation and by breeding plants for drought tolerance.

Around the world, surface water—our rivers, lakes, and reservoirs—and our groundwater must be managed jointly, as components of one interconnected water supply. Poor monitoring and management of groundwater relative to surface water, as is typical in much of the world, has resulted in its rapid disappearance. As a critical element of national and international water supplies, groundwater should be included in interstate and international transboundary water discussions.

Of course, there is also action each of us can take as individuals. We can use more efficient plumbing and reduce outdoor watering at home. And we can adjust our diet, turning to foods that require less water. A pound of beef, for example, requires roughly four times as much water to produce as a pound of chicken.

As individuals we also we must require our elected officials to commit to solving our water concerns. Fortunately, reliable scientific information exists to help guide them. The May 2018 launch of GRACE Follow-On, a continuation of the original GRACE mission, will ensure a steady flow of additional data in the years to come.

If governments, nonprofits, development banks, academic researchers, industry, and policymakers can come together, we may be able to turn our freshwater challenges into a net positive. By opening venues for discussing water policy, by sharing data, by developing new physical—and social—infrastructure, we can create a new worldwide water diplomacy that treats this universal, vitally needed resource as an inspiration for cooperation rather than conflict.

Jay Famiglietti is a professor and the executive director of the Global Institute for Water Security at the University of Saskatchewan, where he holds the Canada 150 research chair in hydrology and remote sensing.

The Water Cycle is Broken But We Can Fix It The Rediscovery of Water
About Trend Magazine
Trend is an analysis of the facts, numbers, and trends shaping the world.
Learn More
Media Contact
Felisa Klubes
Director, Communications
202.540.6460
Sign Up
Don’t miss our latest facts, findings, and survey results in The Rundown. 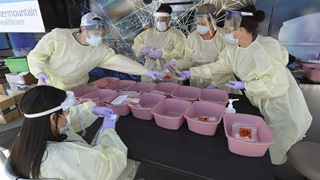 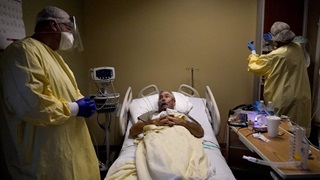