Are Today’s Young Workers Better Able to Save for Retirement?

Workers are responsible for deciding whether and how much to save, making their own investment selections in a defined contribution plan, and determining how to use their savings in retirement. If a worker chooses investments that perform poorly, for example, he or she may have limited resources when reaching retirement.

We distinguish between young workers divided into two age groups, 18-24 and 25-31, because younger workers are more likely to be finishing school or may still be gaining work experience. This allows us to better examine the role that these factors may play in the retirement outcomes examined.

This scenario helps explain the differences in terms used in the chartbook. 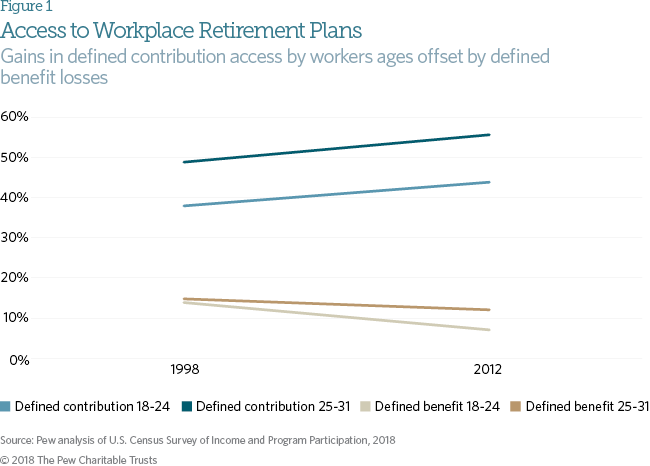 As a result of changes to the SIPP questionnaire, participation in plans from previous panels is not comparable to those in 1998 and in 2012. Still, rates of access to workplace retirement plans are helpful in understanding how the experience of young workers has changed over time. 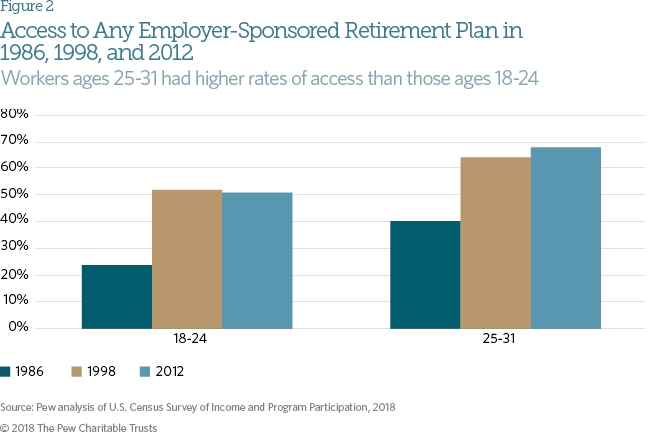 Young workers in 1986 had relatively low rates of access to any type of employer-sponsored retirement plan. Nearly a quarter of workers ages 18-24 in 1986 had access to a workplace retirement plan while this number rose to 2 in 5 workers for those ages 25-31. In later years, access to either a defined contribution or defined benefit plan was higher. However, it is impossible to attribute these differences to improvements over time because the changes to the SIPP questionnaire were likely—at least in part—to lead respondents to report higher rates of access to and participation in workplace plans. Additionally, over this period, there has been a shift from defined benefit plans to defined contribution plans that could also have led to increased access.3 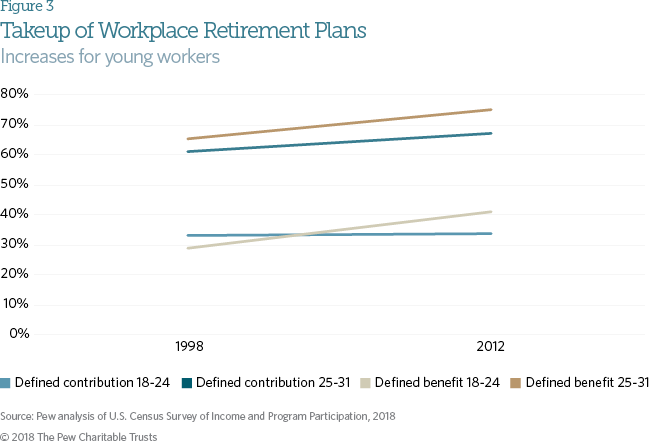 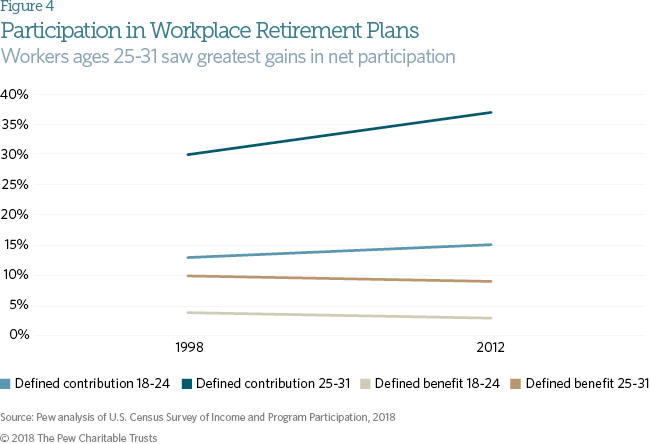 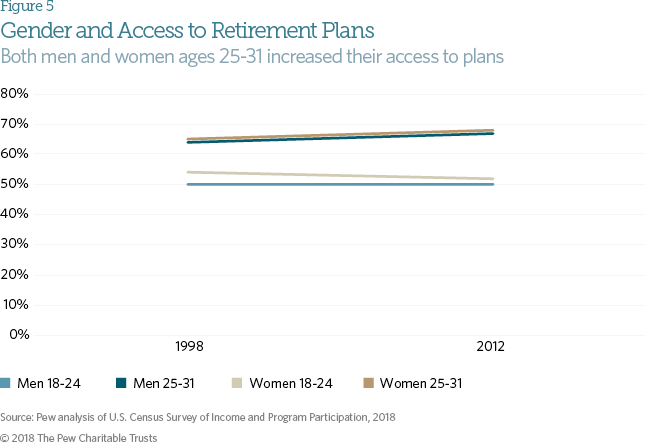 Access increased for both men and women ages 25-31; for men this improvement was significant, increasing access from 64 percent to 67 percent. Although access for women ages 18-24 dropped slightly, overall rates for ages 18-24 remained relatively stable.8 Labor force participation rates for men ages 20-24 fell by nearly 10 percentage points from 1998 to 2016, while women ages 20-24 saw declines of just over 3 percentage points during the same period.9 At least some of the decline in retirement plan access may be attributed to the decline in the demand for unskilled labor.10 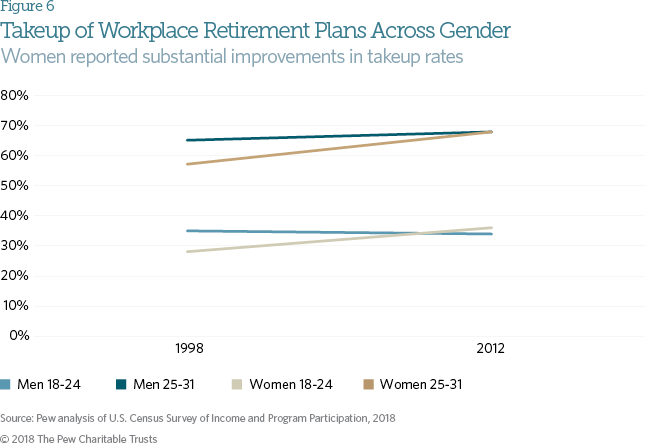 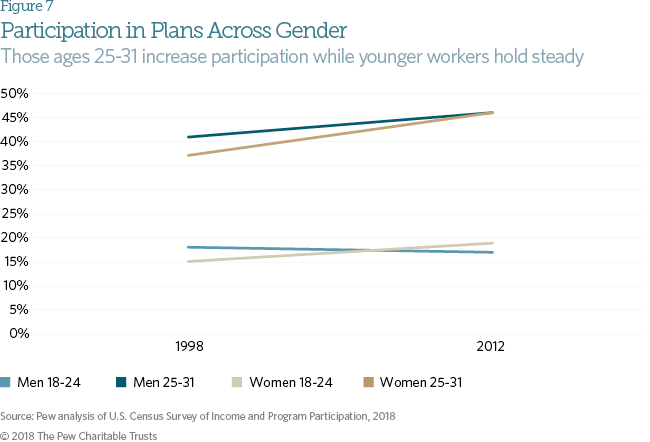 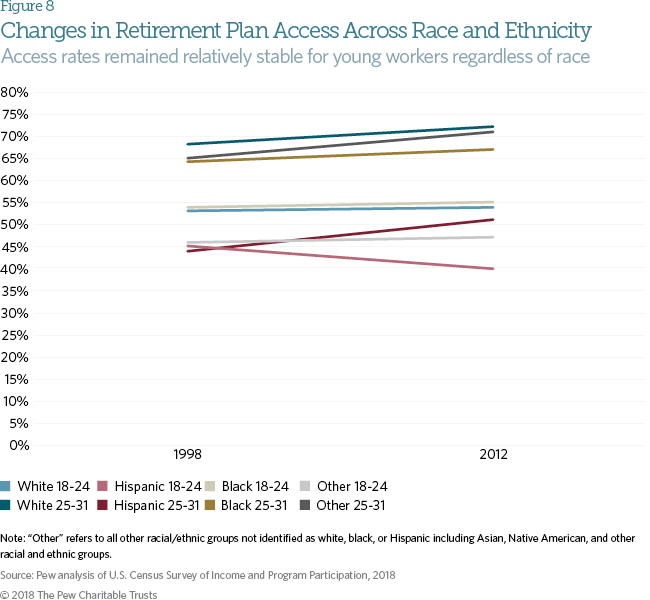 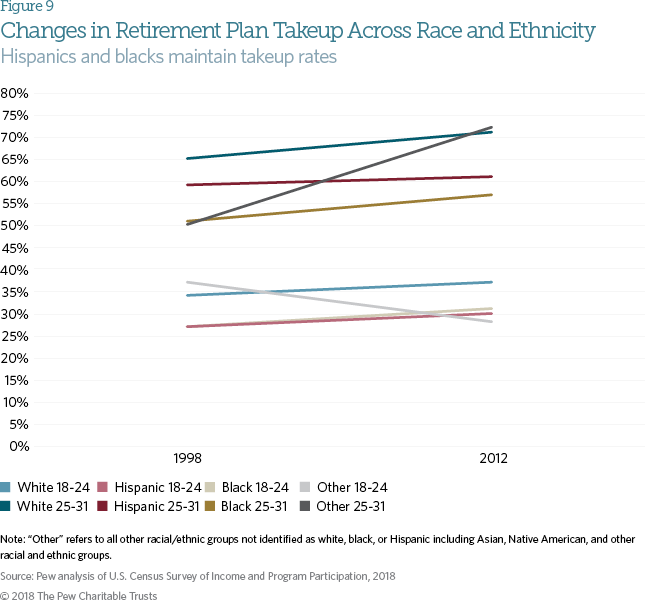 Regardless of race, workers ages 25-31 took up plans when offered at higher rates than their younger counterparts. Asians and other racial/ ethnic groups in this segment saw the largest increases in takeup rates, going from half of workers taking up plans to nearly three quarters, while their younger counterparts experienced a steep decline. Though more modest, whites and blacks also increased their takeup rates. Takeup rates for Hispanics ages 25-31 remained unchanged, though they were higher than takeup rates among blacks. Workers ages 18-24 of all races saw little improvement, while Asians and other racial/ethnic groups declined from 37 percent in 1998 to 28 percent in 2012.14 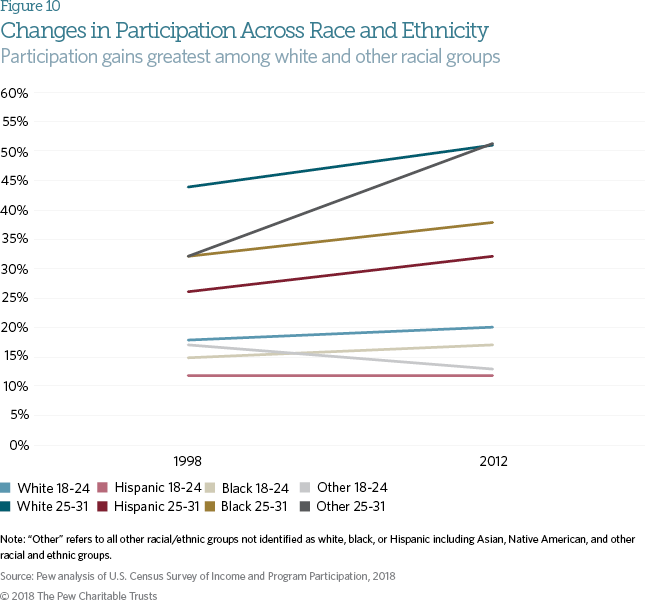 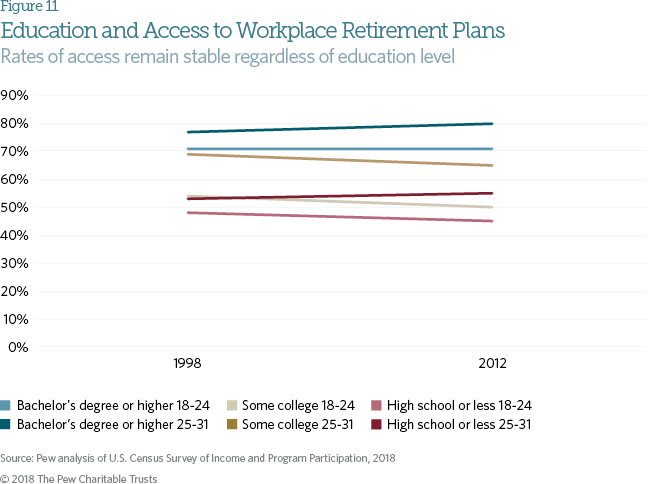 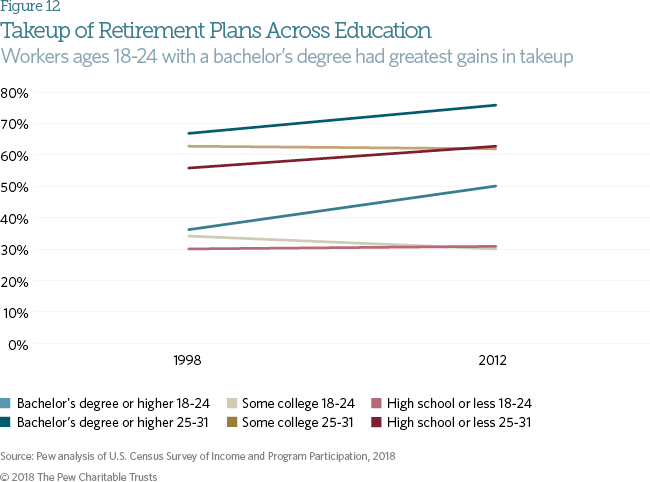 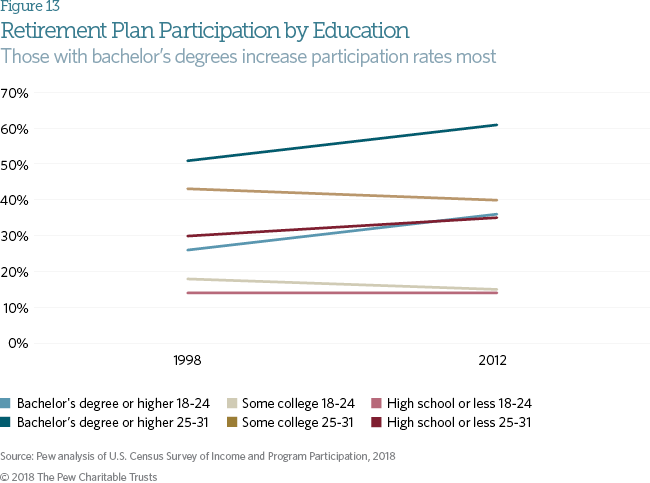 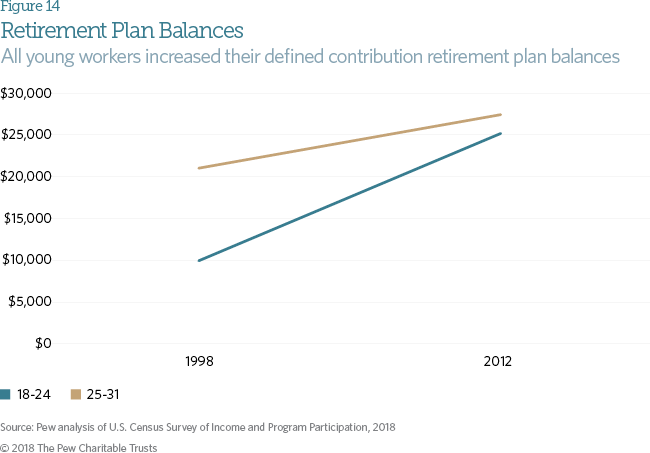 Overall young workers saw some gains in their rates of access to, takeup of, and participation in workplace retirement plans. These gains have generally been among older and more educated workers. However, younger workers ages 18-24 did have substantial gains in their plan balances, nearly equaling the average plan balance of older workers.

Unsurprisingly, younger workers had lower rates of access, takeup, and participation in workplace retirement plans. Many of these workers may still be in school or developing workplace experience and skills that will lead to increased access and participation later in life. At the same time, younger workers had limited improvement in their savings’ benchmarks from 1998 to 2012. However, the older group had marked increases in all three measures of savings. This last finding is encouraging given that, as noted above, workers bear the burden of retirement security with the demise of defined benefit pensions.

The adoption and rise of automatic enrollment is likely a factor contributing to increases in takeup and participation over time. Younger workers may see retirement as far off and a low financial priority compared to saving for a house or paying off student loans. Being automatically enrolled may overcome the inertia many young workers face in beginning to save for retirement, increasing their participation in plans and improving their long-term financial security.

This chartbook uses the most recent available retirement-related data from the U.S. Census Bureau Survey of Income and Program Participation (SIPP), a multiple cross-sectional and longitudinal study of various economic topics. Specifically, it relies on data from the Wave 11 topical module focused on retirement savings plans conducted in 2012, using participants from the 2008 panel. These data are compared to similar data from the 1996 panel using Wave 7 conducted in 1998. Data from the 1984 panel are also included.21 However, the data aren’t directly comparable to later panels due to changes in the survey questionnaire. The sample includes 18- to 31-year-old private sector full-time employees who were not self-employed, agricultural workers, or in the armed forces at the time of the survey (n = 3,613 for the 1984 panel, n = 5,807 for the 1996 panel, and n = 6,619 for the 2008 panel).22 We identify two main types of employer-sponsored retirement plans: defined benefit (in which the employer primarily contributes to the fund) and defined contribution plans (in which the employee primarily contributes to the fund). Because respondents did not explicitly state whether their employer offered either of these categories, we construct these categories based on various characteristics.23