This brief has been updated to correct “billions” to “trillions” in Figure 3.

The nation’s state-run retirement systems had a $968 billion shortfall in 2013 between pension benefits governments have promised to their workers and the funding available to meet those obligations—a $54 billion increase from the previous year.

This report focuses on the most recent comprehensive data and does not fully reflect the impact of recent strong investment returns.1 Because state retirement systems have historically accounted for investment losses and gains over time, the latest data still include losses from the 2008 Great Recession and do not fully incorporate the strong returns of recent years. As recent strong investment returns are fully realized under new accounting standards, preliminary data from 2014 point to a reduction in unfunded liabilities for the majority of states. Many states have also benefited from reforms enacted since the financial crisis.

Nevertheless, pension debt is expected to remain between $800 billion and $900 billion for state plans, which increases to more than $1 trillion when combined with the shortfalls in local pension systems, and will remain higher as a percentage of U.S. gross domestic product than at any time before the Great Recession. State and local policymakers cannot count on investment returns over the long term to close this gap and instead need to put in place funding policies that put them on track to pay down pension debt.

The annual required contribution, or ARC, that states have disclosed has been the common metric for assessing contribution adequacy, based on a minimum standard set by government accounting rules. Using plans’ own economic and demographic assumptions, the ARC calculation includes the expected cost of benefits earned for the current year and an amount to reduce some of the unfunded liability. In 2013, state pension contributions totaled $74 billion—$18 billion short of what was needed to meet the ARC—with only 24 states setting aside at least 95 percent of the ARC they determined for themselves. Overall, states that contributed at least 95 percent of the ARC from 2003 to 2013 had retirement systems that were 75 percent funded, while those that hadn’t were funded at 67 percent. But as we describe below, ARC does not always signal true fiscal health.

The Governmental Accounting Standards Board (GASB)—an independent organization recognized by governments, the accounting industry, and the capital markets as the official source of generally accepted accounting principles for state and local governments—has established standards that will provide new information on pension funds’ health for data from June 15, 2014, on.

Funding levels and contribution policies vary widely between the states and between individual plans within states. Find a detailed state-by-state view at pewtrusts.org/pensionfunding.

Four states illustrate the limitations of the ARC and why stronger measures of contribution policies may be useful. Alabama, Arizona, Tennessee, and West Virginia all contributed on average 100 percent or more of their ARC from 2003 to 2013. Tennessee and Arizona had nearly fully funded retirement systems in 2003, with 99 percent of their liabilities matched by assets. But 10 years later, while Tennessee’s pension plans remained well- funded at 94 percent, Arizona’s had steadily declined and was just 72 percent funded.

West Virginia and Alabama started from different points in 2003: West Virginia’s pension plan ranked last in the nation, while Alabama’s was in 20th place. But over the next decade, West Virginia improved its funding ratio from 40 percent to 67 percent and moved to the middle of the 50-state ranking. Meanwhile, Alabama’s ratio dropped from 93 percent to 66 percent, with 10 states outpacing it. (See Figure 1.) 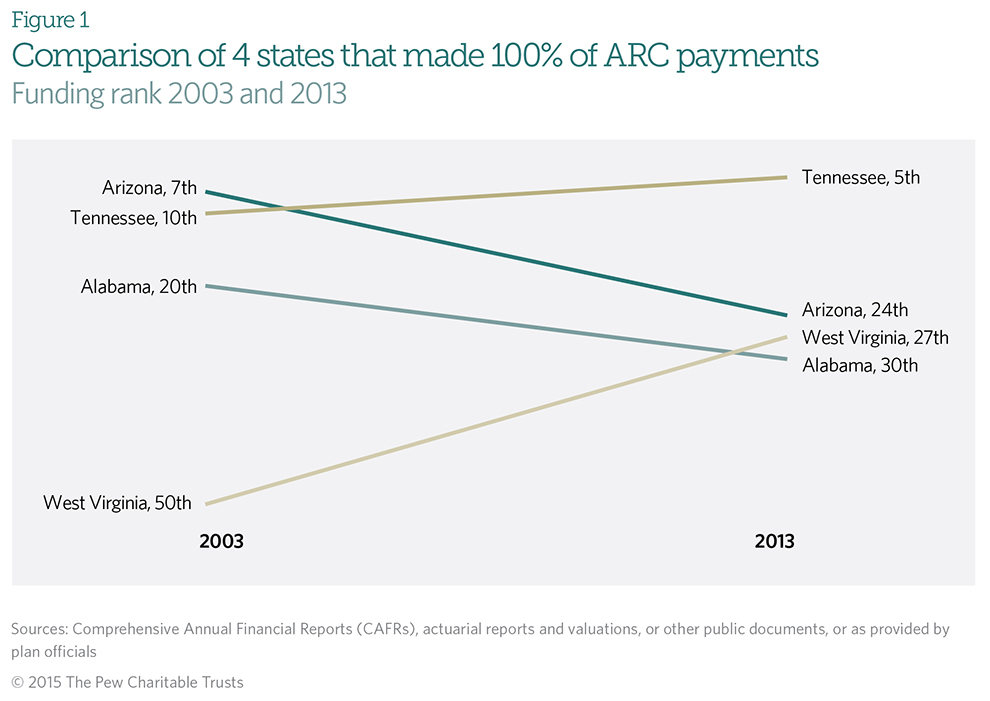 Changes to pension funding ratios are the result of multiple factors, including investment returns, benefit or cost of living modifications, adjustments to actuarial assumptions, and contribution levels. However, the differing results in the four states that are used as examples here can in part be attributed to how they adopted minimum funding standards that allowed debts to grow over time. Many state plans have stretched out their schedules to pay down their pension debts to the maximum timeframe allowable under the ARC disclosure standard and refinance each year following a funding method called 30-year open amortization. This is similar to the negative amortization loans some homeowners used in the run-up to the financial crisis. Initial payments on those loans failed to pay down any principal, and homeowners fell deeper into debt as a result.

States have a number of ways to pay off their pension debt more effectively: shorter amortization periods, recommended by the Society of Actuaries Blue Ribbon Panel, which produced a report offering best practices to the industry2.; making steady, level interest payments rather than deferring larger payments until later; and using defined payment schedules, called closed amortization periods, rather than refinancing annually. States such as Tennessee and West Virginia have succeeded in reducing their unfunded liabilities by adhering to debt payoff plans designed to close the funding gap.3 Alabama and Arizona have fallen short of this measure in the past but made recent changes to their contribution policies—specifically switching to a closed funding schedule so the current pension debt will have to be fully paid off within a fixed period—that may improve how they stand in the future.4 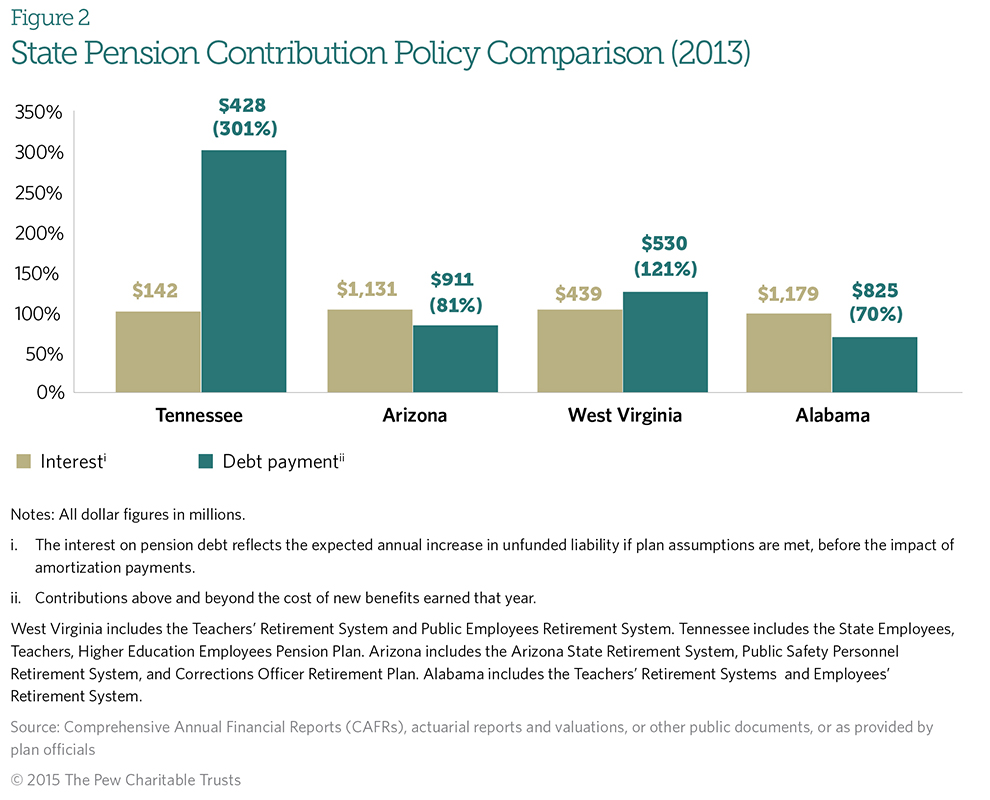 Funding policies in West Virginia and Tennessee have been designed to reduce pension debt, while policies in Arizona and Alabama have not. All four states suffered investment losses in 2009 and saw funding levels reduced, and all four experienced strong investment gains in 2014 and gained ground. But over the long run, strong contribution policies have allowed West Virginia to make substantial progress in closing its funding gap and Tennessee to make up a portion of the investment losses from the dot-com crash and the Great Recession. Funding ratios in Arizona and Alabama have declined even though they, like the other two states, paid their full ARC.

Until now, most analyses gauging public pension funding policies relied heavily on how well states made their actuarial required contributions. Starting with the reporting of 2014 data, new standards required by GASB will provide additional data that policymakers can use to supplement the ARC and to evaluate the fiscal health of plans as well as policies’ sufficiency to reduce pension debt.

Public pension plans will now be required to report liabilities using a standardized actuarial cost method, to clearly state the cost of new benefits earned that year by employees, and to disclose investment returns in a consistent fashion that allows them to be compared with other plans. In addition, for the first time, unfunded pension liabilities must be included in state and local government balance sheets and presented as net pension liabilities.

Reporting of these net liabilities will be based on the market valuation of assets rather than smoothing investment gains and losses over time, which will cause an uptick in reported funding levels in 2014 as recent strong returns are fully incorporated. It will also make direct comparisons between plans easier in the future. Standardized reporting based on market values also means that reported figures will be more volatile and that the next market downturn will cause an immediate drop in pension funding levels.

Although disclosure of ARC calculations is no longer mandatory, many plans are expected to continue to do so— or to produce a similar metric known under the new GASB standards as the “actuarially determined contribution.” The evidence shows that while the actuarial required contribution has been a useful disclosure and comparison tool, meeting this reporting standard never ensured that states and cities were actually paying down their pension debts. Because employers were essentially free to use their own assumptions and methods to calculate their ARC, it was a minimum reporting standard rather than a model approach for pension funding.6

The new disclosure requirements allow for the development of new metrics to determine whether annual pension payments are sufficient to reduce unfunded liabilities. Among them is net amortization, which measures whether funding policies in force in state and local governments are sufficient to reduce pension debt in the near term. Many states, including some that pay the full ARC, contribute less to their pension funds than the combined cost of new benefits as they are earned and interest on their pension debt—allowing their unfunded liability to grow.

The National Association of State Retirement Administrators accurately notes that net amortization may not always measure short-term funding policies that are sustainable and may reduce pension debt over the long term. That may be, but measuring net amortization builds on recent work by Moody’s7 and is consistent with the recommendation of the Society of Actuaries Blue Ribbon Panel to pay down pension debt over a fixed time period.8 As a supplement to the ARC, net amortization may be helpful in evaluating funding policies based on the annual contribution. In order to be effective, contribution policies must eventually achieve positive amortization; the net amortization measure provides an important benchmark to states and cities on when their policy will do so. 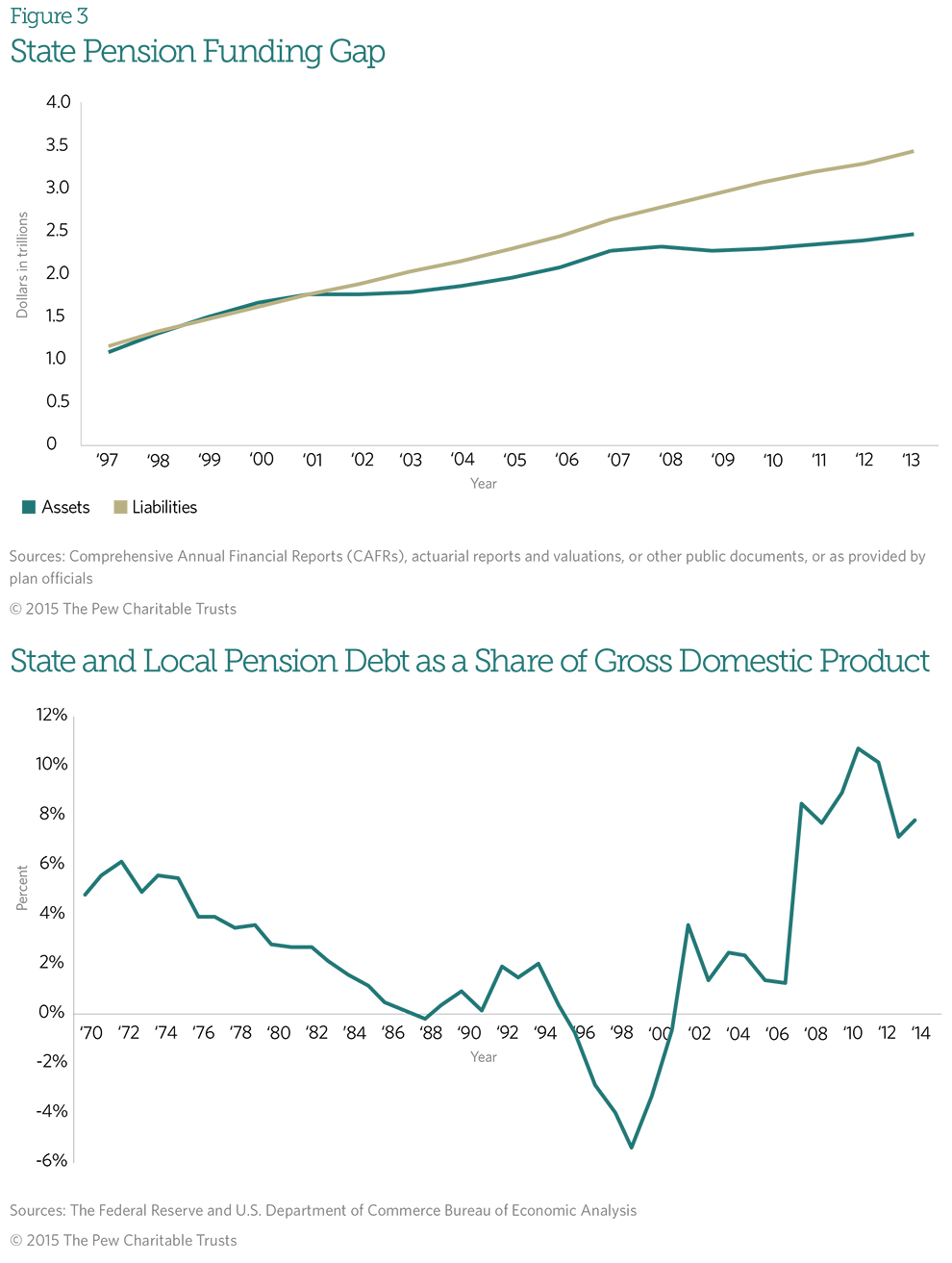 The gap between the pension benefits that state governments have promised workers and the funding to pay for them remains significant. Many states have enacted reforms in recent years and have benefited from strong investment returns. But investment returns are uncertain, and government sponsors in many states have continued to fall short of making recommended contributions in 2013. New reporting standards will provide policymakers with additional information to evaluate the effectiveness of their policies and ensure that plans can achieve full funding and that pension promises are kept over time.

All figures presented are as reported in public documents or as provided by plan officials. The main data sources used for this report were the Comprehensive Annual Financial Reports (CAFRs) produced by each state and pension plan; actuarial reports and valuations; and other state documents that disclose financial details about public employment retirement systems. In total, Pew collected data for 238 pension plans. Because of lags in financial reporting, fiscal year 2013 is the most recent year for which comprehensive data are available for all 50 states. Pew was able to obtain fiscal year 2014 data for about 90 of the 100 largest state plans.

Because each state retirement system uses different key assumptions and methods in the presentation of its financial information, Pew makes no adjustments or changes to any system in the presentation of aggregate state data. Assumptions underlying each state’s funding data include the expected rate of return on investments and estimates of employee life spans, retirement ages, salary growth, marriage rates, retention rates, and other demographic characteristics. States use various approved actuarial cost methods and also may smooth gains and losses over time to manage volatility.

Determination of retirement systems for inclusion in data collection

The pension systems included in this data collection are those listed in the state CAFR in which the state is a sponsor, administrator, employer, or funder. Local pension systems with no direct state involvement are not included.

Pew’s work on public-sector retirement systems is conducted in partnership with the Laura and John Arnold Foundation.