The ocean covers nearly three-quarters of the planet and plays an essential role in supporting life on Earth. Its waters help regulate global chemistry and climate, and are home to over 2 million species, many of which still await discovery.1 This rich biodiversity enhances the fisheries that provide food for more than 4 billion people.2

As the human impact on the ocean intensifies, critical ecosystem benefits are being lost. Currents carry millions of tons of plastics and other debris from the shore into open waters, where the waste harms marine life and changes the way healthy ecosystems function.3 Fishing also takes a toll. Worldwide, 4 million open-sea vessels catch more than 80 million metric tons of fish every year,4 which has led to the global decline of marine fisheries. Today, 90 percent of stocks are fully exploited or overexploited.5 New fishing technologies, such as massive steel deep-sea bottom trawls and sonar- and GPS-equipped fish aggregating devices, also degrade important ocean habitats and increase the amount of unintended catch, known as bycatch. The effects of rising atmospheric carbon dioxide, such as rising ocean temperatures and increasingly acidic waters, further compound the stress on marine ecosystems.

Large, fully protected marine reserves are a key tool for addressing many challenges to ocean health. These reserves protect ocean areas from human activities, such as large-scale fishing, extraction of natural resources, and other destructive uses. And that helps conserve species, habitats, and ecosystem processes. To date, however, about 2 percent of the world’s ocean has been designated as fully protected marine reserves. Leading scientists strongly recommend that at least 30 percent be fully protected.6 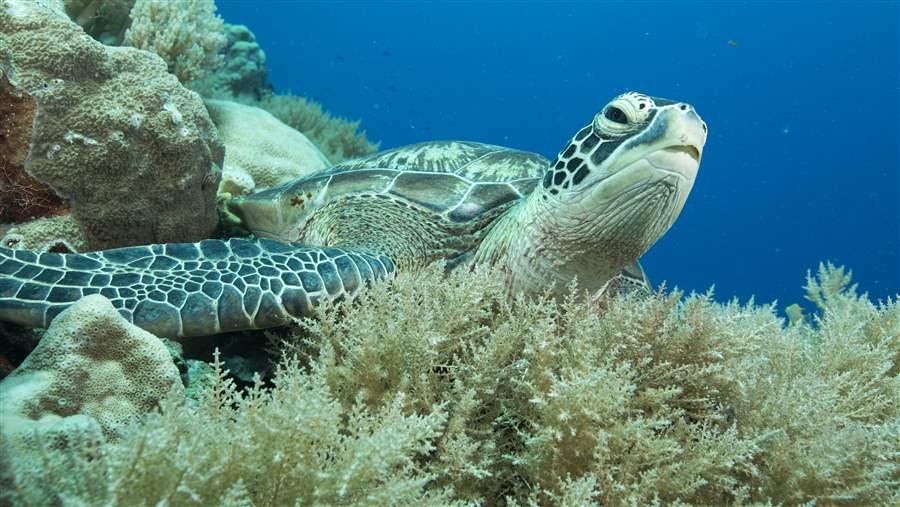 A 2014 study found that human activity has a cumulative impact on ocean ecosystems and that marine reserves yield the greatest conservation benefits when they are large, highly protected, isolated, well-enforced, and long-standing. The benefits increase dramatically when all five features are in place. For example, marine protected areas with all of these characteristics have 14 times as much shark biomass (the total amount of marine life), twice as many large fish, and five times as much fish biomass as unprotected areas. In comparison, marine protected areas with only one or two of these characteristics were largely indistinguishable from fished areas.7

Large, fully protected marine reserves help protect ocean life. They are by no means the sole solution for all that plagues marine systems, but they do benefit ecosystems by:

Negative impacts touch every part of the ocean, but the harm can be reversed. Large, fully protected marine reserves can help conserve biodiversity and valuable habitats, factors critical to maintaining ecosystem function and buffering against environmental change. These reserves can also bring far-reaching and long-term economic growth to local economies and safeguard the unique and important traditions of cultures around the world that are historically tied to the seas.