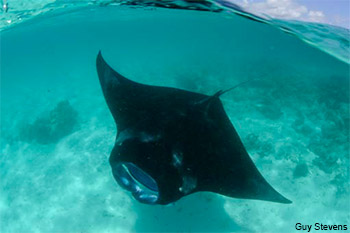 The oceanic manta (Manta birostris) and the reef manta rays (M. alfredi) are among the ocean's most charismatic wildlife. Manta rays are typically found in tropical and subtropical waters, although oceanic manta rays can be found in temperate waters. With oceanic and reef mantas reaching up to 9 meters and 5 meters, respectively, these gentle giants have enormous ecotourism value.

Manta rays are assessed on the International Union for the Conservation of Nature (IUCN) Red List of Threatened Species as Vulnerable globally. Manta rays bear only one pup on average every two to three years, which makes them highly vulnerable to overexploitation. They are killed as bycatch and in targeted fisheries throughout the Atlantic, Pacific, and Indian Oceans. In recent years, manta ray fishing has expanded in many places throughout their range, primarily in response to the emerging international market for their gill plates.

Manta ray gill plates, which are sold in some Asian markets in a tonic with purported health benefi ts, are the part most valued in international trade, with cartilage and skins of lesser importance.31 Population depletion for oceanic and reef mantas is high in several regions, with declines by more than 85 percent of the population baseline. Alarmingly, enormous local declines have occurred over one generation or less in areas with targeted fi sheries. For example, annual landings of manta rays in Indonesia declined by 56 percent in nine years. In Mozambique, sightings of Manta alfredi declined by 86 percent during eight years in which the fishery expanded.

The top three manta fishing countries—Indonesia, Sri Lanka, and India—account for an estimated 90 percent of the world's manta catch and target mantas for their gill plates. Commerce in gill plates is not well-documented, although an estimate of the total volume of the gill plate trade has been produced from an analysis of market surveys in the major manta ray gill plate markets: Guangzhou, Hong Kong, and Macau in China, as well as Singapore, with an estimated 99 percent of the market based in Guangzhou. These surveys estimated the annual volume of gill plate sales as about 21,000 kilograms (46,300 pounds) of dried manta ray gill plates and representing an estimated 4,652 manta rays. Virtually no management exists of the international trade in manta products.

Several countries—including Ecuador, the Maldives, Mexico, New Zealand, and the Philippines—have put in place domestic measures to protect manta rays. In addition, the oceanic manta was listed in Appendixes I and II of the Convention on the Conservation of Migratory Species of Wild Animals (CMS) in 2011. This means that the 116 Parties to the CMS are required to work to enforce strict protections for these animals, including a prohibition on take, as well as to conserve or restore the habitats in which they live, mitigate obstacles to migration, and control other factors that might further endanger the species. Despite the fact that mantas are caught as bycatch in some regional fi sheries management organization (RFMO) fisheries, no RFMO has adopted measures to specifi cally protect or regulate landings of manta.

Although a number of countries, including Parties to the CMS, have started to take steps to address the decline in manta ray populations, these measures do not regulate international trade in manta products, do not have the global reach of CITES, and often cover only one of the two described species of manta. An Appendix II listing for the genus Manta is necessary to ensure that international trade does not continue to threaten the survival of these species.

A proposal to include the genus Manta in CITES Appendix II was submitted for consideration at the 16th meeting of the Conference of the Parties (CoP16) in 2013, by Brazil, Colombia and Ecuador. It is clear from recent assessments that populations are severely depleted and that international trade is driving the declines. An Appendix II listing would regulate international trade to ensure it is sustainable and legal, and would thus help populations to recover from decline.