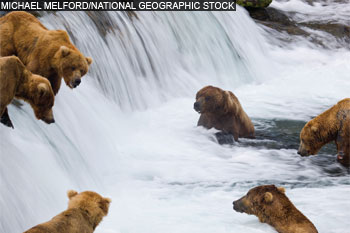 In the coming months, the Obama administration will determine whether a colossal open pit gold and copper mineral excavation project, known as Pebble Mine, can be built in the biologically rich and remote wild lands of Southwest Alaska's Bristol Bay watershed. This pristine system of rivers and lakes supports the world's largest wild salmon runs and the brown bears and bald eagles that feed on them. The watershed also serves as critical habitat for moose, lynx, wolverines, and black bears and the greater Bristol Bay region is a globally significant area for waterfowl, seabirds, and shorebirds.

Bristol Bay and surrounding coastal waters are inhabited by species like Pacific walrus and Beluga whales. This interconnected ecosystem starts inland in the area's remarkable mountains, meadows, lakes, and headwaters, which support a subsistence-based way of life for Alaska Natives as well as world-class sport and commercial fishing.
Within the watersheds that drain into Bristol Bay there are 27 globally important bird areas. Also in the region are 2 national parks, 1 national monument, 4 national wildlife refuges, and several state parks and critical habitat areas.

This same area has attracted serious mineral exploration that would put its bounty in jeopardy. The proposed Pebble Mine is expected to be so massive that it would be visible from outer space. The project is backed by the world's second-largest multinational mining corporation, London-based Anglo American, and Northern Dynasty Minerals, a Canadian mining company.

Industry data indicate that Pebble's footprint could span 32 square miles of ecologically rich land and water—an area 50 percent larger than Manhattan. It would likely include an open pit seven times deeper than the Washington Monument with structures as high as Hoover Dam to contain an estimated 7 billion to 10 billion tons of contaminated tailings permanently. It would require 86 miles of roads, slurry pipelines, and heavy-duty truck traffic as well as power plants and a deep water port in one of the world's most biologically rich areas.

Because the Pebble Mine would be located on state land, primary permitting authority lies with the Alaska Department of Natural Resources. However, the federal Clean Water Act requires a wetland fill permit from the U.S. Army Corps of Engineers before the mine can be developed. Further, the Clean Water Act gives the Environmental Protection Agency (EPA) the responsibility of determining if discharges of dredged or fill material would adversely impact municipal water supplies, shellfish beds and fisheries, wildlife, or recreational areas. This “veto authority” can be used by EPA while a permit is being considered, after it is issued, or prior to a permit application being submitted.

In 2009, the Bristol Bay Native Corporation and nine Alaska native tribes called on the EPA to declare the watershed area off limits for mine waste disposal, thereby preemptively denying the federal wetland fill permit. EPA responded by initiating an ecological assessment of the Bristol Bay watershed to better inform any permit decision they make in the future. The agency confirmed that the region's rich biodiversity justifies rigorous review of the impact of the proposed Pebble Mine as well as other possible mining operations that could turn the area into an industrial district. EPA's assessment considers impacts to native cultures and the roughly $480 million in economic activity generated each year by the region's fishing and tourism. 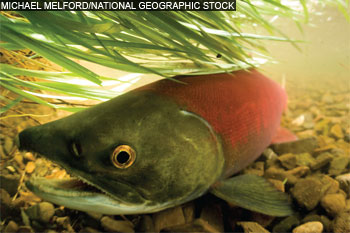 The EPA released a preliminary assessment in May 2012, which stated that “mining at this scale would cause the loss of spawning and rearing habitat for multiple species of anadromous and resident fish.” The mine—even if it operates according to the highest of the industry's standards—could be expected to eliminate or block 55 to 87 miles of salmon streams and destroy roughly 4,000 acres of wetlands, habitat for salmon and other fish. In addition, the EPA concluded:

The draft has undergone extensive public and expert review, including hearings in Alaska and a 60-day public comment period. The agency received more than 230,000 public comments, and has committed to incorporate responses from scientific peer review teams into the final draft assessment.

The implications of siting what could be the world's largest mining complex within Bristol Bay's world-class salmon fishery have raised concerns from prominent individuals and groups. According to the EPA, “well over” 90 percent of those who submitted official comments on the draft assessment to the agency oppose the mine.6 While the State of Alaska is aggressively pushing Pebble's development, the number of notable Alaskans who do not favor the project is significant. This list includes officials from the Bristol Bay Native Corporation and multiple Alaska Native tribal governments, former Governors Tony Knowles and Jay Hammond, former Alaska State Senate President Rick Halford, the commercial fishing industry and seafood producers, including the United Fishermen of Alaska, Alaska Independent Fishermen's Marketing Association, and Bristol Bay Regional Development Corporation. At the national level, hunting and fishing groups, outdoor equipment manufacturers and retailers, the $670 billion food marketing industry, and some of the nation's most respected scientists have raised concerns. Major jewelers, including Tiffany & Company and the Zales Corporation, have pledged not to purchase gold from the mine if it is constructed.

The EPA is expected to issue a final report on its assessment in early 2013. Its findings will provide the foundation for the Obama administration to determine whether Bristol Bay, with its remarkable wildlife, world class salmon runs, and fisheries- and subsistence-based culture, is an appropriate place for what could be one of the largest open pit mines on Earth.