In addition, state utilities have just begun to cope with how to regulate the power supplied by the chargers by setting cost per kilowatt, peak charges and subsidies.

"We are short on charging infrastructure across the board in every state, even the states that are doing better. We are all playing catch up."

California has the most charging stations — more than 22,600 (some with multiple outlets) at last count in May by the website evadoption.com, which tracks electric vehicle issues. The state also has the most electric vehicles, approaching half a million. But North Dakota has 36 charging locations and Alaska 26.

A Regional Push to Clean Up Cars, Trucks and Mass Transit

A Regional Push to Clean Up Cars, Trucks and Mass Transit

Transportation accounts for 40 percent of carbon emissions in the Northeast and Mid-Atlantic.

A survey for Volvo conducted in 2018 by the Harris polling firm showed that the No. 1 barrier to buying an electric vehicle was running out of power (58%), followed by low availability of charging stations (49%). And more charging stations was the No. 1 factor that would increase respondents’ likelihood of buying.

States utility boards face questions on how to regulate charging stations, including how to set the price drivers must pay.

As the revenue from gasoline taxes decreases with the rise of fuel-efficient vehicles, many states are looking for alternative sources of money to build and maintain their roads, bridges and other infrastructure.

One model for charging for electricity involves so-called demand charges, which calculates the amount of electricity used in 15-minute increments. But high demand charges make fast-charging stations in places like malls and grocery stores costly and impractical, according to a report from the nonprofit Rocky Mountain Institute.

One of the biggest pushes for electric vehicles came with the 2017 Volkswagen pollution settlement, under which the car company settled with the federal government for violating emissions laws. The settlement allowed states to allocate up to 15% of their share of the nearly $3 billion Environmental Mitigation Trust from the Volkswagen payout to electric vehicle infrastructure.

States can spend as much as 15 percent of their payout to subsidize construction of public charging stations for electric cars.

The consumer group USPIRG in a May report ranked the states on how they used the Volkswagen money for electric car infrastructure in the three years since the settlement. The group gave Washington state and Hawaii an A-plus. Rhode Island and Vermont got As; and California, Massachusetts and New York got Bs.

California also requires automakers to sell a certain number of electric (or hydrogen powered) vehicles in the state, under its “zero emission vehicle” program. The exact number is based on how many vehicles the automaker sells overall in California. That program has been copied in 10 states: Connecticut, Colorado, Maine, Maryland, Massachusetts, Oregon, New Jersey, New York, Rhode Island and Vermont.

But isn’t it a “chicken and egg” question of whether chargers come first and then more vehicles — or more vehicles demanding places to charge up?

Opponents say utility-built charging stations make all consumers pay for a service only a few relatively affluent people will use. Proponents say utilities can direct service to low-income areas that would not be served by private industry. 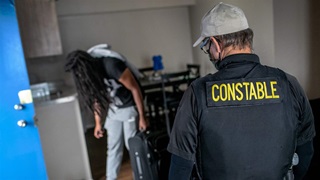 Preparing for An Eviction Surge Once Moratorium Ends