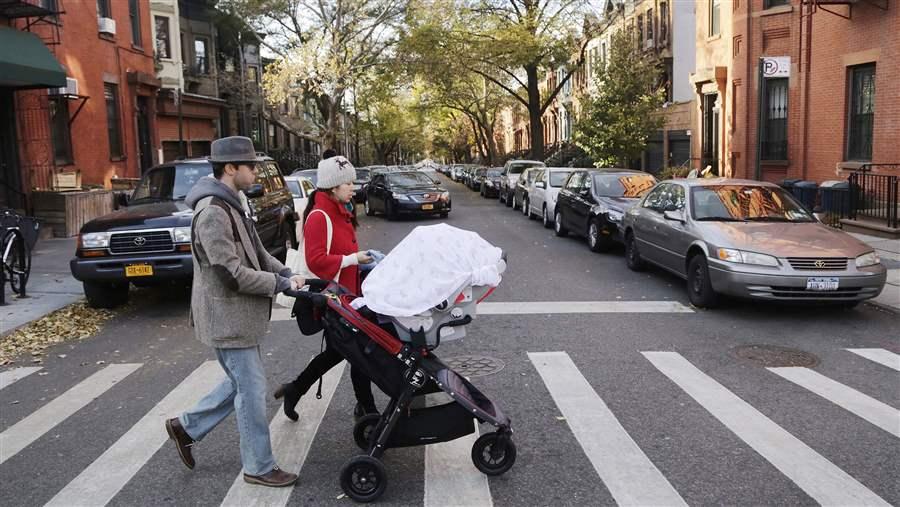 A couple with a baby stroller cross the street in the Park Slope neighborhood of Brooklyn. Between 2016 and 2017, about 51,000 more people moved out of the New York City borough than moved in.

The high cost of housing seemed to sap Americans’ taste for coastal cities last year as cities in Texas and Arizona gained more population than New York City or Los Angeles for the first time in a decade, according to census population estimates released today.

“What started as a promising decade for big cities is starting to crumble a little bit for them,” said William Frey, a demographer at the Brookings Institution, in an email. “The Great Recession put the brakes on dispersal to small metro areas, suburbs and the Sun Belt; but those trends are beginning to resume again.”

It was the first time since 2007 that New York City did not lead the pack in population growth. That year, New Orleans added almost 39,000 residents as people started going back home after Hurricane Katrina.

The last time a Texas city had the largest population surge was in 2006, when Houston — a major destination for Katrina evacuees — added about 43,000 people.

One factor, based on earlier census releases, is that more people have been moving out of New York City and Los Angeles, making it harder for those cities to maintain population growth just through births and immigration. By contrast, people continue to move into more affordable cities like San Antonio and Phoenix.

New York City’s overall population grew slightly between 2016 and 2017, but 143,000 more people moved out than moved in. Brooklyn accounted for more than a third of that loss, with about 51,000 more moving out than moving in. During the same period, Phoenix’s Maricopa County attracted more than 39,000 new residents and San Antonio’s Bexar County added 10,000. (Numbers on movers are available by county, not by city).

The high and rising cost of living in coastal metropolises seems to be playing a role. The typical Los Angeles or New York City homeowner, for example, spends close to 30 percent of her income on mortgage and taxes, compared with about 22 percent in San Antonio and Phoenix.

In Brooklyn, the only New York City borough to lose population last year, housing investors have driven away first-time buyers by snapping up the remaining affordable housing, according to an April report from the Center for NYC Neighborhoods, a public-private partnership that promotes affordable housing.

“Investors are able to beat out first-time homebuyers for whom East New York and Cypress Hills’ modest two-story houses have traditionally been entry points to homeownership,” the report said, referring to two neighborhoods in Brooklyn.

Meanwhile San Antonio’s burgeoning population is causing traffic congestion. But Keith Phillips, an economist and assistant vice president of the San Antonio Federal Reserve, said that home prices well below state and national averages have been attracting companies and retirees. 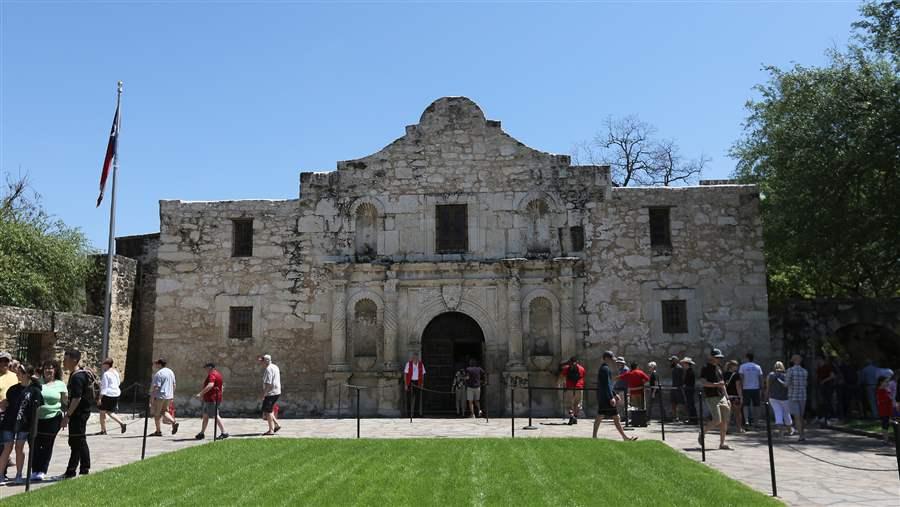 Tourists visit the Alamo in downtown San Antonio, the U.S. city with the largest increase in population from 2016 to 2017, according to new data from the U.S. Census Bureau.

Population growth slowed in most cities of more than a million people, except San Antonio and Philadelphia.

For the second year in a row, Baltimore lost more people than any city, about 5,000. Also losing population were St. Louis, Chicago, Anchorage and Pittsburgh.

Opportunity as well as affordability may be spreading to smaller towns, recent county population data shows. Cities with between 20,000 and 30,000 residents saw increasing rates of population growth for the third straight year, adding 104,000 people as a group from 2016 to 2017.

Texas cities dominated the list of those gaining the most population from 2016 to 2017.

In addition to San Antonio, Dallas and Fort Worth were in the top five, along with Phoenix and Los Angeles.

Houston, still recovering from storm floods, eked out an increase of about 8,000 people, about 1,000 more than New York City. Both cities fell out of the top 20 after years near the top.