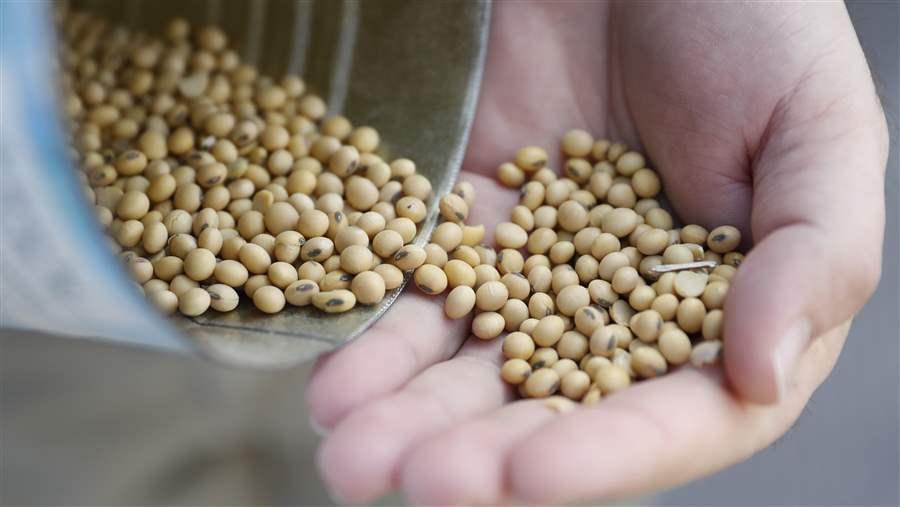 A grain salesman displays soybeans in Greenville, Ohio. The threat of Chinese tariffs has led some buyers to cancel their orders.

Perhaps no group of U.S. farmers has more to lose from a trade war with China than soybean growers.

This planting season, the farmers have been watching the headlines as carefully as the weather, hoping that China won’t act on its threat to impose a 25 percent tariff on U.S. imports and thus restrict access to the largest soybean market in the world.

President Donald Trump, who once tweeted “trade wars are good, and easy to win,” has shown that he’s willing to step to the brink of one. So has Chinese President Xi Jinping, whose government has countered American tariff threats with threats of its own.

Midwestern farmers breathed a sigh of relief this week, when Chinese trade negotiators in Washington agreed to suspend tariffs and increase purchases of U.S. agricultural products. But the negotiations have yet to produce concrete commitments, and the trade fight is likely to continue.

“I’m excited, but cautiously excited,” said John Heisdorffer, a farmer in southeast Iowa and president of the American Soybean Association.

With farm incomes projected to drop this year to the lowest level since 2002, farmers say they’re especially vulnerable to market tremors. “Everyone’s at break-even or in the red, and any little thing like this can make you apprehensive,” Heisdorffer said of the trade spat.

Soybean farmers haven’t been hit hard by the trade tensions yet. Soybean prices fell when China threatened a tariff but later stabilized. Midwestern farmers don’t typically sell many beans in the spring, anyway.

But a soybean tariff could have a big impact, more so than a 25 percent tariff on pork that China imposed in April and farmers say is already affecting prices. “There are animals that we’ve marketed that we’ve lost money on,” said Bill Shipley, the president of the board of the Iowa Soybean Association and a farmer who grows soy and raises pigs.

While U.S. Treasury Secretary Steven Mnuchin said Monday that both the United States and China have agreed to suspend tariffs, it wasn’t clear what tariffs would be suspended and when. And the long-term impact on farmers remains to be seen.

Some analysts and economists say it’s hard to tease out tariffs from larger market forces, such as an abundance of pork in China that’s depressing demand for both pork and soybean-derived animal feed.

Trump boasted in a tweet Monday that U.S. farmers would see their exports increase. “China has agreed to buy massive amounts of ADDITIONAL Farm/Agricultural Products - would be one of the best things to happen to our farmers in many years!”

Trade negotiators released a vague statement saying that China would “significantly increase purchases” of U.S. goods and services but didn’t specify a dollar amount, time period, or types of products.

This year American farmers are expected to plant more acres of soybeans than corn for the first time in decades. Almost two-thirds of beans exported in recent years have been shipped to China, where soybeans are used in animal feed and cooking oil.

Analysts expected soybeans to be one of the biggest victims of the escalating trade fight.

Purdue University estimated that a Chinese tariff on U.S. soybeans could mean economic losses of between $1.7 billion and $3.3 billion a year. 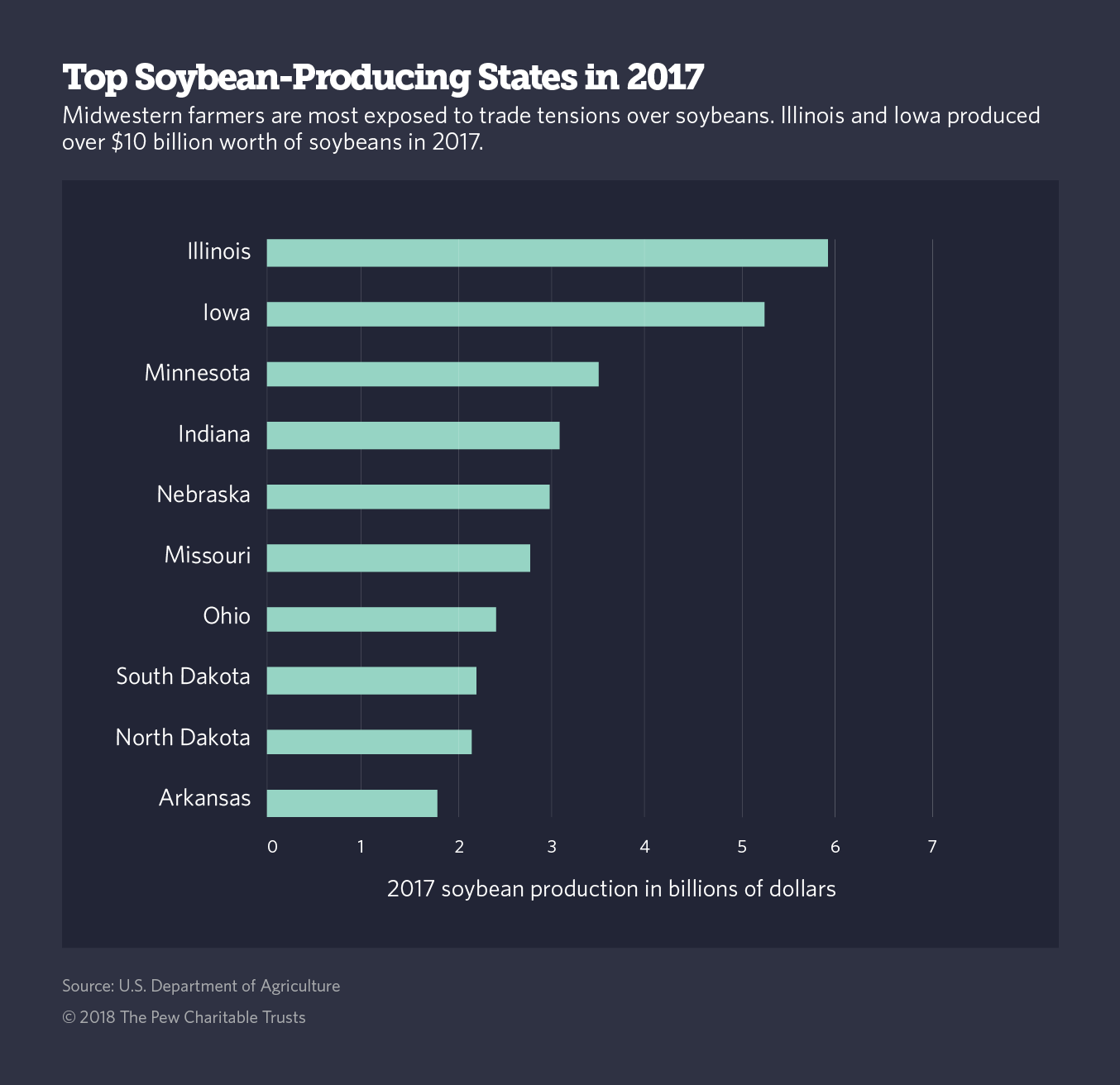 Despite the looming threat of tariffs, soybean markets have remained relatively stable. Yes, sales of soybeans to China dropped in April and May, inspiring a flurry of anxious headlines. But U.S. sales to China typically fall in the spring, when most beans from last year’s harvest have already been sold and the soybean harvest is beginning in Brazil and Argentina.

“The lack of Chinese investment in May was not a big deal,” said Dermot Hayes, a professor of agriculture and economics at Iowa State University. However, if a tariff were in place in time for the fall harvest, it could have a very big impact on prices, he said.

As of May 3, 2.19 million tons of soybeans had been sold to China but not yet exported — up from 2.09 million tons last year. And the price of soybeans has remained more or less stable, said John Baize, an analyst who works with the U.S. Soybean Export Council.

Chinese interest in buying up soybeans yet to be harvested dropped recently, said Dan Basse, president of AgResource, a market research firm. He pointed to the weak demand as evidence that the trade tensions were having an effect.

But Tamara Nelson, senior director of commodities for the Illinois Farm Bureau, said the weak demand also might reflect fears about market dynamics, such as concerns that the United States and Brazil will produce too many beans this year, leading to lower prices.

As for China’s tariff on pork, analysts say the impact is uncertain. “It’s too early to know,” said Jim Monroe, senior director of communications for the National Pork Producers Council, in an email. He noted that pork futures fell when the Chinese tariff was announced.

Iowa State’s Hayes said the drop in lean hog futures prices — reflecting a lost market for pig trotters, intestines and other pig parts unpopular in the United States but considered delicacies in China — cost farmers $9 a pig in March.

Hog farmers were facing a difficult year before the tariff was imposed, Hayes said, because expanding production was set to depress prices. Farmers hoped to export surplus pork to other markets, including China, he said.

Trade Dispute Far From Over

And American and Chinese negotiators apparently haven’t solved the problems that sparked the trade dispute in the first place, said Mike Steenhoek, executive director of the Soy Transportation Coalition, which advocates on transportation issues affecting the soybean industry.

“The fundamental issues, or points of dispute, have not been solved,” he said. Among those are the U.S. government’s position that China is engaging in intellectual property theft. Steenhoek said his group worries the political drama could give trading partners an excuse to buy from other countries.

Farmers are also reassessing the strength of U.S. trade relationships. In March, about half of 400 agricultural producers surveyed by Purdue University said the agricultural sector was likely to get caught up in a trade war.

“I think if you’d asked that question a few years ago, it would have been near zero,” said David Widmar, an agricultural economist who leads the survey.

In the same survey, fewer farmers than in previous months said that now would be a good time to expand their operations.

Farmers already are caught between low commodity prices and rising operational costs. “We’re losing money on the hog operation every day,” Shipley said. Beans and corn prices are level with the cost of production, he said. “If this continues for several years, it’s going to be very concerning.”

It doesn’t help that political tensions threaten to undermine decades of farm associations’ efforts to build trade partnerships with Chinese companies. Heisdorffer said he’s been working with state and national soybean groups for 23 years to boost exports to China. “I’d hate to see all that go down the drain,” he said.